One cannot resist thinking that this Victory Day scene is a bit post-apocalyptic. The sight of the yearly military air parade over Moscow was a welcome sight as I watched several formations of fighter planes and a single Tupolev bomber fly over my home in southeastern Moscow. Tuning in to RT’s “Ruptly” service online yielded a video presented here in full:

The seventy-fifth anniversary of the 1945 victory of the Soviet Union over the forces of Hitler’s Nazi Germany were planned to be be big, no doubt. However, no one planned on participating in a worldwide pandemic, indeed, a pandemic that may be to some degree fabricated and blown out of proportion by people desperately trying to prevent Donald Trump from being reelected this year, probably because he wants to develop good relations with Russia. We will have more on that later, of course.

However, the pandemic is real enough that most of the world is following restrictive measures as indicated by the World Health Organization or similar authorities, and Russia, China’s closest ally, is among the nations experiencing a severe and protracted shutdown. This helped change the organization of the event to a much more muted event, oddly very touching, as this year, President Vladimir Putin read his speech next to the Eternal Flame just outside the Kremlin walls, rather than on the stage before a huge crowd of military and civilian observers.

There were some very interesting sights, which no doubt the US intelligence services will try to study, such as four Kinzhal hypersonic weapons, each shown mounted to its launch platform, the super-fast MiG-31 interceptor: 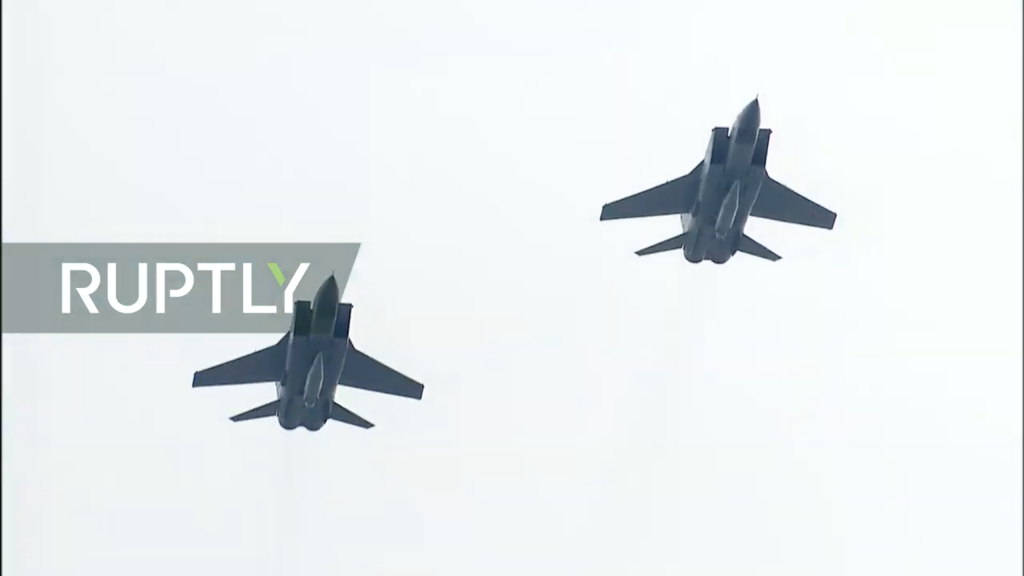 It is not possible to gauge the mood of all of Russia or even of Moscow. Since it is not possible to travel freely around the city right now, we are presented with these images in a real sense of at least “neighborhood” isolation. But the people visible outside my window seemed to be very interested as the planes flew over us (we are below the flight path of some of the fighter and bomber squadrons), and there seems to be a quiet optimism and pride about the nation keeping its yearly tradition in something like its usual form.

The “real” Victory Day celebration has been delayed until sometime after the pandemic is considered “over” and the rhythm of life returns to normal. However, the air parade today was no doubt welcomed by a great many people. It is a sight many of us could physically share in common, and not just online, though the presence of this video material online was maximized to be a great patriotic inspiration.