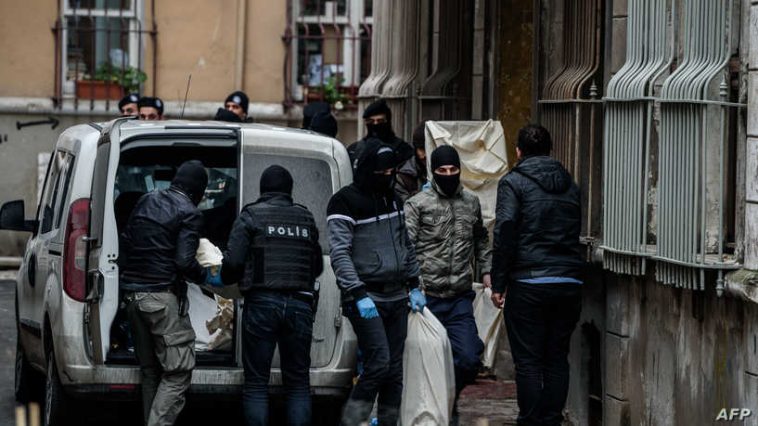 Turkish riot police block the street as Turkish anti-terrorist police officers search the pro-kurdish Peoples’ Democratic Party (HDP) Beyoglu headquarters, on January 8, 2016 in Istanbul. – A Turkish court on January 4, sentenced a co-mayor of a major city in the Kurdish-majority southeast to 15 years in jail on charges of membership of the outlawed Kurdistan Workers Party (PKK). (Photo by OZAN KOSE / AFP)

The Ansar Abi Bakr organization announced that it had claimed responsibility for the explosion of an explosive device yesterday, in conjunction with the passage of a Turkish convoy in Idlib.

Sources reported that an explosion took place in the “Corniche” street in the vicinity of Idlib, in conjunction with the passage of a Turkish military convoy heading to the southern countryside of Idlib, amid a blackout on the Turkish side on the incident, which prevented confirmation of the fact that was there any injuries or deaths among the Turkish soldiers ? or was the damage limited only to materials.

The statement of the militant faction described the Turkish forces as “NATO” forces, referring to Turkey’s membership in the “NATO” alliance, and described them as infidels, indicating that the operation came as a retaliation by the Turks after the Turkish “Gendarmes” killed a Syrian child called “Ahmed Yasser Al-Abd” a few days ago, in the village of Al-Madlousa in the northern countryside of Idlib, near the Turkish border.

However, informed sources say that other parties are standing up these mysterious organizations, and its most likely that it’s “Al-Nusra”, which is trying to indirectly pressure Turkey to grant it more power in the area and not respond to the international pressure calling for “Al-Nusra” to dissolve itself as a terrorist organization.

Dutch wine shop fined thousands of Euros for not putting the...

New York gunman who opened fire at Stop & Shop had...

Three other cops still set to face trial in death of...

Dutch wine shop fined thousands of Euros for not putting the...

New York gunman who opened fire at Stop & Shop had...