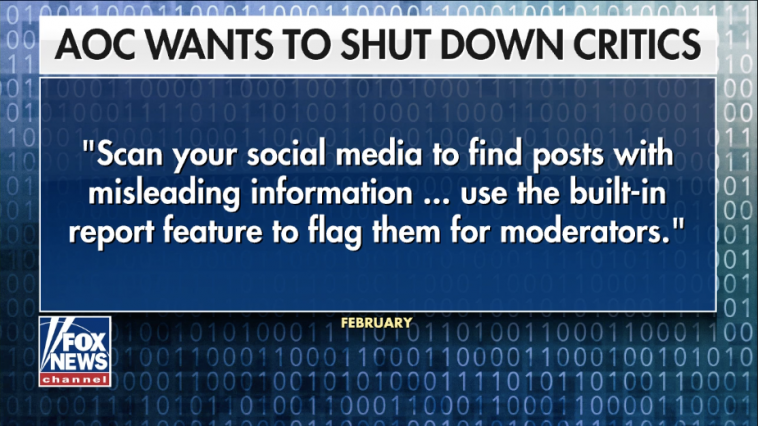 Tucker Carlson Tonight has a video on YouTube that has so far managed to survive there. In it, he describes the meteoric rise of US Representative Alexandria Ocasio-Cortez, who is simultaneously one of the very most prominent members of Congress, its youngest, and most idiotic, quite frankly. However, to her credit (and I seriously do mean this), she is a social media maven, with the biggest Twitter following of anyone in politics right now. She peddles stupidity and generates a tremendous amount of buzz.

She also inspires totalitarianism. Tucker details how her office sent a mass e-mail requesting her supporters to report dissenting opinions to her own to Facebook and Twitter moderators. Her followers listened to her, well enough to cause a man who was mildly critical of AOC’s drivel about Israeli-Palestinian relations to be accosted at his home by a detail sent from the US Capitol Police, claiming he threatened to kill the US representative.

His criticism was certainly not to the point of wanting to kill her or anybody. In fact, his stated criticism is far less severe than things I write here about what AOC does or says. To date, no one has knocked at my US residence looking for me for the things I have said about AOC or any other liberal.

But should I be careful when entering America?

We need to think about this. Only a few years ago one of the things we expressed about our nation is our ability to express our views, to disagree, to dissent and make it known to anyone who wishes to listen that we do not agree with any or all mainstreamed narratives. But now, in the age of imposter presidents and feckless leadership, the whining of a perpetually aggrieved wannabe Communist is getting us in legal trouble?

Tucker is right. It is indeed difficult to believe this is happening in America. But by our choice to be cowed, it is.