The Union of Orthodox Journalists published a rebuke by one of the Athonite monastics directed at Patriarch Bartholomew I of Constantinople for the anti-Christian activity he has been involved in, especially in recent times. The UOJ (www.spzh.news) is the prime source for news coming out about the grievous situation surrounding the legitimization of two Ukrainian schismatic churches without requiring any particular repentance from the leaders of these groups. This led to the formation of a supposedly “autocephalous”, meaning “independent, completely self-ruled” Church billed as an Orthodox Church. This action was condemned by the Moscow Patriarchate, and similarly strong sentiments came from most of the other Orthodox jurisdictions, with a more muted response coming from the Church of Greece and Alexandria, who have both started at least limited commemoration of the hierarchy of the newly formed “Orthodox Church of Ukraine” (OCU).

Patriarch Bartholomew I indicated early on when he authorized all of this that eventually all the Orthodox jurisdictions would come to realize that they have no choice but to accept this move. This of course brings up many disputes related to Church ecclesiology and in particular the question of whether or not the Patriarch of Constantinople has exclusive powers over all Orthodox jurisdictions everywhere, much as the Pope of Rome exercises universal jurisdiction across all of the Roman Catholic Church’s dioceses and “jurisdictions.” Until this recent struggle arose, even the Ecumenical Patriarch stopped short of claiming supremacy the way the Pope of Rome understands it, but with alleged money and aid coming from the United States for the purpose of isolating Russia by removing its presence in the Church in Ukraine, and further by turning other Orthodox jurisdictions against Moscow by approving of and concelebrating with the former schismatic groups, it appears that the Patriarch does think he has the right to wield power outside his jurisdiction. This is disputed as not being quite right because Ukraine historically was under Constantinople a very long time ago, but when that city was overrun by the Turks, Moscow became the defacto Church in the region and for several centuries afterward unto 2018, Constantinople accepted and even affirmed the present order of things.

Now we come to the slow attrition (or progress, depending on one’s point of view) where the Church of Greece and the Patriarch of Alexandria are now on record as considering Metropolitan Epiphany Dumenko as a legitimate ruling hierarch of an autocephalous Orthodox Church. This bothered many monastics on Mount Athos, the Orthodox Christian monastic republic, and one of them, a monk by the name of Gabriel, wrote a letter to the Patriarch which has been translated and reprinted by the Union of Orthodox Journalists. We offer that letter here, for the reader to consider what Father Gabriel says and to consider why he is saying it.

It is long held that the Athonites are the strongest force of conscience historically for the Orthodox Church. It is also known that our hierarchs are far from perfect and that disputes over power and territory are common, with occasional excommunications and censure along the way.

It is not a primrose path in the East – it can be quite rugged, especially if you are a ruling hierarch.

Nevertheless, most of the Orthodox Christian world is deeply concerned with keeping the faith and the Church pure of any influences from the spirit of any age, and so they tend to be very hard-nosed when someone does something that violates the 2000 year old tradition of the Church, and especially if someone permits false teachings to enter the Orthodox communion. In short, we care about keeping the Church safe from attack and from “change” to suit the times.

Here, then is Father Gabriel’s letter. (We have added emphasis and made minor translation corrections in our copy.) Take it as you will.

During your recent visit to the Holy Mountain, an abode of the Holy Mother, I really wanted to receive your blessing and kiss your feet but I can’t do this because it has long been immoral. Do you want to hear why?

1. In fruitless and disingenuous dialogues with heretics, you have betrayed the One Church, Orthodoxy, recognizing many times the “diversity” in the holy teachings of our Church and the ecclesiastical character in sectarian gatherings of monophysites, the pope and protestants of the Most Holy Theotokos and iconoclasts; earlier you officially and irreversibly cursed the Holy Fathers as ‘unfortunate victims of the arch-evil serpent’ in order to deem yourself freed from the need to obey their God-inspired calls.

2. You are an enemy of our Triune God and our Mother of God, because you maintain institutional friendship with conscious and unrepentant heretics and Gentiles, ‘corrupt and sinning and self-condemned’ primates of heresies (Titus: 3.11), the forerunners of dishonor, and with them you will have the same barren future, away from the Living Earth, unless you return to [the] Faith. For St. Chrysostom says: ‘He who accepts the enemies of the Tsar cannot be a friend of the Tsar, he is not worthy of life, but he is let to go with his enemies together and he endures their hands’ and that ‘hatred for the sake of Christ is much better than friendship for His sake’. Do you not remember the God-inspired words of the Holy Scripture: ‘For the ungodly and his ungodliness are both alike hateful unto God’ (Wisdom of Solomon 14, 9)? 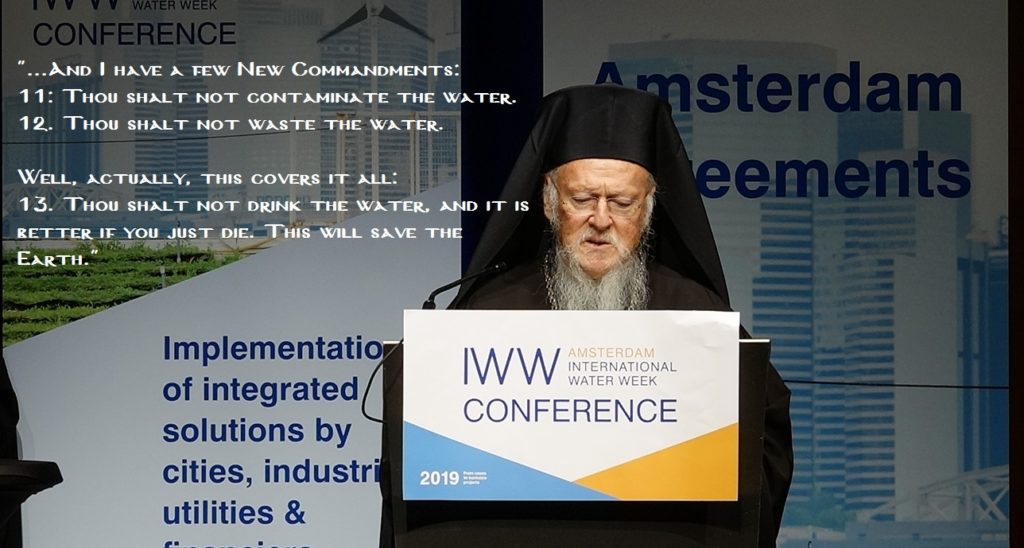 3.Because of your patriarchal illness and under your protection, any heresy and innovation have been harbored not only in the dioceses of the Throne but also in the Church of Greece or elsewhere. Your clergy, honorary conferences and publications of theologians and thinkers, praisers of your “enlightened Patriarchate”, who received awards from Your Holiness, are all pioneers and exarchs of all new theological errors and institutional innovations, from post-patristic theology and ecological and pagan Earth-worship to the reinstatement of schismatics in Ukraine without the latter’s repentance. All these spiritual wolves, which are thunderously condemned by the Orthodox clergy and flock, are admitted and justified by you, and you are their pastor and Patron; in the patristic wording, you are absolutely unanimous and guilty together with them: ‘How can he be not equal with them in his wickedness <…>?’

4. Being another Pope, for three decades now, you have been cultivating a perception in the Church plenitude that everything that any “bishop” and especially the Ecumenical Patriarch arbitrarily wants is the law of the Church. How much you are criticized, like the Pope, by all the Saints whom you criticize for this! How right for you is the condemnation of St. Palamas of the doomed heretic, your predecessor – Patriarch John Kaleka: ‘he himself was the Synod <…>’.

5. By your actions and your teachings you do not honor the Apostolic Canons of the Holy Local and Ecumenical Councils and the teachings of the Fathers, which strictly prohibit joint prayers, friendship and concelebrated worship with heretics, while the Church considers it ‘not proper for the Orthodox, for holy canons cannot be convertible by half …’ Thus, you show that you do not believe in God, in the immortality of the soul, in the invisible world, in Paradise and Hell, in the Future Judgment and in retribution. Perhaps, Your Holiness, your frequent meetings with representatives and philanthropists from Masonic and other related orders testify to you and your somewhat mysterious and high status and position which are incompatible and hostile to the Orthodox Faith?

6. Unfortunately, those who are familiar with tactful leadership of Your Holiness and your employees, which does not foresee legitimate church processes, those who oppose your methods of spreading ecumenism are isolated in their own environment and are forced to either retreat or remain silent. Where possible, you use political leverage, as it was the case on the Holy Mountain, and what Athanasius the Great considers specific to the heresy of Arianism <…>.

Of course, Your Holiness has declared Orthodoxy in your statements many times, but they are contrary to your actions and your primary duty. Yet, according to Gregory Palamas, even if you had slightest hesitations concerning Orthodoxy, you would not be worthy of the holy rank <…>.

You forced the soul of every Orthodox Greek to face the dilemma: ‘either to devote oneself to the love of the God-man of Christ or to the heretic archon-patriarch’. This is exactly what St. Cyril of Alexandria writes to the heretic Primate of Constantinople and your predecessor Nestorius 1600 years ago: ‘What happened to us who are required through godliness to love Christ the Savior above all of us? <…>’ No doubt, Your Holiness, the damage you have inflicted on the Body of Christ, on the Church, is a rebellion against the Savior himself.

Over 28 years of your Patriarchy, you have never lightened the hearts of true Orthodox Christians – you lighten only secular hearts being rendered honors by the ‘princes of this evil world’ not for the glory of salvific Orthodoxy but for the sake of overthrowing Orthodoxy initiated by Your Holiness in every possible way.

Repent and get off the broad and slippery path you are constantly moving along, which is detrimental to the Orthodox faith and inter-Orthodox unity of millions of baptized souls, for which you will give a fearful ‘ecumenical’ answer to the Supreme Judge. Beware that uncreated and endless hell is full of unrepentant hierarchs and patriarchs, for the church story knows perfectly well about the condemned heresiarchs and their high retinue, the first of them being the fallen Apostle and the traitor Judas Iscariot, since the Divine Judgment will begin with us, churchmen: ‘For it is time for judgment to begin with God’s household; and if it begins with us, what will the outcome be for those who do not obey the gospel of God?’ (1 Pet. 4:17). So, ‘walk’, Your Holiness, ‘<…> while you have the light, before darkness overtakes you’ (John 12:35, 9:4).