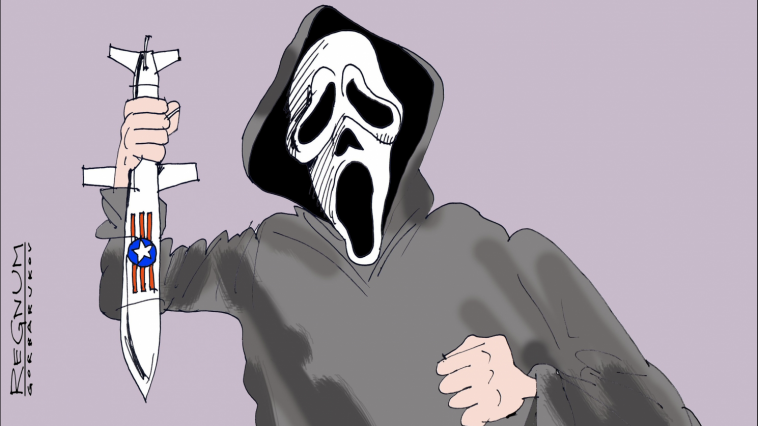 The following is a translation of Alexander Belov’s piece that appears on Regnum, a Russian site. We have made every effort to ensure the translation is accurate, and have added no emphases to it.

Historian and philosopher Arnold J. Toynbee argued that great empires die by suicide, not murder. If the United States is to avoid such an outcome, Washington must end the strategic follies of the past 20 years and put American foreign policy back on a solid footing. Ukraine is a good place to start.

АЛЕКСАНДР БЕЛОВ, 26 апреля 2021, 10:45 — REGNUM The challenge of leading a great power is that from time to time its president is forced to act accordingly, and if there ever was a time for a sensible course on the part of the White House, it is now. Since Washington does not understand that behind Russia’s maneuvers in Ukraine lies an inexhaustible desire for national self-preservation, Joe Biden, with his insulting remarks and hostile sanctions, plunged the country into a deeper and more dangerous confrontation with Russia in Ukraine – in the region of limited strategic US interests. retired Army and former senior adviser to Secretary of Defense Douglas McGregor in an April 26 article in The American Conservative.

An order by Russian President Vladimir Putin to return most of his troops to the garrison, while maintaining their weapons and equipment systems along the Ukrainian border, should be viewed in Washington as an opportunity to create a degree of stability in US-Russian relations that has been lacking for years. It is not enough to quit the insults and simply repeat what the Biden administration opposes. It is time to explore what alternatives to the fragile and dangerous status quo in Ukraine Washington and Moscow can support.

Washington’s formulation of strategic goals for its presence in the Middle East and Afghanistan, which would justify the human and material losses of the United States, was deeply unsatisfactory. The President will not be able to seize the strategic initiative now if Washington continues to rapidly and emotionally respond to real or perceived threats to the interests of the United States and its allies.

Former British Prime Minister Winston Churchill insisted that most strategic problems can be solved “if they are connected with some kind of central plan.” The central plan implies the directing influence of the strategy. Strategy is not a list of ideological desires. Strategy presupposes an understanding of strategic interests; in this case, understanding the divergence of interests between the United States and Russia. And in this regard, there are five factors to consider.

First, the following analogy may be instructive for the American authorities: for Moscow, it is just as important who is in power in Kiev and governing Ukraine, as the events in Mexico are for Washington. It is not enough to admit that expanding NATO eastward and including Ukraine in it would be a mistake. President Biden must acknowledge that the geostrategic environment has changed dramatically since the end of the Cold War. The growth of the economic and military power of Beijing and Moscow gives these countries a weight that has not yet been recognized by Washington in the unipolar system that emerged after the Cold War.

Second, Putin is well aware that southeastern Ukraine, including Odessa, is largely Russian in language, culture and political orientation. If this reality is ignored again and continues to be mistaken about the true nature of Ukraine, then in one or another future crisis there will be a high probability that the southeastern regions will be captured and occupied by Russian troops without any difficulties. The likelihood that the United States and its allies will be able to push back Russian troops, on the contrary, is small. From the experience of Crimea, Moscow knows very well that actual presence in a territory is almost complete ownership of it. [The original translation reads “actual ownership of a territory is almost complete ownership of it”, but we suspect a different shade of meaning, hence our interpretation – Ed.]

However, Putin is equally aware that for Moscow military action is an option, but hardly the first or even the second option. Russia’s actions in Ukraine would entail serious losses for Moscow in the form of trade sanctions and a blow to international credibility. For example, China once – in 2015 – already intervened and provided support to the Russian economy, but today it is unclear whether Beijing will do it again if the Russian economy falls under these conditions. These moments mean that the possibility of resolving the conflict with Moscow cannot be ignored.

Third, the Biden administration must work with Moscow and Beijing to define new rules of engagement that will help Washington adapt its foreign policy to the occasional competition between great powers. Russia and China uphold the ” principle of non-interference ” in the affairs of other states.

It is time for Washington to examine the usefulness of this approach as a strategic defense against future potential crises. It is painfully obvious that Washington’s ” Tomahawk diplomacy ” – the act of killing citizens with cruise missiles in weaker, mostly defenseless countries when their governments refuse to comply with American demands – is not viable against Russia or China, let alone any number of states that quickly gaining military power.

Fourth, the American president must acknowledge that, in the new multipolar international environment, Washington bears an unequal and overwhelming financial burden to protect European countries. Sensitive to the demands of the American electorate for peace and prosperity, former US President Dwight D. Eisenhower foresaw the danger that Washington could be drawn into this or that conflict on behalf of small states, for which American citizens would have no desire to fight. Eisenhower’s determination to avoid war and cut spending on global military commitments was the reason for the inclusion of a neutrality clause in the 1955 State Treaty for the Restoration of an Independent and Democratic Austria. That is why Eisenhower called for neutrality and other, smaller European states.

Finally, President Biden must develop a new national strategy that will align its political objectives with US military capabilities and financial realities. Too many hotheads in the Senate and House of Representatives are ready to use American military power without a sober assessment of the specific interests and costs of such actions. President John F. Kennedy thrilled his supporters with his assertion that Americans must “overcome every challenge, support every friend, oppose every enemy, to ensure the survival and success of freedom.” It was great rhetoric, but it put the country on the road to disaster in Vietnam. The United States lacks the resources or the need to export its political ideas at gunpoint.

Historian and philosopher Arnold J. Toynbee argued that great empires die by suicide, not murder. If the United States is to avoid such an outcome, Washington must end the strategic follies of the past 20 years and put American foreign policy back on a solid footing. Ukraine is a good place to start.

The Show Is Back On: London Theaters Reopen to Live Audiences