Child abuse cases and reports have decreased since the beginning of COVID-19, but the problem has possibly intensified and is simply not being reported due in large part to remote schooling, according to the Associated Press.

The analysis by the Associated Press found that abuse reports, cases, investigations, allegations and interventions have dropped at a large rates. More than 400,00 fewer child welfare concerns were reported during the pandemic and 200,000 fewer abuse or neglect investigations were reported when compared to the same time span during 2019, according to the analysis. (RELATED: Listen To The Science — It’s 100% Clear Kids Should Be In School)

This loss of reports means a larger potential for harm because “there has not all of the sudden been a cure for child abuse and neglect,” according to Amy Harfeld, an expert of child abuse deaths at the Children’s Advocacy Institute. “Children who are experiencing abuse or neglect at home are only coming to the attention of CPS much further down the road than they normally would. … When families aren’t getting what they need, there are consequences for everyone.”

Traditionally the U.S. system relies on teachers, doctors and police to report possible abuse and neglect to Child Protective Service (CPS). Many of the reports that came to CPS were from school administrators, teachers and coaches, as well as other adults in the school system. School administrators are often trained to notice and identify warning signs for abuse and are required to report them.

Since the beginning of the pandemic, however, reports from school sources fell as the U.S. switched to online schooling by nearly 59%, according to the Associated Press analysis. There was a 4% reported decline from other types of sources. 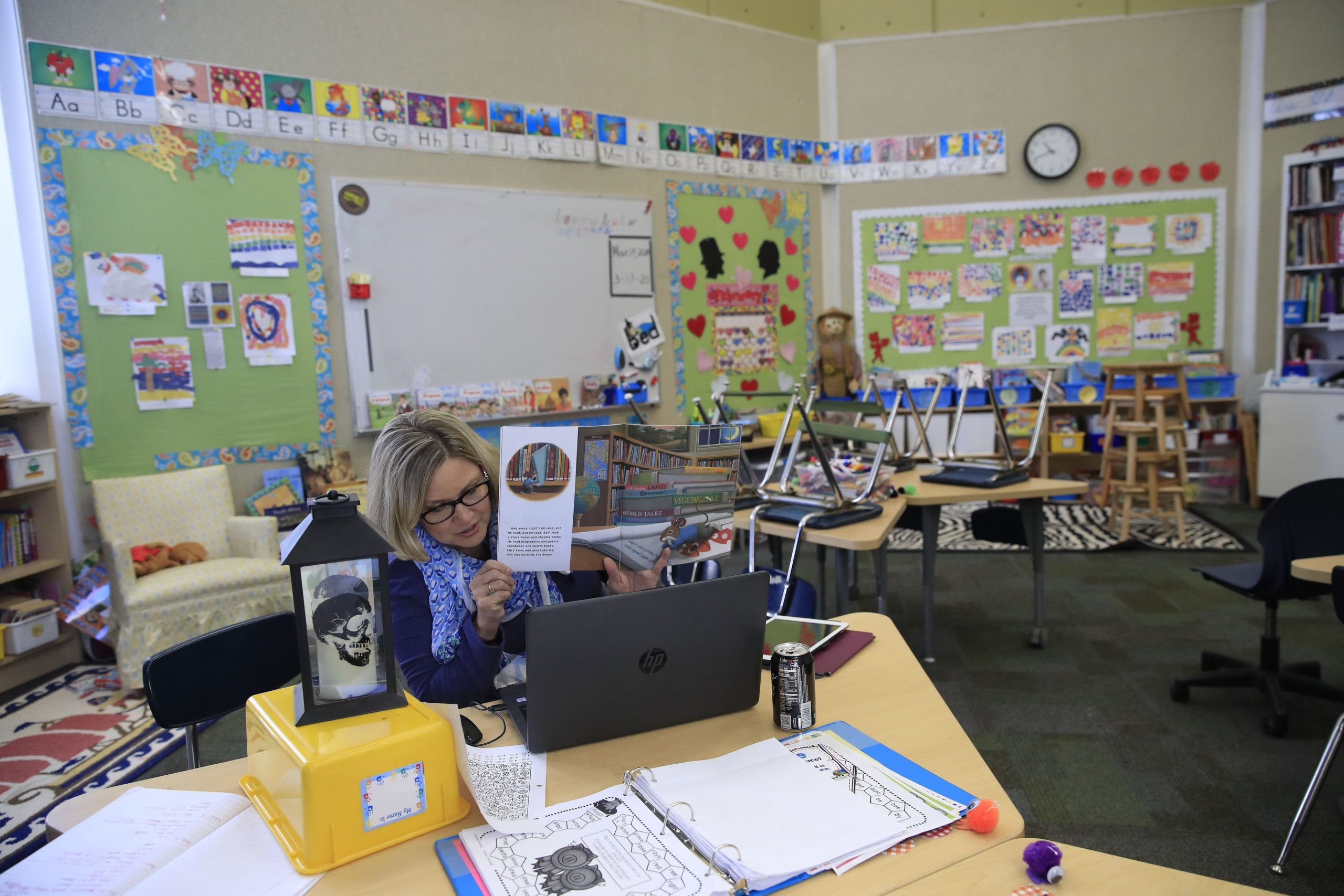 LOUISVILLE, KENTUCKY – APRIL 15: Joanne Collins Brock , a second grade teacher at St Francis School (Goshen) , teaches online in her empty classroom on April 15, 2020 in Goshen, Kentucky. Brock has been teaching daily online to her students because of the closure of schools in Kentucky due to the Coronavirus (COVID-19) pandemic. (Photo by Andy Lyons/Getty Images)

In Pennsylvania, almost 25% of families did not participate in online schooling. For this reason, the usual truancy laws in Pennsylvania and several other states — stating that if a student didn’t show up the school had to report it to CPS — no longer applied, according to the Associated Press.

Officials may also be dealing with more severe cases of child abuse than normal in several states, the Associated Press reported. Death and serious injuries in these cases were also found to be on the rise. (Advocates Of Child Abuse Victims Fear Continued Rise In Abuse Reports Due To Lockdown Orders)

Nebraska, for instance, had fewer child abuse and neglect reports during the time period of the pandemic compared to the previous year, but more cases that required a 24-hour response. A 24-hour response is saved for cases of priority in which the child is in more danger, according to the Associated Press.

Maryland also investigated a substantially lower amount of child abuse and neglect reports, but saw an uptick of about 1,500 prior victim reports from the previous year. Louisiana saw a similar decrease in reports overall and increase in the severity of the ones it did document. They also found more domestic violence with weapons and serious injuries, according to the analysis.

Pennsylvania had 105 deaths investigated for child abuse — 11 more than 2019, according to the analysis. The state also saw a 67% increase in severe injuries. Other states such as Alabama, Ohio, Texas, Kentucky, Maryland and Arizona also reportedly saw an increase.

“These decreases do not tell us that child abuse and neglect is going unreported. It’s possible that families and communities came together and weathered this storm together,” said Minna Castillo Cohen, director of Colorado’s Office of Children, Youth and Families.

However, the rate of substantiated cases of neglect and abuse remained steady both during the pandemic and the year prior, according to the analysis — despite the fact of reduced school official referrals.

“Even if teachers were saying ‘I’m going to report because I think this child seems dirty,’ we do that so the child can get the attention and some intervention can happen. Whether it’s abuse or neglect or poverty, it is still a child in need,” said Laurel Thompson, of the School Social Work Association of America told the Associated Press.

FACT CHECK: Does This Video Show Brazilians Resisting Coronavirus Restrictions At The Beach?