. @IAmSophiaNelson is no longer affiliated with The Lincoln Project.

Words and actions matter. We apologize to those with intellectual disabilities and their families, who too often must deal with slurs.

We wish Sophia the best.

In a series of tweets Wednesday morning, Nelson said that it was “only right” that she step down from her affiliation with the organization and described their mission to defeat President Trump in November as “too critical.”

Good morning. It is only right that I step down from my affiliation with @ProjectLincoln as our mission is too critical to defeat Pres. Trump come November. I shouldn’t have used the “R” word to describe the President’s conduct. We learn from our mistakes. My apology stands.

I fully agree with this and accept that I should and have stepped down. The Lincoln project is awesome. Does great work. And I know you will be successful in your efforts to take on President Trump in the fall. All my best to the team! https://t.co/ZuWjRhBb4y

Nelson had responded to a tweet Tuesday afternoon from The Lincoln Project co-founder Rick Wilson criticizing President Trump’s coronavirus response by using the word, which led to swift bipartisan backlash. 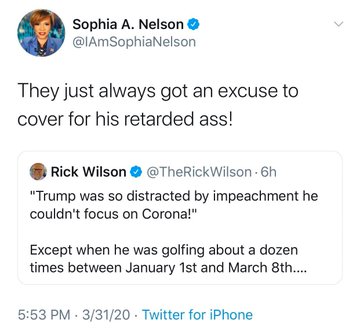 The Lincoln Project has not responded to requests for comment from the Daily Caller.

Schumer: We’ll Move on COVID Relief without GOP if Need Be, ‘Must Get It Done Quickly’

Poll: Only One in Five Americans Believe Biden Can Unify the Country

Biden begins the week with WOKE THEME BASED Executive Orders

Biden begins the week with WOKE THEME BASED Executive Orders