Atlantic Magazine on Tuesday gave Hunter Biden positive reviews for his novice “artwork,” which shows a certain “base-level” of skill.

“Hunter’s artwork isn’t bad, per se. A certain base-level skill is evident in the paintings,” the publication wrote, citing a Washington Post art critic who has called Hunter’s art as comparable to “a cafe painter.”

“By which I mean,” the critic continued, “You see a certain kind of art in coffee shops, and some of it is OK and a lot of it is bad, and sometimes it’s surprisingly good. But you wouldn’t, unless you were related to the artist, spend more than $1,000 on it.”

Hunter’s art, which will debut in September at Los Angeles and New York art shows, will be sold to anonymous buyers for up to $500,000 by an art dealer who has close ties to Chinese buyers. The dates of the shows have not been divulged due to the sensitive nature of the president’s son personally showcasing his art to prospective in-person buyers at the art events.

“The only way to address these issues is with greater transparency — not less,” he told Breitbart News. “Their proposed solution is greater secrecy, not transparency. And they are essentially saying, ‘Trust Us.’ Joe and Hunter Biden’s track record on such matters gives us no reason to trust them.”

But Hunter has defended his new career choice, sneering at art and watchdog critics alike.

“I’m [the] most famous artist in MAGA world, at least,” Hunter facetiously said before suggesting President Joe Biden believes “everything” Hunter does “should be in National Gallery” of Art. WASHINGTON, D.C. – JANUARY 20: Vice-President Joe Biden and sons Hunter Biden (L) and Beau Biden walk in the Inaugural Parade January 20, 2009 in Washington, DC. Barack Obama was sworn in as the 44th President of the United States, becoming the first African-American to be elected President of the US. (Photo by David McNew/Getty Images)

Indeed, Hunter’s artwork reportedly hangs in Jill Biden’s taxpayer-funded White House office for any wealthy or high-ranking government official to view while visiting. It is not known if the displayed art is intended to publicize Hunter’s validity as a novice artist, or if the showcasing is meant to promote the artwork to those who may wander into Dr. Jill Biden’s office.

Such brazen promotion of Hunter’s artwork has caught the eye of lawmakers, who have introduced legislation to end Hunter’s new business scheme.

“Who wants to buy a Hunter Biden painting for $500, much less $500,000. Some of the pictures of his art have been online; it looks like a coronavirus got sick with a bacteria,” Sen. Tom Cotton (R-AR) quipped in July.

Meanwhile, Rep. Michael Waltz (R-FL) has introduced legislation to block Hunter’s “shameless grift.” The bill is “aimed at stopping the obvious and shameless grift that’s going on with Hunter Biden’s art sales, for which he is obviously not qualified to do and is only doing to continue to profit off of his family name,” Waltz told Fox News.

The White House, however, has defended Joe Biden’s son from his critics. “I can tell you that after careful consideration, a system has been established that allows for Hunter Biden to work in his profession within reasonable safeguards,” press secretary Jen Psaki stated. “He has the right to pursue an artistic career just like any child of the president has the right to pursue a career.” 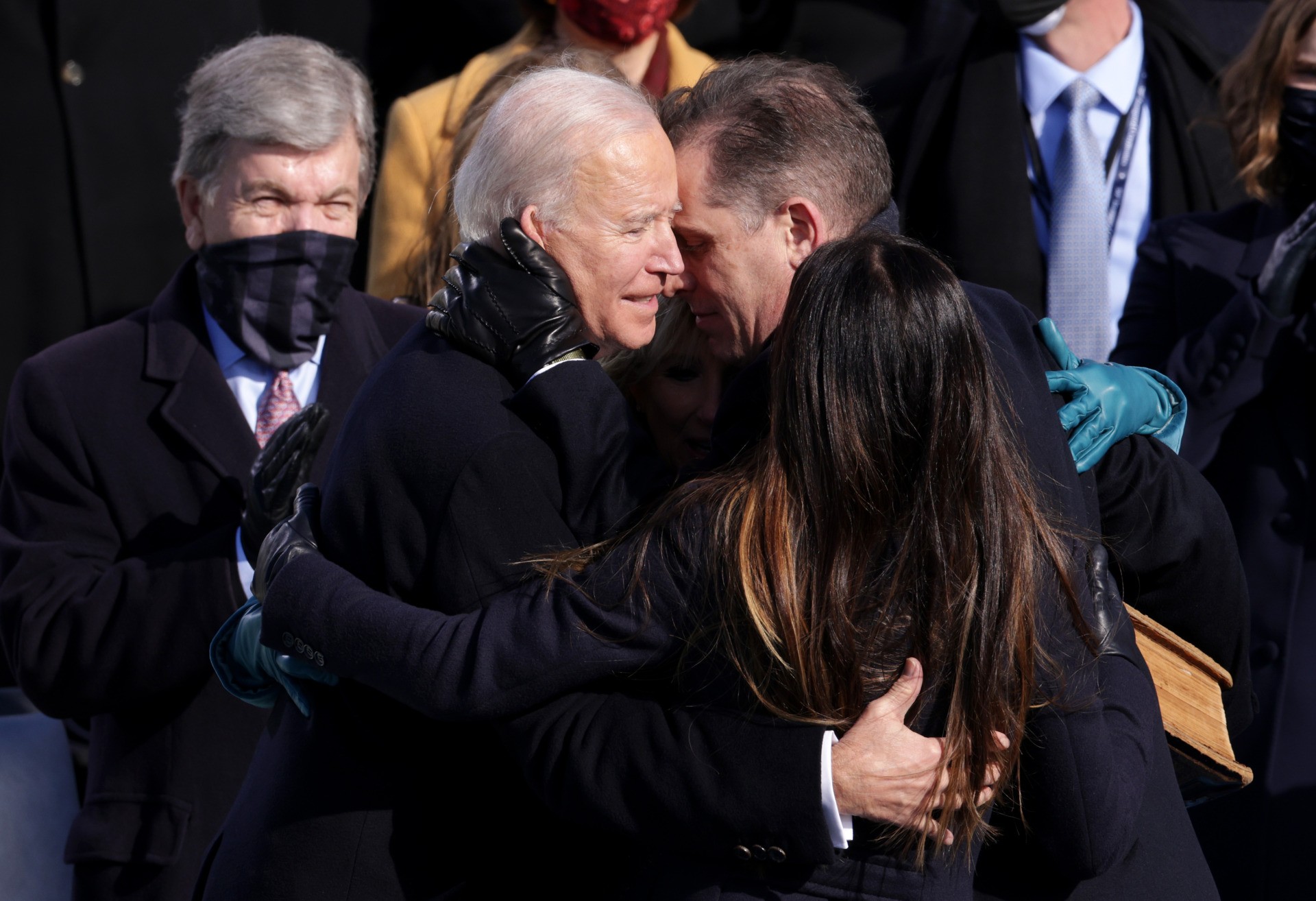 WASHINGTON, DC – JANUARY 20: President Joe Biden hugs his son Hunter Biden and daughter Ashley Biden after being sworn in as U.S. president during his inauguration on the West Front of the U.S. Capitol on January 20, 2021 in Washington, DC. During today’s inauguration ceremony Joe Biden becomes the 46th president of the United States. (Photo by Alex Wong/Getty Images)

In a congressional letter addressed to Hunter’s art dealer, Georges Bergès, Comer writes it “is the Oversight Committee’s responsibly to scrutinize Mr. Biden’s business activities because he [Bergès] chooses to conduct them in the most murky and corrupt corners of international affairs.” The letter also speaks to Bergès’ connections to China and the art industry’s “commodities of fluid and opaque value” that “evade sanctions.”

Art dealer Bergès, who was reportedly sued for fraud and breach of contract in 2016 by an investor in his gallery, also filed for personal bankruptcy in 1998; “his creditors included credit card companies, a bank, a jeweler and furniture retailer Pier One Imports.”

Bergès has also flouted strong ties to China, which is concerning, given Hunter’s former work history with his family. Breitbart News previously explained:

Hunter’s past work as his father served as vice president — striking deals with Chinese officials and raking in tens of thousands of dollars per month serving on the board of Burisma, a Ukrainian oligarch-owned oil and gas company, despite having no experience in the energy sector. His father would later brag about threatening to withhold aid from Ukraine unless officials fired the prosecutor conducting a corruption investigation into Burisma.

Despite President Joe Biden’s son’s new venture, Hunter Biden told Artnet, “My dad loves everything that I do, and so I’ll leave it at that.”

‘Why Would I Tell You That Now?’: Pelosi Balks At Question About Plans To Run For Re-Election

Wisconsin Is A -3 Favorite Against Iowa