Chinese health authorities forcibly quarantined all 670 students and staff of a university campus in Beijing’s Fangshan district on Thursday after at least one person on campus tested positive for the Chinese coronavirus, the South China Morning Post (SCMP) reported.

Fangshan district spokesman Zhang Mingzhi told reporters on May 19 that all people residing on the Beijing Institute of Technology’s Fangshan campus were “transferred to an isolation facility” earlier that same day after health authorities deemed the campus and its surrounding area at “high risk” for the Chinese coronavirus.

“After receiving the report that someone tested positive on campus, the Fangshan district immediately organised nucleic acid tests and rapid antigen tests for everyone,” he said, adding that “contact tracing was also under way.”

Beijing is currently experiencing its latest epidemic of the Chinese coronavirus. The city of 21.3 million residents first detected the outbreak on April 22 before ordering its first round of mass testing for the disease on April 25. Chaoyang was the first residential district to lock down as part of Beijing’s latest Chinese coronavirus epidemic on April 28.

Both Chaoyang district and Fangshan district have imposed anti-epidemic movement restrictions at their local branches of the Beijing University of Technology in recent days. A May 19 report by Xinhua, China’s official state press agency, revealed that the Beijing University of Technology campus in Chaoyang district has been under a strict lockdown since at least April 26. Xinhua referred to the lockdown as a system of “closed management,” but revealed details of the measure that suggested students of the Chaoyang campus have been sealed inside their dormitory rooms for the past 23 days. 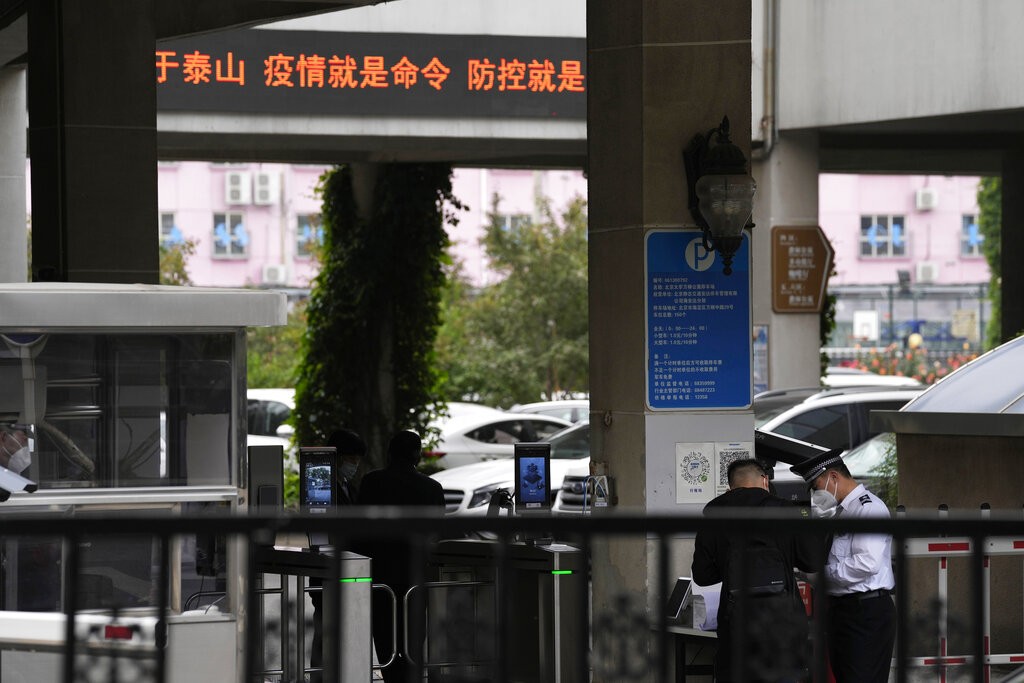 A security guard checks a man entering the Wanliu Campus of Peking University campus near a display showing slogans, part of which reads “The epidemic is the order, prevention control is the responsibility ” on Tuesday, May 17, 2022, in Beijing, China. (AP Photo/Ng Han Guan)

“Zhao [a student supervisor] went straight to visit her students in their dormitories to record their health data and distribute fruit. She has also been tasked with accompanying students to hospitals when needed and giving online classes on COVID-19 [Chinese coronavirus] prevention and control,” the news agency detailed.

Xinhua described Zhao, 40, as having been tasked with “guarding against” transmission of the Chinese coronavirus within student dormitories.

“In addition to serving the students in her charge, Zhao also works as a volunteer, assisting with mass nucleic acid testing on campus and distributing masks and other daily necessities to people,” according to the report.

Xinhua described Zhao’s tasks as part of a “relentless” anti-epidemic effort by the Beijing University of Technology campus in Chaoyang district that has lasted for “weeks.”

Zhao herself has been forbidden from leaving the Chaoyang campus since April 26 in accordance with the university’s strict lockdown rules.

“I stay put on campus these days and can’t go back home to see my son,” she told Xinhua on May 19.

Authorities at Peking University in Beijing erected metal fences outside student dormitories on May 15 that effectively sealed pupils inside their rooms in the name of preventing Chinese coronavirus transmission. Some students forcibly tore down sections of the fence later on May 15, according to eyewitness video footage.