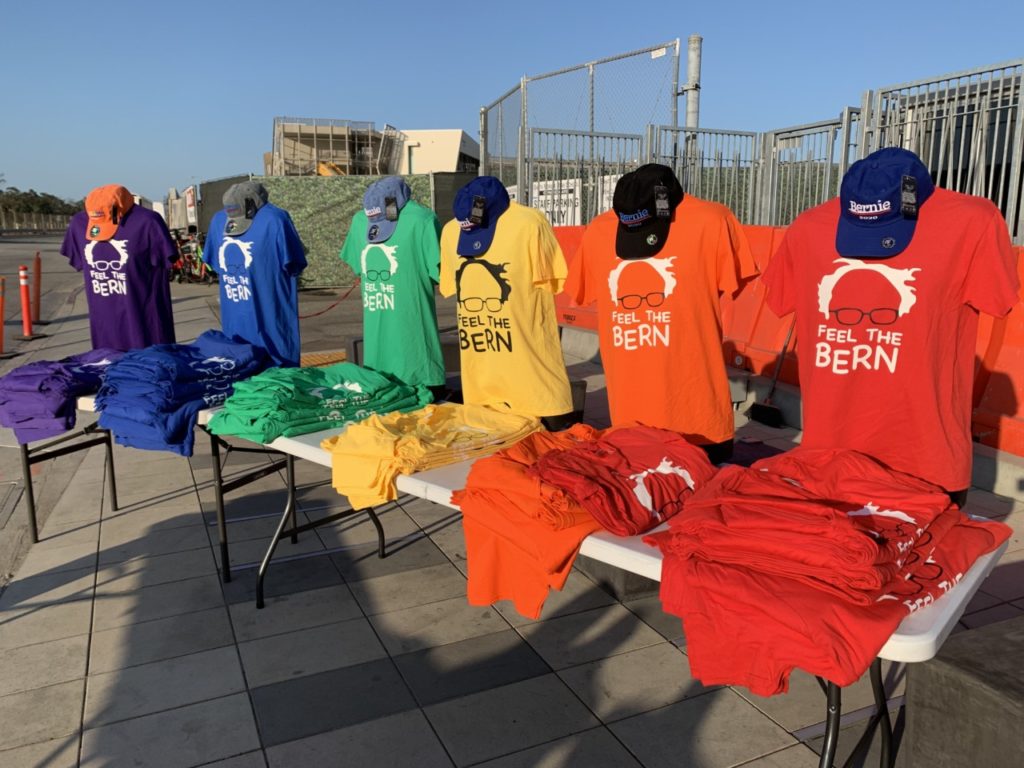 Once the frontrunner in the race for the Democratic Party presidential nomination, Sanders dropped back in many polls after the entrance of former Vice President Joe Biden, and has battled for second place in many states with Sens. Elizabeth Warren (D-MA) and Kamala Harris (D-CA).

He has also had several rough days, after a labor dispute with campaign workers — the first of any campaign to unionize — burst into public view. They argued that Sanders was not paying them the $15 per hour that he demanded as a federal minimum wage. The campaign reached an agreement with the workers to pay $15 — and cut back hours.

In his address, Sanders went through a familiar refrain of attack lines against Wall Street, the pharmaceutical industry, and the fossil fuel industry.

“Today, I say to the fossil fuel industry–” he began.

“Fuck you!” shouted one supporter, to cheers and laughter.

“That is one way of saying it,” Sanders said, raising his eyebrows, “not exactly the way I was going to say it.”

The socialist from Vermont has a strong following in the wealthy neighborhoods on the west side of Los Angeles, and in the city of Santa Monica in particular. In 2016, Sanders held his California victory party in the city, amidst high expectations, but lost a decisive race to former Secretary of State Hillary Clinton.

One warmup speaker, Pacific Palisades Democratic Club president Erika Feresten, attacked other candidates for “co-opting” Sanders’s “Medicare for All” language, likening it to “a band-aid for cancer.”

In 2016, Sanders was the first presidential candidate to introduce a plan for “single-payer,” government-run health insurance. Since then, his policy has been taken up by much of the presidential field — even at the cost of ending private health insurance — although Biden and a few other candidates have proposed offering Medicare as an option, rather than as a replacement for the current system.

“For some of these folks — I’m trying to understand: did they believe all along, or of they believe just because they’re running for president?”

Other speakers slammed President Donald Trump for his immigration policies and accused him of racism.

The audience filled about three-fourths of the Greek theater at the high school, numbering over 1,000 people — though at least one attendee worried that the crowd seemed smaller than in 2016.

So I’m at the Bernie rally in Santa Monica right there’s maybe 500 people here right now so I’m a little concerned. In 2016 we had 4 times as many people, lines that went for several blocks. #BernieSanders #Bernie2020 #BernieBeatsTrump pic.twitter.com/HdnlAOGeK8

California is considered an important battleground in the 2020 race, since the state has moved its primary from June to “Super Tuesday” in early March, making it the fifth contest rather than one of the last.

Joel B. Pollak is Senior Editor-at-Large at Breitbart News. He earned an A.B. in Social Studies and Environmental Science and Public Policy from Harvard College, and a J.D. from Harvard Law School. He is a winner of the 2018 Robert Novak Journalism Alumni Fellowship. He is also the co-author of How Trump Won: The Inside Story of a Revolution, which is available from Regnery. Follow him on Twitter at @joelpollak.