This is not tremendously new information, but the accompanying video shows an interesting trend about Kamala Harris in the weekly poll numbers. She has lost a great deal of favorability. Below are screen grabs showing approval polls for each week since she was installed in her post as “Vice President”. 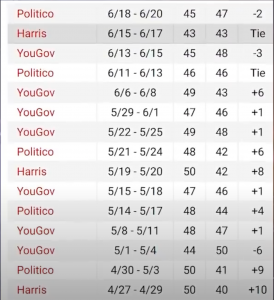 The movement is as much as 17 points in the negative, and earlier polls than April 27 scored Harris as high as +17.

While we can all say polls are skewed (because they are), the point of observation here is the trend. Like COVID-19 trackers, the number of new cases are not likely to be the actual numbers, because many people get COVID and never know it or say anything about it. However, the use of collecting information about the virus progress is best when it is used to show trends – increasing or decreasing, and by how much, and so on.

We see a major problem with Mrs. Harris for sure. Further polling showed that between 60 and 64% of polled voters (including 43% of Democrats polled) said Kamala Harris is not fit for office.

This presents us with a big problem, though possibly by design:

Joe Biden is doing his “President” thing very badly. The poor man has to be propped up by prepared questions and notecards with answers, he bumbles, he brainfreezes, and as he does so, he gives a lot of fodder to conservative media that all clamor for him to resign or be subjected to removal from office via the 25th Amendment. Things like this:

But the result of that would be to put Kama-ha-ha-ha-la into the top spot in the Oval Orifice. (Yes, I said it.)

The prospect of doing this creates the second problem: Who on earth would want that? How would anything even work with Kamala Harris as President, even with behind the scenes handling?

Because of this, it seems very unlikely that Biden will finish his time in the Oval early. As bad as he is, he is miles and miles ahead of Kamala Harris in both policy and presentability.  After all, even those of us who completely do not agree that he is legitimately the President, and those of us highly critical and in disagreement with his policies and actions often cannot really hate the man; the reaction seems to be more towards pity than disgust.

Kamala does not inspire even pity. She seems to annoy the hell out of people. Laughing, cackling really at reporters during interview, snarky elitist “we’ve been to the border…” answers that are nasty, unprepared and totally uninformed… who would want this disaster to try running the United States?

We are really in a bind on this one. You see, if for some reason Kamala gets passed over for President, the office passes on to the third in line. Mrs. Nancy Pelosi, Speaker of the House. This shuddering, Trump-hating until she dies nightmare still retains some level of acuity in the House to be sure, but again – as Chief Executive?

Let’s look further down the list of the order of succession:

General Lloyd Austin was confirmed with a very solid Senate majority, 93-2, so it seems that he has the bonafides to do a decent interim job. But in the first seven possibilities, there are precious few chances that, in the event of Joe Biden’s departure from office, America would have a leader that would be more likely to protect the nation.

This is a very bad situation, and one has to wonder how it got this way. While it is possible to discuss conspiracy theories till the cows come home, there are a number of very practical, non-conspiratorial facts that need to be taken into account if the American nation is to be preserved:

After all, the United States is a representative republic. There are plenty of very poor people, like Kamala Harris, who simply love power for their own purposes. There are also plenty of very good people who honestly understand that serving their nation is an honor and a privilege, but also a very high calling, not to be trifled with.

It seems that in recent decades most of us have forgotten this fact. Thank God, Donald Trump remembered it and still does. That is why he was so dynamic as President – he understood the job better than anyone has since Ronald Reagan, at least. He understood the Presidency as a way to give back to the nation that gave so much success to him.

This is the right way of doing things. It ought to make very clear sense, especially now, what the contrast between good leadership and bad leadership really is.