A brave black lab named Beauty saved her helpless duck friends from an alligator that was looking for its next meal.

The ordeal occurred at Lake Powell on the western side of Panama City Beach, Florida, when beauty followed the three ducks, Cress, Downey, and Dot into the water WHJG reports. Owner Misti Roberts explained that Beauty “is just super sweet to them, it’s not like you would think with a duck and dog.”

As beauty neared the shore of the lake, Roberts saw an eight to ten foot alligator. “I saw an alligator right at the edge of the sand, not on the sand but right on the edge,” she recalled. Beauty became concerned about her dear duck pals and tried to scare off the alligator when she was attacked. 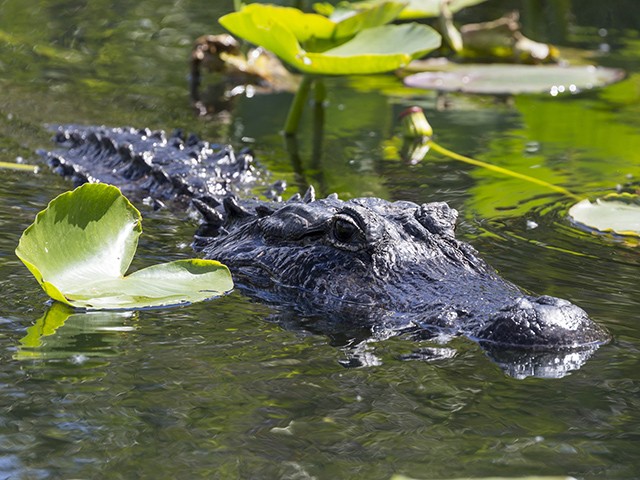 A wild alligator is seen in the waters along the side of the Anhinga Trail in Everglades National Park, Florida. (BlueBarronPhoto/Getty Images)

Roberts noticed something was wrong with Beauty right after the attack. “And then I realized she couldn’t get up the stairs, so I ran down and then obviously there was just blood everywhere and I realized she had been hurt,” she explained.

The black lab was rushed to Vets Pets where her injuries were assessed by Dr. Gerrie Barr. According to Barr, “when we first got Beauty here.. she was unstable and in shock, she had multiple soft tissue wounds and an obvious leg issue.” Dr. Barr diagnosed Beauty with a broken femur, which was addressed with surgery on Saturday. Barr expects the pup to make a full recovery within six to eight weeks. “They are her buddies, there is no question about that. Give her credit for saving their lives,” Barr explained.

Owner Misti Roberts provided an update on Beauty’s status via her Facebook page on September 19. “Update on Beauty! She made it through surgery! Difficult, long surgery, but it went well. We get to see her tomorrow and she should be able to come home later this week,” Roberts wrote.

Update on Beauty! She made it through surgery! Difficult, long surgery, but it went well! We get to see her tomorrow and she should be able To Come home later this week.

Labrador retrievers are great companions that are versatile, good-natured, and loyal. “Today’s Lab is as good-natured and hardworking as their ancestors, and they’re also America’s most popular breed,” according to Dog Time. “Modern Labs work as retrievers for hunters, assistance dogs, show competitors, and search and rescue dogs, among other canine jobs.”

Watch: Buttigieg Responds to FNC’s Carlson — He Doesn’t Understand the ‘Concept of Bottle-Feeding’

Rivera on Unvaccinated Kyrie Irving: ‘I Am Mad’ — ‘He’s Hurting Everybody’