LONDON (AP) – A teenager was arrested on suspicion of attempted murder Sunday after a 6-year-old child was thrown from the 10th floor viewing platform at London’s Tate Modern art gallery, police said.

The Metropolitan Police said officers and paramedics found the injured child on a fifth-floor roof of the Tate. He was taken by air ambulance to a local hospital, where he was listed in critical condition, police reported in a statement.

“A 17-year-old male had remained with members of the public on the 10th floor viewing platform,” the statement said. “There is nothing to suggest that he is known to the victim.”

The outdoor viewing area and a rooftop bar sit atop the Tate Modern, which is Britain’s national gallery of international modern art. Visitors to the open terrace get free panoramic views of the British capital. 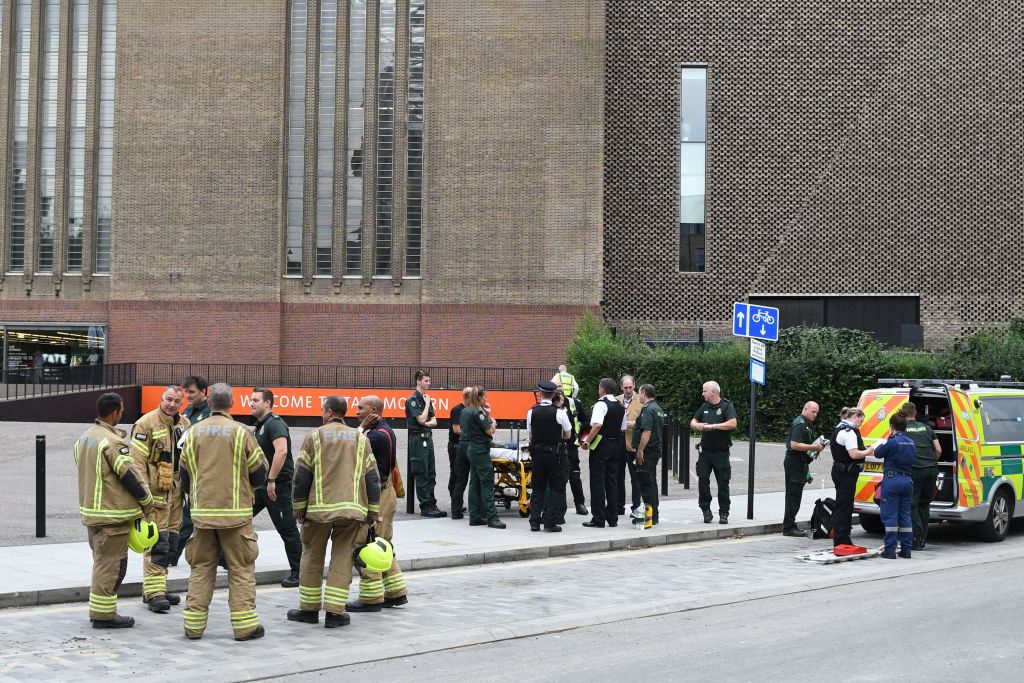 Police, ambulance crews and fire crews are seen outside the Tate Modern gallery in London on August 4, 2019 after it was put on lock down and evacuated after an incident involving a child falling from height and being airlifted to hospital. – London’s Tate Modern gallery was evacuated on Sunday after a child fell “from a height” and was airlifted to hospital. A teenager was arrested over the incident, police said, without giving any details of the child’s condition. (Photo by Daniel SORABJI / AFP) (Photo credit should read DANIEL SORABJI/AFP/Getty Images)

Officers were called to the gallery around 2:40 p.m. local time and were seen closing entrances as emergency services dealt with the incident.

“We did not notice the mum before, we noticed her after because she was hysterical by then,” Barnfield said.

The Tate later turned away visitors for the rest of the day.

A spokeswoman for the gallery said: “Tate is working closely with the police to help with their investigations.”

Located on the south side of the River Thames, the Tate was the U.K.’s most popular tourist attraction in 2018 with 5.9 million visits, according to the Association of Leading Visitor Attractions.

Highland Park Shooting Suspect Kicked Out of Synagogue Months Ago