“Never thought I would say this, but being put in a position to hurt my team because I don’t want to partake in the vaccine is making me question my future in the NFL,” the superstar wide receiver tweeted Thursday, in a since deleted tweet. The post was noted by Sports Illustrated.

Deandre Hopkins deleted a tweet Thursday that said the NFL’s vaccination policy made him “question” his future in the league: https://t.co/qEDjho8gap pic.twitter.com/VOmtlE28G4

He removed the post and his second tweet simply read, “Freedom?” (RELATED: REPORT: NFL Will Hold Teams Financially Responsible If Unvaccinated Players Cause A Game To Be Canceled)

In a third tweet, Hopkins tweeted to fellow NFL star Jalen Ramsey with the Los Angeles Rams one of the reasons he is hesitant to get the vaccine. He has since deleted it. But it was screenshot and is posted below. (RELATED: David Hookstead Is The True King In The North When It Comes To College Football) 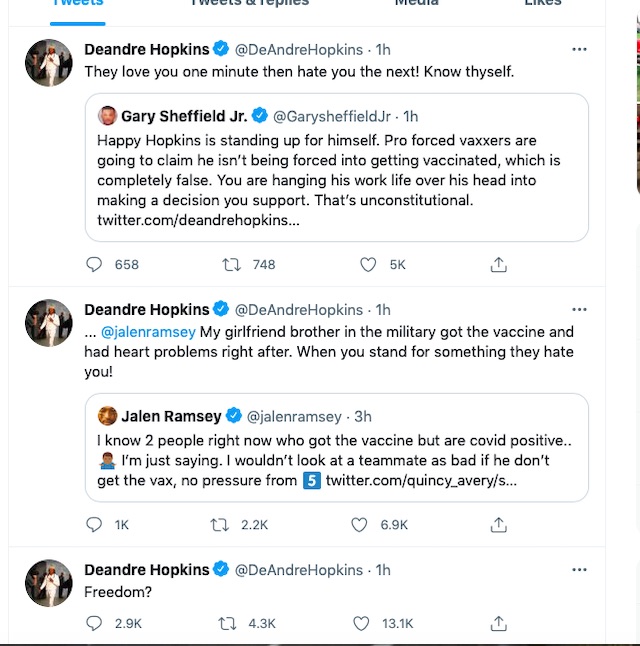 “My girlfriend[‘s] brother in the military got the vaccine and had heart problems right after,” Hopkins tweeted. “When you stand for something they hate you!”

His post was in reply to Ramsey’s who tweeted he knows “two people right now who got the vaccine but are COVID positive. I’m just saying. I wouldn’t look at a teammate as bad if he don’t get the vax, no pressure from [number 5].”

His comments come following the league’s release of a new coronavirus vaccine policy that holds teams financially responsible if unvaccinated players come down with COVID-19 and their game can’t be rescheduled during the 18-week season.

The NFL just informed clubs that if a game cannot be rescheduled during the 18-week season in 2021 due to a COVID outbreak among unvaccinated players, the team with the outbreak will FORFEIT and be credited with a loss for playoff seeding, per sources.