A massive outbreak of mumps is plaguing migrant detention centers across the U.S., according to a Centers for Disease Control and Prevention (CDC) report.

There have been 931 cases of mumps in 57 Customs and Border Protection detention facilities across 19 U.S. states from September 2018 to August 2019 , the report states. The disease has reportedly afflicted migrant detainees as well as facility staff.

“These detention centers are a perfect storm for mumps to spread. Individuals have to be within 3-6 feet of each other to spread this virus. Sneezing, coughing on someone, or sharing a drink can spread the virus.” Dr. Todd Ellerin, Director of Infectious Diseases and Vice Chair of Medicine at Southshore Health in Massachusetts, told ABC News.

Immunization is the most effective way to combat mumps, according to CDC, though CBP officials say they do not routinely offer the mumps vaccine to detainees, according to ABC.

“In general, due to the short-term nature of CBP holding and the complexities of operating vaccination programs, neither CBP nor its medical contractors administer vaccinations to those in our custody,” a CBP spokeswoman said.

Immigration and Customs Enforcement also says it does not routinely provide vaccination to detainees unless medically necessary.

“Flu and other common vaccinations are offered by request only and are not routinely mandated unless deemed medically necessary, in that doing so would prevent a wider outbreak,” an ICE spokesperson said in a statement, according to ABC.

Ellerin is a strong advocate for vaccination in detention centers.

“From a public health perspective, I feel strongly that the benefits of vaccinating detainees against the flu and mumps outweighs the risks,” he told ABC.

“It is important that the staff receive maximal vaccination to avoid spreading the virus to their families, children, and communities,” he added.

Mumps is a viral infection that can cause fever, body aches and swollen glands, according to ABC. It spreads through respiratory contact, and does so very efficiently in close contact spaces such as detention centers, according to the report. 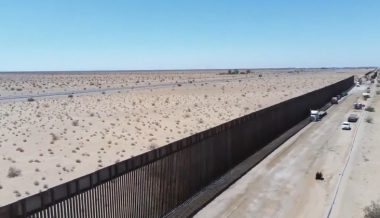