Chicago, Illinois was looted yet again by rioters under the guise of a Black Lives Matter “protest” after a police-involved shooting of a 20-year-old gangbanger.  A local reporter incorrectly claimed that the person shot by police was a 15-year-old innocent boy.  Maybe she confused the active gang member with an innocent black youth killed on the streets by an active gang banger.  Either way, the shooting was used as an excuse to loot over 200 stores in Downtown Chicago. 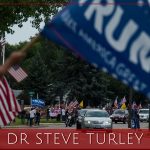