People across the free world who have lost jobs, Western companies that find themselves at the mercy of China’s authoritarian government, manufacturers and consumers nervous about critical supply chains running through China, and of course victims of the Wuhan coronavirus have much less reason to celebrate.

The Chinese Communist Party’s People’s Daily saw nothing but good flowing from Beijing’s acceptance into the WTO, portraying China as a model global trading partner:

During the latest trade policy review, China’s commerce minister Wang Wentao pointed out in his keynote speech that through untiring struggle and efforts as well as adherence to its reform and opening-up policy, China has achieved leapfrog economic development, providing huge opportunities for the world and making outstanding contributions to global economic development.

The commerce minister noted in his speech that over the past two decades since its entry into the WTO, China has strictly followed WTO rules, earnestly fulfilled its WTO commitments, and been a firm supporter of, active participant in, and important contributor to multilateral trading system. He also stressed that China has contributed to the global fight against the COVID-19 [Chinese coronavirus] pandemic with practical actions.

“A total of 65 representatives of WTO members spoke at the conference session of the eighth WTO trade policy review of China. And they made positive comments about China,” Wang Shouwen said.

Later in the article, the Communist newspaper claimed the entire world admires China’s Belt and Road Initiative (BRI) as a fountain of trade and development opportunities.

“This year marks the 20th anniversary of China’s accession to the WTO. If you look at the timetable for China’s WTO obligations, you can see that we have fully fulfilled our obligations under the WTO as well as our commitments to the organization. And several directors-general of the WTO and the vast majority of WTO members have given full affirmation and wide recognition to our performance in this regard,” Commerce Minister Wang Wentao said.

In truth, China’s membership in WTO has been marked by constant complaints about the Communist government’s unfair trade practices and predatory behavior.

The Australian government delivered a withering critique three weeks ago, accusing China of “undermining” the WTO. 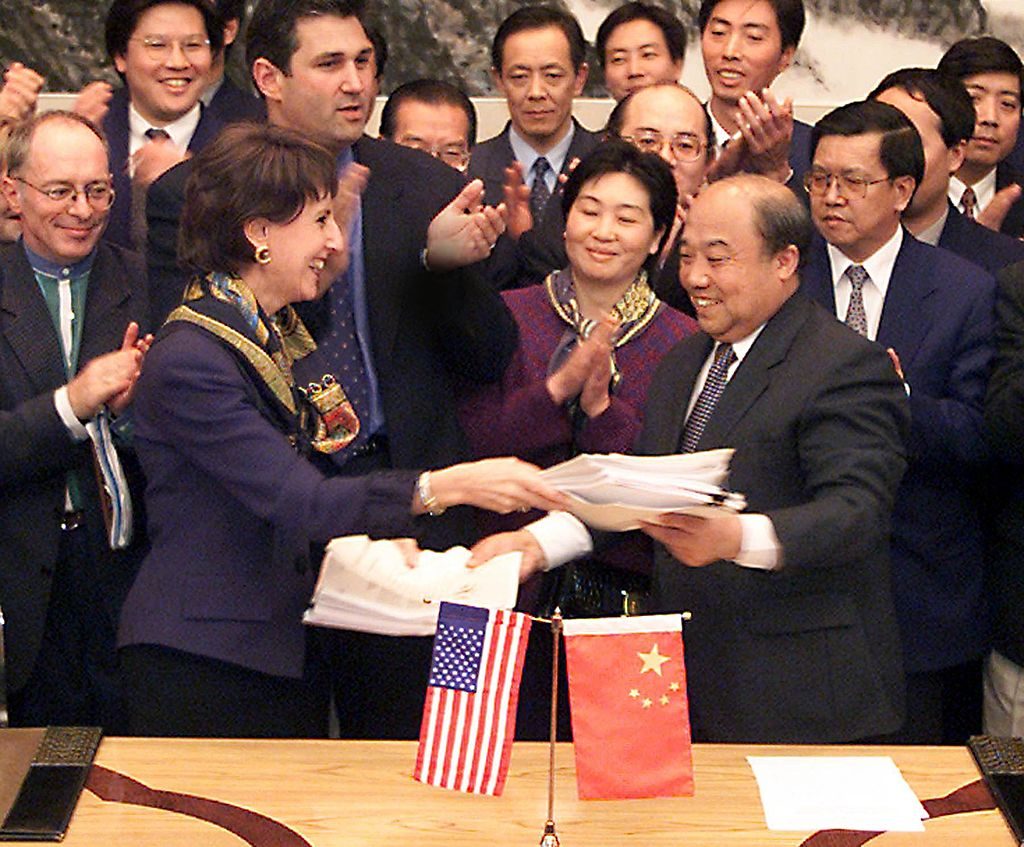 “China has increasingly tested global trade rules and norms by engaging in practices that are inconsistent with its WTO commitments,” Australia said, supporting the charge with a long list of goods China has restricted for purely political reasons, in defiance of WTO rules, solely because the Chinese regime is furious at Australia for insisting on a thorough investigation of the origins of the coronavirus pandemic.

The U.S. also strongly criticized China’s trade policies at the October WTO review, accusing it of such banned practices as preferential treatment for state-owned enterprises and inadequate enforcement of intellectual property rights.

“China has used the imprimatur of WTO membership to become the WTO’s largest trader, while doubling down on its state-led, non-market approach to trade, to the detriment of workers and businesses in the United States and other countries,” said U.S. charge d’affaires David Bisbee.

Bisbee observed that “expectations have not been realized” that China would be liberalized by WTO membership, as promised by those who supported its admission 20 years ago.

“We also cannot ignore reports of China’s use of forced labor in several sectors,” he added.

Contrary to Chinese state media’s fantasies of universal praise, almost every other WTO member was critical of China at the October review – and Bisbee pointed out that Beijing intimidated into silence those who held their tongues.

“If another WTO member speaks out against or otherwise offends China, China’s response increasingly has been to use its economic clout to pressure the offending country to ‘correct its mistakes,” he said. 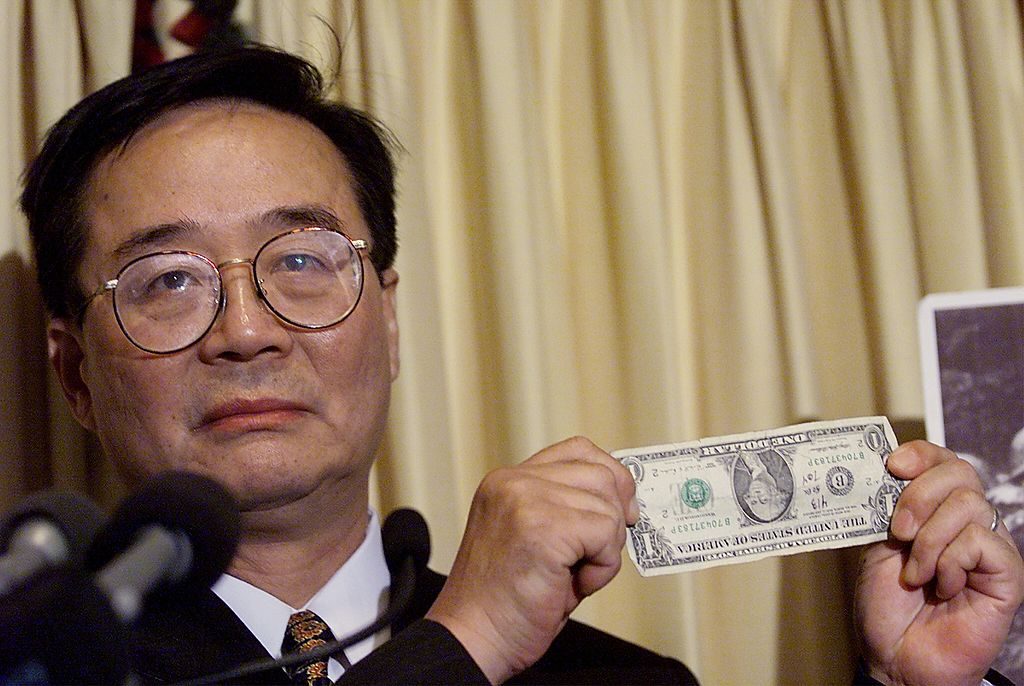 Harry Wu the democracy activist and former Chinese political prisoner joined a coalition of advocacy groups 18 November 1999 to announce opposition to the Clinton administration’s World Trade Organization agreement in Washington, DC. Wu holds up a dollar bill to show that the administration is only looking out for the money and not the people of China.(STEPHEN JAFFE/AFP via Getty Images)

China’s abuse of WTO membership is made amusingly obvious by its insistence on portraying itself as a “developing nation” to collect benefits, while simultaneously bragging that it is now the Number Two economic power in the world and will soon overtake the United States as Number One.

A report by the nonpartisan Economic Policy Institute (EPI) in January 2020 estimated 3.7 million American jobs have been lost due to our swelling trade deficit since China joined the WTO, with the manufacturing sector hit especially hard.

EPI unambiguously stated China’s entry into the WTO was a major factor in killing those American jobs since it allowed China to flood American markets with “dumped” goods and triggered a wave of offshoring jobs in manufacturing and technology. The authors also cited China’s currency manipulation as harmful to the U.S. economy.

“We’ve lost nearly five million manufacturing jobs in the last 20 years. At least half of these job losses are explained by the growth in the China trade deficit,” said EPI director of trade and manufacturing policy research Robert Scott.

Halfway through China’s 20 years of WTO membership, researchers at another nonprofit called the National Bureau of Economic Research noted the “surprisingly swift” decline of American manufacturing jobs and pointed out the effect was especially devastating on low-skilled workers. Those American manufacturers who did not give up entirely and close their factories decided the only way to compete with cheap Chinese labor involved trimming low-skilled positions to run with a smaller highly-skilled staff plus more machines. For those concerned with “income inequality,” there is little question that China’s entry into the WTO made the problem worse.

China used WTO membership as a vehicle to increase its economic clout across the free world, and then weaponized that clout into “sharp power.” The authoritarian communist regime now routinely uses its economic leverage to force American and European companies to comply with Chinese political directives, such as speech codes.

The dismal lesson of the past 20 years is that trade and “engagement” did not liberalize China, as the globalists promised. On the contrary, the free world is growing more authoritarian, adopting Chinese Communist theories about speech and information control with terrifying speed. China’s WTO membership is not solely responsible for this trend, but it certainly contributed to giving China the economic clout it needed to exert its malign influence on everything from Big Tech to American sports and entertainment.

WTO membership helped China take a commanding position in many of the Western world’s vital supply chains – including those with military and medical applications. During the coronavirus pandemic, China threatened to disrupt medical supply chains around the world if its role in unleashing Covid-19 was investigated too closely.

Shifting those supply chains out of China to protect them from political manipulation and restoring America’s manufacturing capacity will be incredibly difficult and expensive – something China’s Communist mandarins understood far better than the globalists who admitted them to the WTO.

Beijing is working hard to destroy the only way Western governments ever think to use their economic power to achieve ideological goals: punitive sanctions against regimes that violate human rights. Two decades after it joined the WTO, China is close to establishing a new world order in which tyrannical regimes can abuse their citizens as they please and do whatever it takes to stay in power, as long as they honor agreements that benefit China.

Even genocide and slavery are acceptable under the Chinese Communist Party’s notion of “world trade.” Globalists assured us in 2001 that Chinese tyranny would dissipate thanks to economic engagement, but today Americans have to check the supply chains of every product they buy to ensure it was not assembled or harvested with forced labor.

Implicit in China’s gloating about its 20 years of WTO membership is smug confidence that the global economy has been changed forever, and the meaning of terms like “free trade” and “multilateralism” is now dictated by Beijing far more than by Washington, London, or Brussels. The price of those cheap Chinese goods we were promised turned out to be agonizingly high. Few prominent representatives of either major American party are willing to hear the complaints of the American workers who paid it.

Supply Chain Problems Will Persist Because The System Is Being Sabotaged