Li held a video symposium from the southwestern province of Yunnan in which he told provincial officials to implement new policies to protect growth before the end of this month.

“Under the influence of new coronavirus outbreaks and changes in the international situation, among other unexpected factors, some economic indicators have weakened significantly since March, especially in April,” Li admitted.

“All localities and departments should step up their sense of urgency, and new measures that can be used should be used,” he instructed.

The Chinese government was singing a very different tune until Monday, when a fresh round of economic reports revealed a 2.9 percent drop in industrial production and a whopping 11.1 percent fall in retail sales during April. Unemployment rose to 6.1 percent, one of the highest levels since China began publishing monthly unemployment data in 2018.

Taken together, these reports described the most severe economic contraction in China since the Wuhan coronavirus pandemic began in 2020.

On Wednesday, global financial analysts shaved their growth forecasts for China by half a percentage point.

Li strove to avoid the impression he was hitting any panic buttons, advising governors to implement stabilization measures such as tax cuts and deferred interest payments on business loans. He pointedly avoided announcing any “stimulus” plans, perhaps leery of the runaway inflation affecting countries like the United States after trillions of dollars in pandemic spending.

Goldman Sachs analysts thought Li might be paving the way for stronger measures to come, such as bond sales and stimulus plans to boost big-ticket sales like automobiles.

“However, with only gradual resumption of production and business operations in Shanghai, increased uncertainties around Covid resurgence in other parts of the country (for example Tianjin reported rising new local Covid cases), and further deterioration of property indicators year-to-date, overall growth still faces a lot of downward pressures,” Goldman Sachs judged. 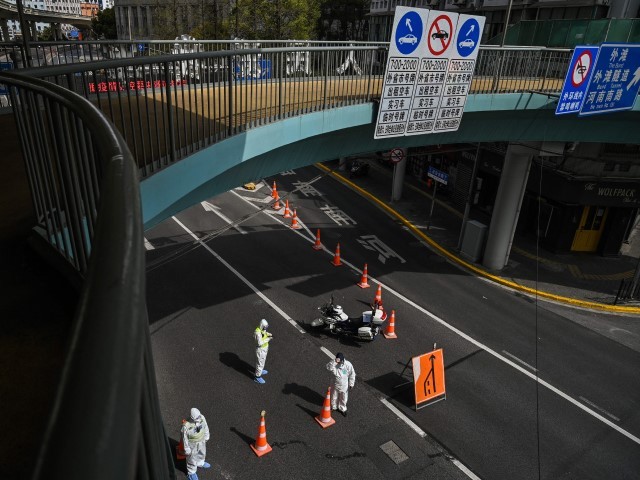 Transit officers, wearing protective gear, control access to a tunnel in the direction of Pudong district in lockdown as a measure against the Covid-19 coronavirus, in Shanghai on March 28, 2022. Millions of people in China’s financial hub were confined to their homes on March 28 as the eastern half of Shanghai went into lockdown to curb the nation’s biggest Covid outbreak. (HECTOR RETAMAL/AFP via Getty Images)

The Chinese real estate market is once again a topic of concern, thanks to the perpetually looming disaster of property giant China Evergrande.

Evergrande missed some important deadlines for issuing financial reports, raising fears of an impending collapse that could wipe out smaller companies and throw the real-estate market into chaos. On the other hand, if Evergrande remains intact by stiffing its creditors and fending off their lawsuits, perhaps with government assistance, a different sort of chain-reaction credit and property value collapse could be triggered.

Chinese entrepreneurs told Al Jazeera News on Tuesday that contrary to confident statements from Beijing, coronavirus lockdowns are crushing their businesses with everything from labor shortages to supply chain problems. Business owners complained about the uncertainty caused by lockdowns imposed without warning and maintained for weeks on end, terrorizing the public and causing foreign workers and investors to flee the country.

The Economist reported on Thursday that a growing number of Western analysts are describing China as “uninvestable” because lockdown uncertainty is adding to pressures like the slowing economy, the Chinese Communist Party’s unpredictable crackdowns on tech companies, and worsening diplomatic relations with the free world.

Joe Biden to Award Simone Biles the Medal of Freedom