Cindy McCain, wife of late Sen. John McCain, said that he would be “disgusted” by the actions of Republicans under President Donald Trump during a CNN interview that aired this weekend.

“Oh, gosh. I think he’d be disgusted with some of the stuff that’s going on. I really do,” McCain said.

“I think what he’d be saying was, is that he’d rail against what’s going on. And I think John provided a lot of cover for other members, and when he would do it, then they could get behind him kind of thing and I’m not seeing a real rudder in the Senate right now, in all this.” 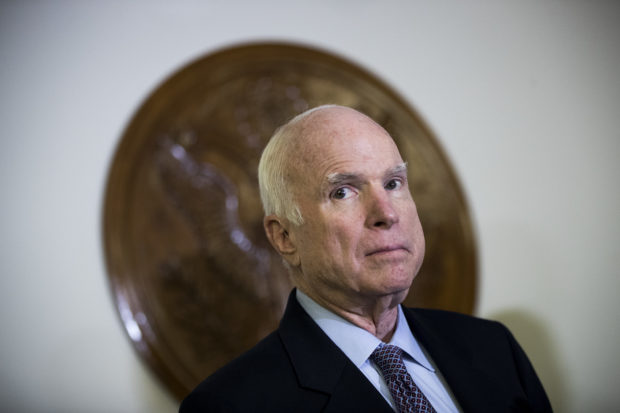 “Why do you think that is?” Axelrod asked. “It seems like there’s this sort of reign of terror about taking on the president, criticizing him.”

“Yeah. I think it has to do with reelections and–and keeping our heads down,” McCain responded. “And I’m not being critical because I understand what it means to get reelected, but at some point you have to–you have to do what you were elected to do and that is represent the country, as well as your local people.”

“But, I think John would be … I know he’d be terribly upset about this whole thing. He was upset before he died, when he saw what was going on. I just wish he were here, like all of us. I wish he were here. We need him more than ever. We really do.”

As senator, John McCain made a reputation for being a Republican maverick. Under Trump, McCain was a staunch critic of many things the president did. McCain passed away in August 2018. (RELATED: Trump Critics Use John McCain’s Funeral To Criticize The President — Here’s What They Said)

Even after McCain’s death, Trump has criticized him. Earlier this year, Trump said, “I was never a fan of John McCain and I never will be.”