Somewhere in this stunning image, strikingly reminiscent of science fiction scenes, lurks an enormous black hole, consuming huge quantities of mass from its surroundings. Can you find it? (Hint: look to the light.)

Black holes are incredibly dense with extreme gravity which sucks in matter at high speed, creating a bright disk of superheated gas and particles around it.

Their behavior also distorts their surroundings and magnetic fields, propelling some material away and back out into space, creating dramatic columns of light. So, follow the bright trail back up to the top left in the photo to find where the black hole is hiding.

The incredible image, snapped by Hubble almost 20 years ago, was recently shared on Twitter by the team behind the space telescope to mark NASA’s ‘black hole week.’ The snap is of a section from galaxy ‘M87’ and its impressive eponymous black hole, sitting some 50 million light-years from our planet.

M87 first began to draw attention from astronomers back in 1918, thanks to the strangely straight ray of light being projected through the galaxy. Scientists believe the enormous black hole has consumed material equivalent to 2 billion times our Sun’s mass.

The phenomenon was at the center of an incredible moment for science earlier this year when physicists released a new image of it as the first-ever photo of a black hole. 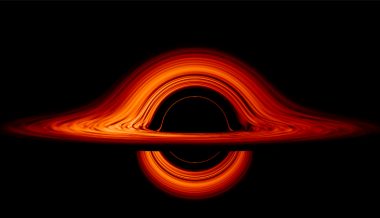