As is also widely anticipated, the Democrats appear to be getting ready to make total asses of themselves.

Last year, the confirmation hearings for (now) Justice Brett Kavanaugh inflamed and enraged many Republicans and conservatives. It brought Senator Lindsey Graham front and center as an outspoken Trump supporter (he was not one before the election at all). This hearing was so slanderous and false that Judge Kavanaugh himself was highly emotional in describing the torment the politicization of this event put his family through, alleging stories of sexual harassment that were absolutely fabricated.

But this time is different. President Trump pulled off a near-perfect pick. Let’s go down the list:

In other words, this lady is the American militant feminist or liberal Democrat’s utter nightmare. But she is more than that. She is likely in fact to be the rock upon which the hysterical screaming liberals smash themselves to bits on if they are not really careful.

However, every indication appears to be that the liberals are not going to be careful at all, but that they believe they will have a sympathetic audience in the American viewer of the upcoming confirmation hearings. Here is a sneak preview of what we might expect, based on what happened when she was confirmed as a DC District Judge:

In other words, the fact that you are a serious Christian, especially a Roman Catholic, is an affront to our highly protected right to murder unborn children. But that was in 2017. In more recent times, that right got extended by Governor Andrew Cuomo (D-NY) and was pressed for by Governor Ralph Northham (D-VA) to babies that are up to and after birth. Remember this?

We anticipate the attacks against Amy to be fierce and hysterical.

However, those attacks will founder badly if they try to play the racist card with Barrett, because not only does she have two black children, they are from Haiti, one of the poorest and most decrepit places on earth. Any race-baiting attack is likely to seriously backfire because of this.

The feminists will scream about the imminent danger to Roe v. Wade, and they might actually have a reason to do so. A solid 5-4 or even 6-3 majority of textualist / originalist justices might have a second look at Roe and decide to overturn their 1973 decision that effectively “legislated from the bench” the right to abortions in the United States.

However, such a ruling would not categorically make abortion illegal nationwide. This is extremely important to remember. What an overturning of the 1973 ruling would do is refer the matter of abortion back to legislatures, most likely at the state level. The problem is that abortion is increasingly unpopular in the United States, and it is unlikely that every state will legalize the procedure. In fact, there is even a good chance that no state aside from New York and maybe California, will legalize the procedure at all. It would be interesting to observe a Roe overturning’s effects on existing state statues that presently curtail or allow mid- and late-term abortions, as well as age of consent laws and so on.

All the same, if the confirmation hearings look to be positive for Judge Barrett (and they likely will be), expect legislation to arise in the US House of Representatives to legalize abortion by means of a constitutional amendment. This would be an irrational move, but we have an irrational group of Democrats in Congress so there is nothing sacred or off the table right now.

The feminists alternate line of attack is to go after Judge Barrett for not being feminist enough in some way, presumably because she listens to her husband and has seven children. Sarah Palin underwent such an assault from feminists, and I heard her being called some of the most foul langauge any person can use for a woman in English. This was particularly manifest because Governor Palin is a beautiful woman (a former beauty queen) and the same goes for Judge Barrett. She is a very attractive, even beautiful, successful family woman. That will make the feminist liberals writhe in agony, and they will be sure to be heard expressing their outrage in some way. 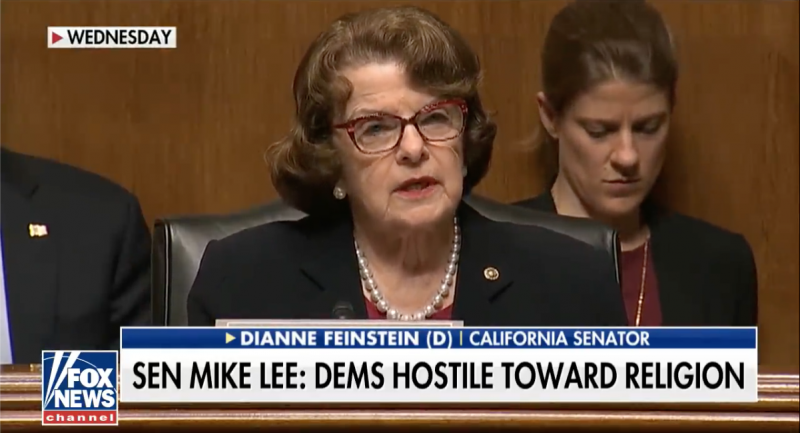 a great saying for such women, whom he calls “feminizis”: Feminism was established as to allow unattractive women easier access to the mainstream of society.

All this being said, there really is only one line of attack possible for Democrats to try. It is to attack Judge Barrett’s adherence to the teachings of the Roman Catholic Church.

Now, many people who are Protestant or Eastern Orthodox have plenty of exceptions to take with the errors of the Roman Church. This is not without reason. But the Roman Catholic faithful who obey their Church do well to obey it when they do so for the sake of the Lord, just the same as any of us. Joe Biden and Nancy Pelosi are not interested in following the Church teachings at all. They treat the Roman Catholic religion as a sort of “cultural trapping” and live within it but totally disregard its harder teachings.

It is in fact an infantile argument to try to take any of the theological errors of the Roman Church as basis to say that they are not Christians. This is nonsense. The Orthodox Church has the deepest schism with Rome and yet they do not define the Roman Church as being in heresy, but rather, only in schism. And Judge Barrett does what she does in good faith, believing she is doing what is right in the eyes of God and trusting what her Church says.

Since the Roman Catholic Church is very large, institutional and powerful in a secular sense, the Democrats will see this as reason to sow “distrust.” However, that notably failed in the year of 1960 when John F. Kennedy spoke directly to the opposition to his running for President, which at that time was not about Catholic adherence to the commandments of Christ, but rather about following the Vatican’s wishes instead of the nation’s. A bit more culture to the argument than today’s offerings, but still absolutely just as paranoid, hysterical and stupid.

What we may get to see is a Democrat hair-on-fire display. And here is the really honestly funny piece about all of this: If the Democrats have any hope of winning the Presidential elections, it will be because they behave in a dignified manner about the confirmation hearings, with only policy-related questions and legal experience. They are cornered by the huge walls that Amy Coney Barrett brings to the process: Woman, mother to seven children, two with black skin; excellent legal reputation, straight life, and not a feminist.

This should be great fun. Game on.

I Am One Of The First People In Washington D.C. History To Place A Legal Sports Bet At A Bar