It all began with a man who held up a sign asking for beer money.

Carson King, 24, was seen at an Iowa State University football game earlier this month holding a humorous sign that read, “Busch Light Supply Needs Replenished,” along with the address to his Venmo digital wallet.

Carson King was joking when he held up a sign asking for beer money during a college football pre-game show. When cash started flowing into his Venmo account, the 24-year-old decided to donate it to a children’s hospital.@kevtibs has the story. pic.twitter.com/cOuO0LcgDo

King’s sign went viral. He soon raised hundreds, at which point he decided to donate the money (minus a case of beer) to a children’s charity.

“As word spread of his plans to donate the money, more people decided to contribute. Busch Beer and Venmo even caught wind of his plans, and raised the stakes by pledging to match his contribution,” CNN reported.

Busch even put Carson’s face and name on a can, dubbing him an “Iowa legend.”

Is it just me or is this can extremely good looking? I can’t be more humbled that @BuschBeer and @venmo are matching our contribution. We’re closing in on A Million for @UIchildrens #ForTheKids pic.twitter.com/Wuzil9Y1Qb

At this point, The Register decided to do a profile on King, during which reporter Aaron Calvin stumbled on some of King’s old social media posts which he brought to the attention of Register staff.

“Calvin found two racist jokes that King had posted on Twitter in 2012,” the newspaper explained in a statement from executive editor Carol Hunter Tuesday. “Calvin asked about them, and [King] expressed deep regret.”

A statement from our editor: pic.twitter.com/ZH9AhcrYbg

Register staff mulled over whether to include King’s social media history in the profile, which they ultimately agreed was the right thing to do.

“Eventually, Register editors decided we would include the information, but at the bottom of the story. We thought we should be transparent about what we had found, but not highlight it at the top of the story or as a separate story. It was planned as a few paragraphs toward the bottom of the profile.”

But before they could put the story out, King beat them to the punch, announcing at a press conference attended by local media that he was regretful of his tweets.

In light of the tweets, Busch cut ties with King, but said it would honor its commitment to donate to the charity.

The Register’s profile was published Tuesday and included short paragraphs about the “racist tweets” from 5 years ago. 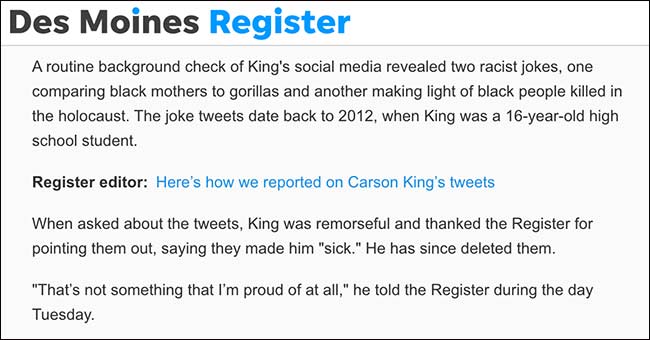 After publication, readers began investigating the article’s author Aaron Calvin, whose own social media history also evidently contained problematic social media posts, leading to blowback against the newspaper they likely did not foresee.

Twitter users quickly found tweets which could be deemed racist or homophobic by any politically correct liberal standard, and demanded the same level of transparency by the newspaper for Calvin.

So let us know when you’ll be featuring your reporter’s old tweets. You know…for the public good and all.

He’s deleting them now, but don’t worry, we’ve screen-grabbed the most racist and homophobic… 100 or so of them.

What about your own use of the n-word, homophobia, and some weird thing about sex and high school students? pic.twitter.com/IpgyFcAow5

Your reporter is mass deleting tweets of homophobia, racism, and more! pic.twitter.com/ZlvMeb0Fps

How can anyone trust the DM Register when their reporters hate the police? pic.twitter.com/bsu4mMMH0B

“The Register is aware of reports of inappropriate social media posts by one our staffers, and an investigation has begun,” the publication tweeted out in response.

The Register is aware of reports of inappropriate social media posts by one of our staffers, and an investigation has begun.

The entire sordid affair is emblematic of how the politically correct cancel culture can blow up in SJW’s faces and come back to haunt them.