The Department of Homeland Security chief commended President Donald Trump for addressing the need for border security during his United Nations speech and explained how the administration is ending “catch and release.”

Acting Homeland Security Secretary Kevin McAleenan reacted during an appearance on “Fox & Friends” Wednesday to the president’s Tuesday U.N. speech and said the combination of an asylum agreement with Mexico and repatriation deals with other Latin American governments is bringing an end to the biggest incentive for illegal migrants.

“If you don’t have integrity in the system, if you can’t effectuate immigration results as people arrive at the border, and they’re invited to come up with promise they will be released in the next country, they are going to keep coming. So what we’re doing now is working with international partners to change that dynamic,” McAleenan said Wednesday morning.

The numbers have dipped in recent months, however, the U.S. government is trying to manage the high levels of illegal immigration taking place at the southern border, most of them family units from the Northern Triangle. For example, Border Patrol and other Customs and Border Protection officials saw almost 100,000 families cross the U.S.-Mexico border in May.

Westerners are being misled on the world’s biggest pollution culprits.

“We have changed that dynamic. Working with Mexico, not only to reduce the flow, but with the Migrant Protection Protocols, we now have families waiting in Mexico for expedited court proceedings instead of being released in United States. Additionally, we’ve partnered with El Salvador, with Guatemala, and now Honduras on streamlined repatriation,” the DHS chief said.

“If people don’t have a valid asylum claim, if they don’t even make a claim, we can repatriate swiftly directly from the border. That’s how we’ve changed the dynamic,” he continued.

Migrant Protection Protocols, also known as Remain in Mexico, keeps asylum seekers in Mexico as they wait for their cases to be adjudicated in the U.S. immigration court system. The Mexican government is holding thousands of migrants as they wait out their asylum claims, which eliminates the possibility for them to be released into the interior of the U.S.

The Trump administration has reached a safe third country agreement with Guatemala, which calls on its government to allow asylum seekers from other countries to seek protected status there instead of in the U.S. McAleenan also inked a similar deal with El Salvador earlier in September.

More negotiations look to be on the horizon. McAleenan will be meeting with El Salvador President Nayib Bukele later Wednesday to discuss immigration and other security matters.

Shocking Before And After Images After Trump Supporters Clean Streets Of L.A.

Nancy Pelosi continues to criticize President Trump while the district she represents falls apart due to Democrat policies. 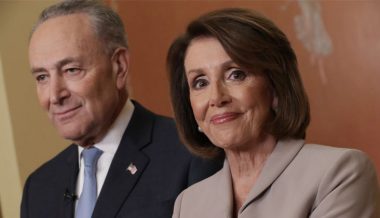 GOP Rep. Gonzales: We’ll See Repeats of ‘What We Saw in Del Rio’ Unless Action Taken, Biden Must Be Held Accountable on Remain in...