The Department of Homeland Security (DHS) has released data showing sharp drops in legal migration from several unstable countries during 2018.

The migration decline is described in the new “Yearbook of Immigration Statistics 2018,” but the yearbook does not explain why the award of green cards to legal migrants has declined. The yearbook also excludes data from 2019.

President Donald Trump’s 2017 and 2018 cuts to refugee inflows and his focus on airline security helped to reduce the arrival of legal, green card migrants from the so-called “travel ban” countries, Forbes reported. For example, the inflow of legal immigrants from the five “travel ban” Muslim countries dropped from 28,743 to 10,148. That is a 65 percent drop for the group, which includes Syria, Somalia, Iran, Yemen, and Libya. 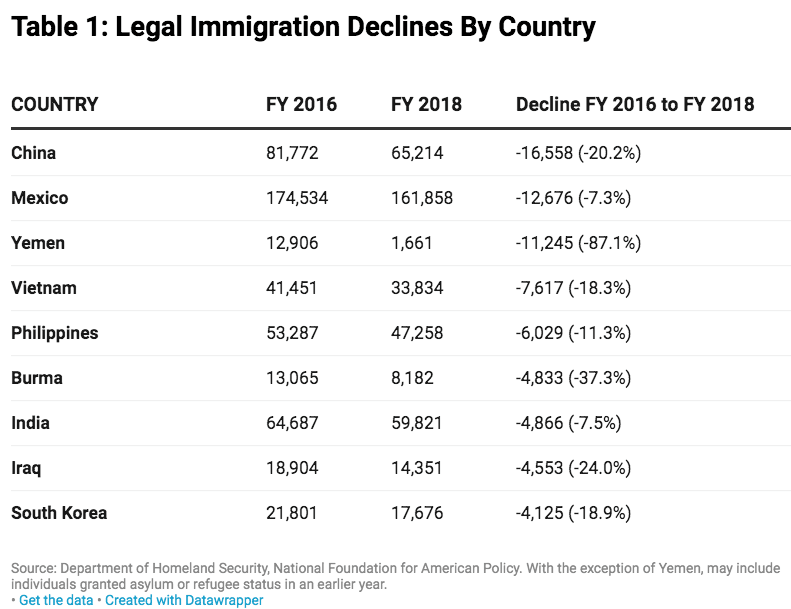 However, without cooperation from Congress, there is little that Trump can do to force down the overall level of immigration, said Jessica Vaughan, the policy director at the Center for Immigration Studies.

“That is a slowdown rather than a shutdown,” she said, adding that most of the 2018 green card reductions may be recovered once the immigration agencies speed up their process in a nation of 325 million people.

“Very little can actually change from year to year because [Congress allows] an unlimited number of immediate relatives [spouses, minor children and parents], and the family; employment and [diversity] lottery numbers are fixed by law,” she said.

The reduced number of “refugees means 122,412 fewer legal immigrants became lawful permanent residents in FY 2018 than in FY 2016, a decline of 11.5%,” Stuart Anderson wrote in the Forbes article.

The overall numbers were likely held down by tighter and longer scrutiny of would-be migrants, Anderson wrote:

At U.S. consulates, determinations of visa ineligibility based on 221(g) grounds increased for individuals applying for immigrant visas from 254,478 in FY 2017 to 341,128 in FY 2018, a rise of 34% or 86,650. 221(g) is a type of catch-all denial used by consular officers and defined as when an “Application does not comply with provisions of the INA [Immigration and Nationality Act] or regulations issued pursuant thereto.”

“Even if more people are rejected, there are many other people in the queue behind them,” Vaughan countered. When a potential migrant is denied a green card, then officials simply start processing the next migrant in line, she said.

Business groups support nearly all forms of immigration because the inflow of workers, consumers, and renters provides a huge stimulus to investors and companies. For example, in January, numerous companies and trade associations asked a judge to block a new regulation that would reduce the inflow of unskilled, poor, or unhealthy legal migrants:

If admitted to the United States and allowed to remain as permanent residents, those individuals [who may be excluded] would pay taxes, contribute the value of their labor to the workforce, and purchase goods and services from American businesses—thereby boosting economic growth.

The magnitude of this effect is enormous: One study calculates that “for every 1 percent increase in [the] U.S. population made of immigrants, GDP rises 1.15 percent.”

The government’s report covers Fiscal Year 2018, which started on October 1, 2017, and ended the day before October 1, 2018. But the year’s data was released in early January 2020 because DHS is very slow to release data.

The agency also hides much data, such as the resident population of H-1B and L-1 visa workers, and obscures other data, such as the number of work permits given to foreigners. DHS “continues to crank out work permits in numbers that can’t help but have an effect on the labor market,” said Vaughan. “That represents a shadow [legal] immigration program that nobody voted for — and there’s is very little public understanding or oversight.”

Biden Dismisses Question on Whether Vaccine Goal Is Improvement: ‘Come on, Give Me a Break’