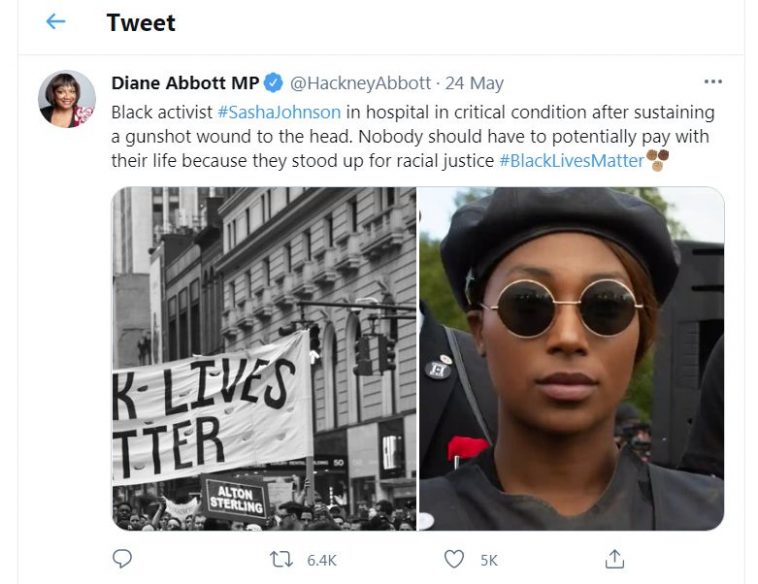 Although she is mocked widely, the Labour MP Diane Abbott isn’t an unintelligent woman. Unfortunately, like many people across a broad political spectrum and none, her mouth moves faster than her brain, which results in her making claims that are simply untrue, usually before all the facts are in.

The Conservative radio host Dan Bongino has found a cure for this; modestly called the Bongino rule, it is simply to wait – usually for up to 72 hours – before making any judgments. He came up with this rule to deal specifically with the avalanche of lies thrown at Donald Trump and his supporters by the mainstream media, the Deep State, and many other players.

The Bongino rule isn’t a bad one to adopt for everyday life because innocent acts can be interpreted as sinister even when there is no ill intent, for example, a man dragging a protesting young girl along the street might be a kidnapper, or he might be an impatient father taking his petulant daughter home.

Last week, a young black woman named Sasha Johnson was shot in the head at an address in Peckham, South London. Miss Johnson is an active supporter of Black Lives Matter, and has been known to make inflammatory speeches based on her wilful ignorance of history. On May 28, the South London Press reported her shooting on its front page as Equal rights activist shot in the head; equal rights indeed. Four days earlier, Miss Abbott commented on Twitter: “Nobody should have to potentially pay for their life because they stood up for racial justice #BlackLivesMatter”.

Any Londoner with a gramme of nous could have told her this shooting almost certainly had nothing to do with Black Lives Matter and even less to do with racial justice, whatever that means. And sure enough, an 18 year old boy named Cameron Deriggs (referred to by the Guardian as a man) has now been charged with attempted murder; four alleged co-conspirators have been bailed until next month. They were said to have entered the back garden of the house in Consort Road where around thirty people had been partying at 3am, a time when all good white supremacists have returned home from their cross burnings. All the alleged attackers were said to have been wearing dark clothing, and are believed to have equally dark complexions.

Not only that, Miss Johnson wasn’t believed to have been the target. This “gangsta culture” is endemic with urban blacks of a certain type in the UK. Hopefully, she will make a full recovery, and reconsider her views about not only “Imperialism” which brought the White Man’s medicine to Africa thereby saving countless lives as well as hers, but about “racist” stop and search laws. As for Miss Abbott, sadly there is no hope for her.