Garland announced Monday he was directing the FBI to “use its authority” against parents who threaten or harass public school officials. In the letter, first obtained by the Daily Caller, Bishop and his colleagues say they are “not aware” of any widespread violence or threats toward education officials and accuse the DOJ of targeting political opponents who are expressing dissent.

“The purported factual predicate for this order was ‘a disturbing spike in harassment, intimidation, and threats of violence’ directed against such persons ‘[i]n recent months,’” the letter reads. “Although we have observed throughout this year a growing movement of parents speaking and protesting in local school board meetings against racist Critical Race Theory-based (CRT) indoctrination and specious mask mandates for students, we are not aware of any significant or widespread acts or threats of violence or property damage associated with this First Amendment-protected activity, and certainly no apparent federal crime.”

“Your memorandum furnishes no detail of any occurrences that justify directing federal law enforcement to coordinate nationwide opposition to this political movement,” the letter continues. “Nor can such support be found in the National School Boards Association’s September 29 letter to President Biden demanding a federal law enforcement response, which you dutifully provided in three business days.”

Republicans were quick to push back on Garland’s directive, with many accusing the Biden DOJ of attempting to silence political dissent. Widespread protests and other forms of pushback have taken place in recent months across the country, as some parents have grown frustrated with the prevalence of CRT in school curricula and COVID-19 restrictions in the classroom. (RELATED: Republicans Pepper Deputy AG With Questions About Treating American Parents As Domestic Terrorists)

“Attorney General Garland is trying to brand American parents speaking up against Critical Race Theory as ‘domestic terrorists.’ Yet nothing in his memorandum even remotely justifies targeting American parents for opposing CRT and mask mandates in schools,” Bishop told the Daily Caller. “Garland has a lot to answer for here, as he failed to show any evidence that there’s widespread violent threats against school board members or employees by these moms and dads just looking to protect their children.”

“The Biden Administration is simply using the FBI to silence its political opponents. It’s a disgraceful abuse of government power. This kind of behavior may be normalized in Communist China and Russia, but it should never be seen in America,” he added. 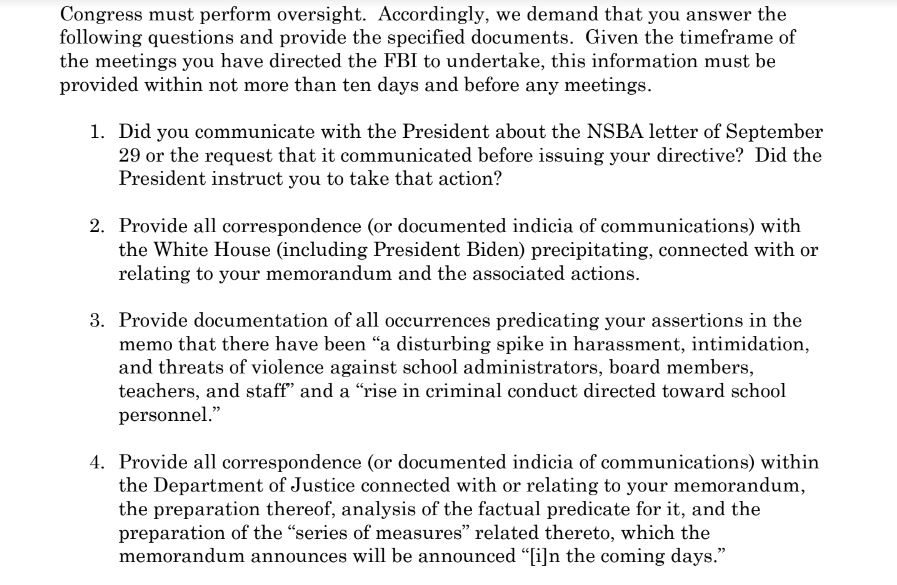 The letter demands answers to multiple questions from Garland, including whether or not the attorney general spoke with President Joe Biden about the NSBA letter or his ensuing directive. The lawmakers also ask for any correspondence with the White House about Garland’s memo and documentation of the alleged occurrences of threats and violence against education officials.