CHARLOTTESVILLE, Virginia — Former Vice President Mike Pence spoke about the importance of an active conservative movement in America’s education systems, telling Breitbart News, “One of the most important battlefields for the future is on the campuses of our colleges and universities.”

Breitbart News sat down with Pence in Pavilion IV on the Lawn at the University of Virginia, part of Thomas Jefferson’s historic Academical Village, which he designed to be the physical representation of the “intellectual frontiers that lay open to discovery” — an apt location given the topics he was set to address later in the evening to an auditorium packed with students.

Pence was optimistic about the future of education in America, as more and more conservatives are getting involved and changing institutions to be more liberty-centric after decades of leftist control.

Leftists attempted to force the school’s administration to ban Pence from speaking, but some administrators and faculty at the university stood up for the First Amendment.

“I was not surprised by the initial opposition to me coming here,” Pence told Breitbart News. “But I was pleasantly surprised by the willingness of the administration and prominent members of the faculty to stand up for freedom of speech.”

When asked what he thought the left was afraid of in hearing his point of view, he said that college campuses had been largely ideologically monolithic for decades, and intellectual confrontation — once the cornerstone of a college education — was an affront to the status quo.

“Anyone that has looked to higher education in the last 40 years has seen the increasing dominance of left-wing politics, whether it be Marxist economics or socialist policies,” he said. “They’ve really dominated on the college campuses and really become the central guiding philosophy on many campuses.”

“I think conservatives being willing to take our case to the campuses and challenge that liberal orthodoxy is very threatening to some who are not used to being challenged, because the truth of the matter is they’re out of practice defending their agenda,” he continued.

Prior to speaking with Pence, Breitbart News received an email from a Virginia father whose daughter is a high school senior who wants to attend UVA.

The father was concerned by the controversy surrounding Pence’s visit and said that free expression is “something very meaningful to me and my family.”

“Our family is potentially looking at a significant financial investment, where we’re going to have to sacrifice, to send her to a place where she’s going to feel stifled and restricted from expressing her viewpoints,” he continued.

When asked how he would respond to the father, Pence said, “I would say to that father that I think freedom is winning on campuses around America.”

Pence said the fact that he is speaking at UVA is proof-positive of this, and brought up another recent controversy surrounding his ability to speak at Stanford University.

“I spoke at Stanford recently, and the Young America’s Foundation group at Stanford had to appeal three and four different times to get the student senate to approve my opportunity to speak on campus, and we had protesters both inside and outside,” he explained, saying there could just as easily be protesters at his speech to UVA that was only hours away.

Active and involved conservatives are not just required for the future of colleges and universities, Pence said, but for K–12 schools as well.

School choice is paramount to fixing America’s education system, he explained, pointing to the nationwide, grassroots parents movement to reform school boards, remove their members, and elect new ones as a response to the indoctrination taking place in their children’s schools. 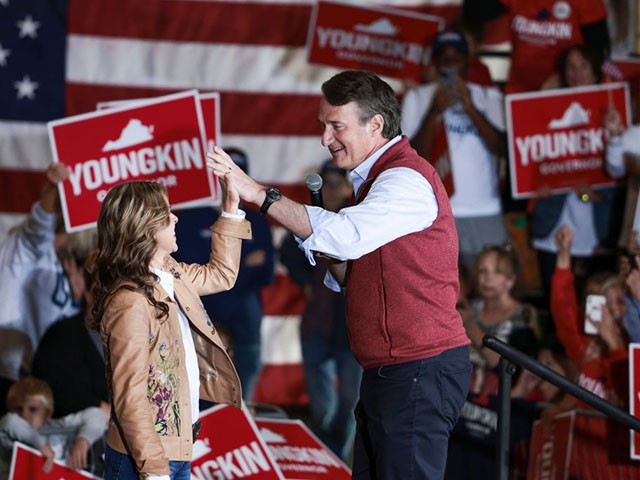 “But I think what you saw in Glenn Youngkin’s election here in Virginia — which you’ve seen in school board elections around the country in the last year and I think you’ll continue to see — is that is that parents are embracing an agenda of education freedom, and in a very real sense taking back our schools and taking back ownership of our schools,” Pence added.

Pence said the stage has been set for significant changes in education, which is largely an unintended result of the coronavirus pandemic and its heavy restrictions on children.

Parents started to take notice of what their children were really learning at school because many of them were required to attend class on a computer, Pence said, “and they weren’t happy about it.”

The issues that made headlines out of Loudoun County, Virginia, were the issues that defined this new national movement for conservatives, which “turned out a Democrat administration and elected Governor Glenn Youngkin.”

But the issue does not stop at the borders of the Old Dominion.

Parents around the country witnessed “heavy pressure from the teachers’ unions” to force school closures “while many private schools around America opened up and so many parents were asking the question why they couldn’t choose to send their children to the private, Christian, parochial school down the street that was open as opposed to having them study at home at the kitchen table.”

That is why it is important for conservatives to empower “parents to take back our schools and choose where their children go to school, and to recognize the importance of parental rights.”

Pence said he believes that right now is a historical “moment for education freedom and school choice as never before.”