First, a retraction: One of my previous posts noted in the cover art and elsewhere that Facebook stopped banning people posting the idea that COVID-19 originated in a lab. This was not true, though Fox News thought it was.

Facebook has instead doubled down on its efforts to prevent people from thinking for themselves. That is what we are going to show you here.

This may be a surprise considering videos and pieces like my own indicated that the media giant was loosening its grip. News people all over the world picked this idea up, like this one:

But this is not true. In fact, the opposite is taking place. I know. I am going to present you my own experience with this, first hand.

“A picture is worth a thousand words.” A lot of folks do not read my pieces (or many other people’s news pieces) all the way through because they are long.

But will they look at all the photos I am posting? This will save a lot of words, even though the photos are of… Facebook’s own words.

First, a bit of explanation.

Anyone who uses Facebook ought to be able to find these groups easily, and, welcome! They are full of excellent content.

Now, Facebook itself has not just one course of action for censoring content. To date, I have now experienced three different efforts, and other people have told me still more ways it happens to them.

The first was the complete and unexplained deletion of a different account I ran on Facebook. That happened in November, 2019. Facebook removed the account, giving a space for an “Appeal” that of course, garnered no answer. Thankfully, I had a backup account “Plamka Felixdomesticus” that I was able to continue tormenting Mark Zuckerberg with.

The second effort was what I call “Facebook Jail”, for posting news pieces like this one across many groups that I do NOT administer. When I do too many at one time, it restricts my ability to post, usually for one week, under the pretext of spammy content. The vague allegation “you have violated our Community Standards” usually comes with this, but never a specific explanation of how I did that, and no opportunity for real discussion or appeal. In fact, I am currently under such a restriction.

The group “I will not kneel to the Left” is now the new recipient of FB nonsense. Let me show you what I was told:

The first image is a full spread of the site so the reader can understand and verify that this is, indeed, Facebook. 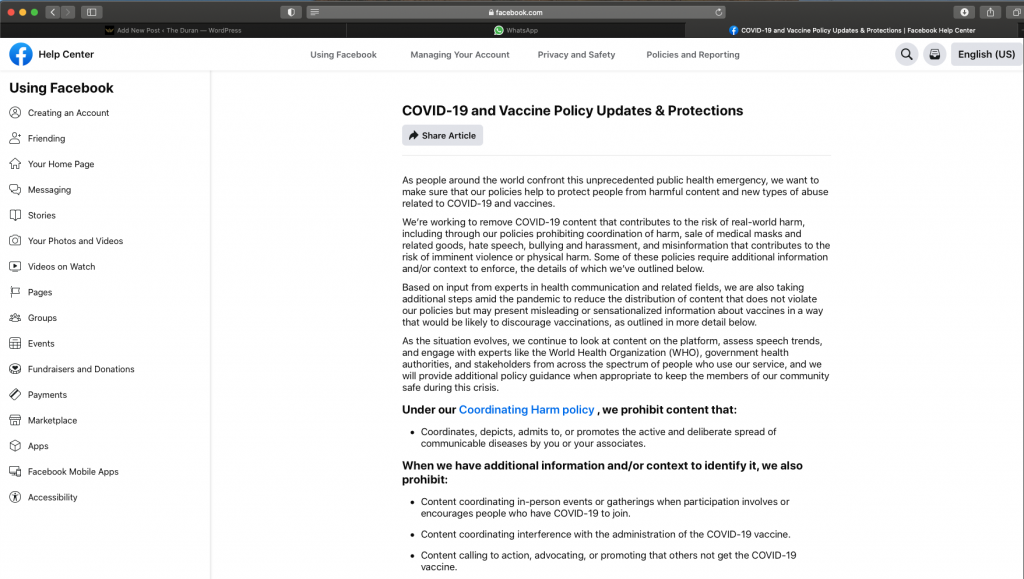 Notice at the bottom of this image, that Facebook prohibits anything promoting that people do NOT get the COVID-19 vaccine.

No, no, no… I am not saying that YOU all should not get it. What anyone else does with regard to the vaccine is none of my business. The fact that the vaccines have killed people is its own story, likely simply the result of a great rush to distribution and not enough testing. I would only advocate getting this information out freely so people can choose as informed men and women.

It appears that Facebook does NOT want you to think; it wants you to COMPLY. That gives me pause, as I think it is certainly not the province of nameless people and corporations to tell any individual what they must do.

You choose as you see fit for yourself and your loved ones. But I AM and WILL CONTINUE to say that I will not get it, nor will I be coerced into getting it by anything or anyone other than my God. I have better reasons than fear of death by vaccine, too. For those, you should read my other pieces, but I can summarize it in four or five words:

Simple? I thought so, too.

The remaining images will be only of the text of this policy page. However, this link should be sufficient to get anyone to the page who wants to see it for themselves. This is clearly a Section 230 matter, so we would do well to bombard our elected representatives with this news piece and screen grabs. Here we go:

This is very long, so just as reference before the shots, let’s point out some specific stances Facebook is taking, based on their own words shown below:

There are many other points, too.

Just one more thought from me, and I will let you go to the screenshots:

I think it is terrible to mock anyone for what they believe or don’t believe. I have friends and students who really believe the regulations we got were helpful, that masking is helpful, and they are vaccinated and say they feel good about it. I still talk to them, I still spend time with them just as much as I would have before, and I do not tease or berate them for what they think or do. If they ask me, I will speak my disagreement and what I believe and think. No one needs to be put down for any reason. We ALL need to be prayed for, because behind all this is one real truth:

No one really knows for sure. Not you, not me, no one. The biggest problem is that no one has made THIS statement the central issue.

I am no fan of tinfoil hattery. My life experience in technological fields, for example, has me knowing enough about 5G and other wireless technologies to say that the only threat about 5G was that Huawei perfected it first. In other words, economics and politics. I make it a personal point never to spread conspiracy theories, and in my reporting on them, I have often been very open with my own skepticism.

However, Facebook, in making itself the arbiter of what is “Acceptable” in terms of points of view expressed on their platform, is acting as a very powerful censor, or at the least, an editor, of a network in which people always used to be able to say whatever they wanted about whatever they wanted.

To aggregate such power and to attempt to cause literally billions of people to toe the line along a restricted and arbitrary set of viewpoints is wrong. Facebook has completely gone out of line in trying to regulate free exchange of thought and opinions, and as you will see, not only on COVID-19, but on a wide range of other topics.

This should be stopped, and the sooner the better.

That is enough from me. Enjoy the exhibition of Corporate-Sponsored Propaganda. The Future is Now. 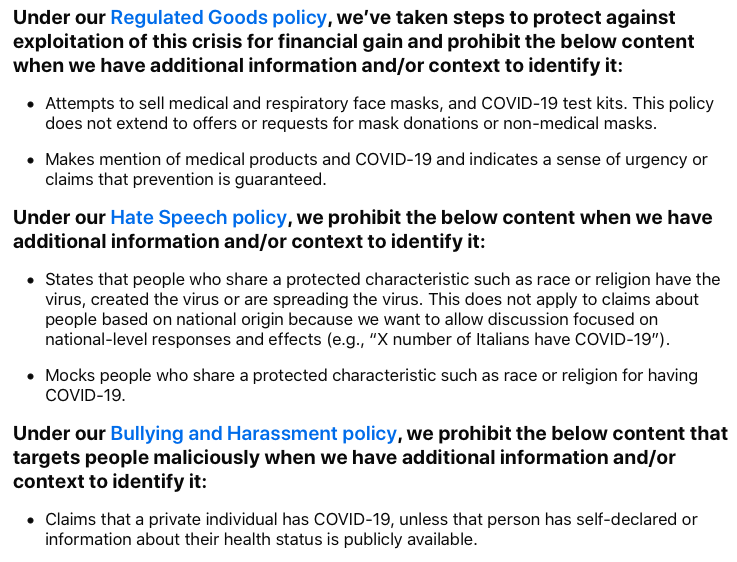 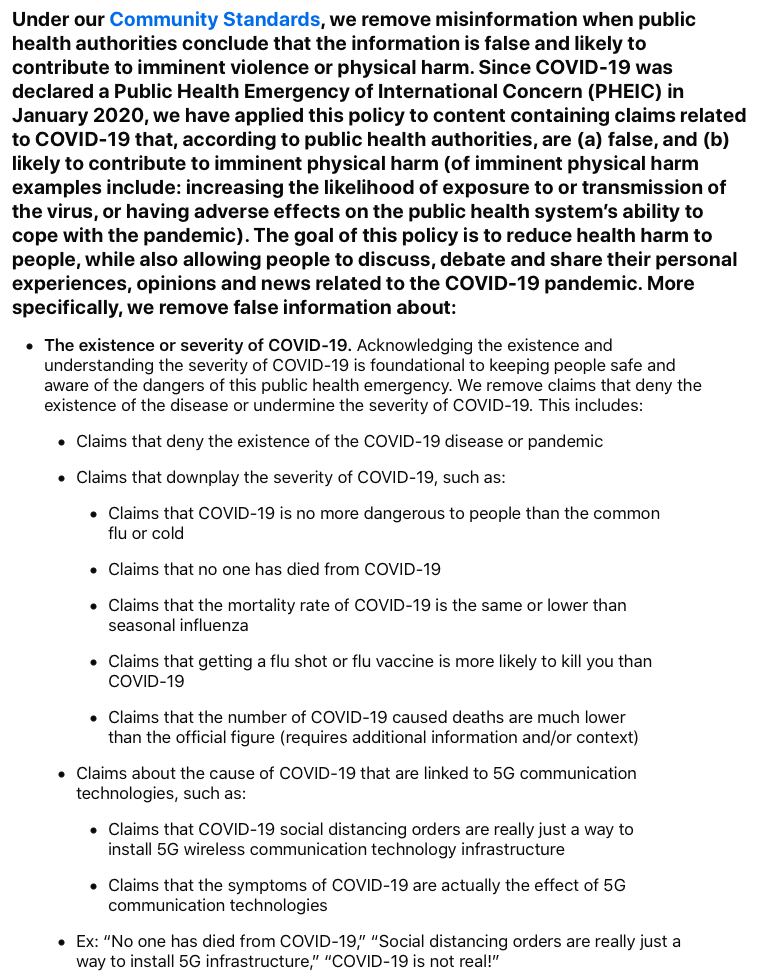 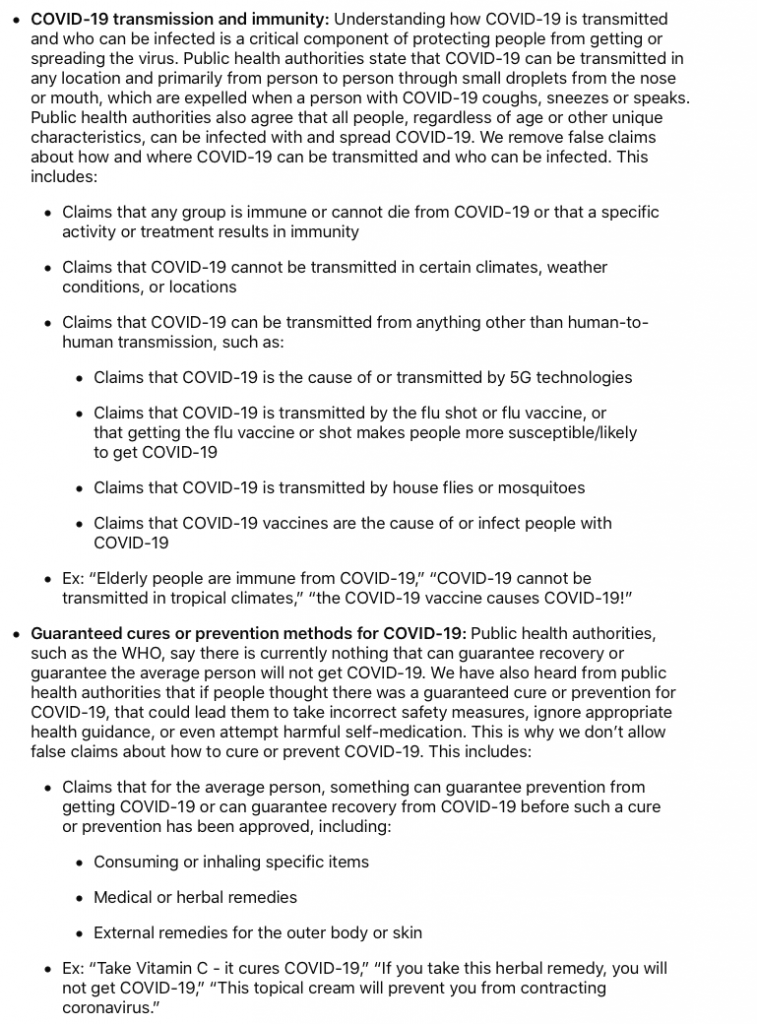 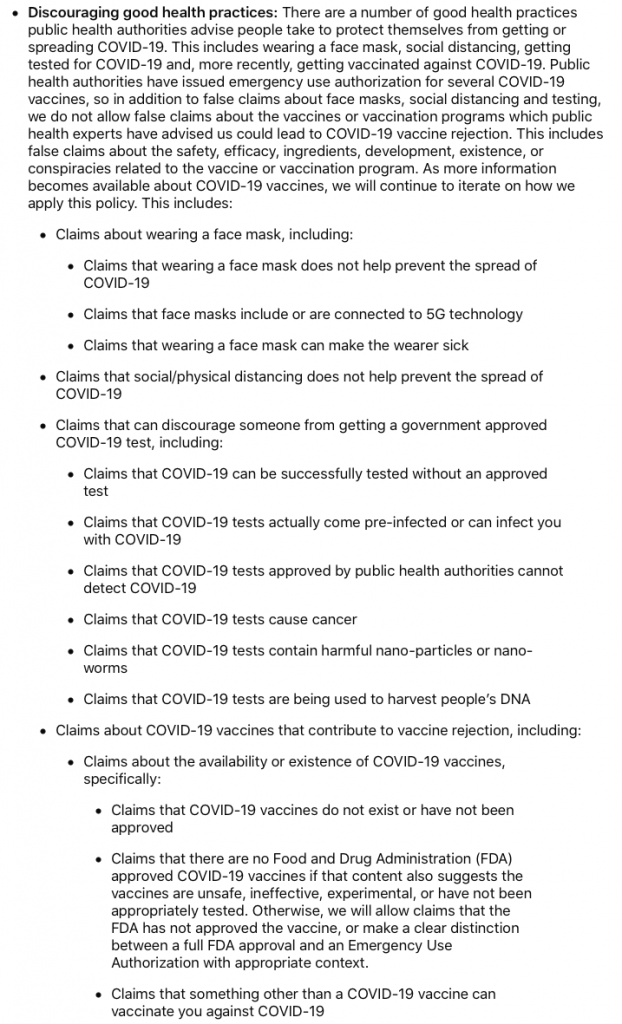 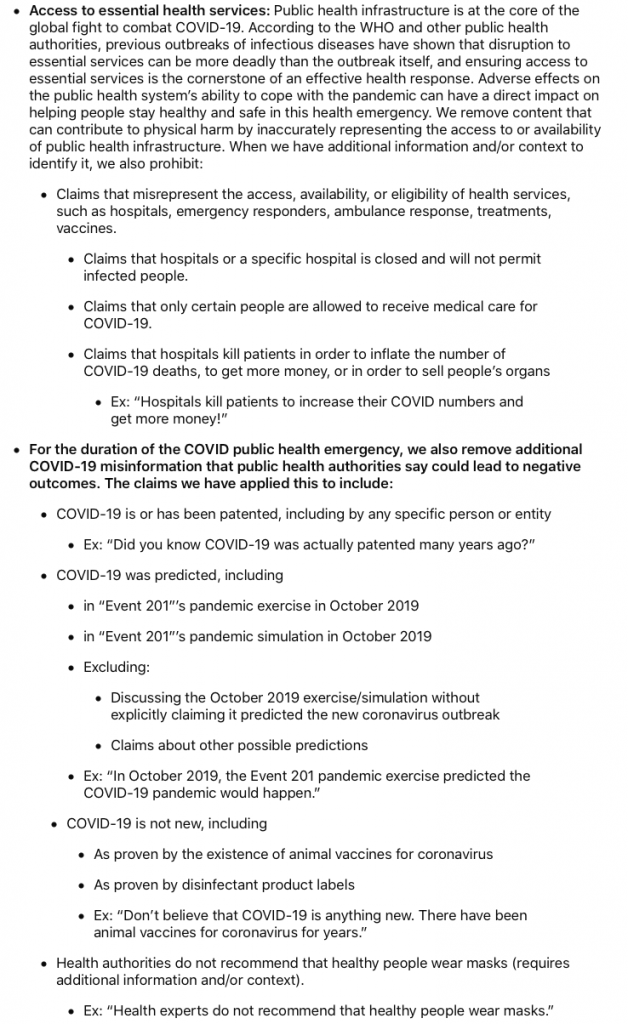 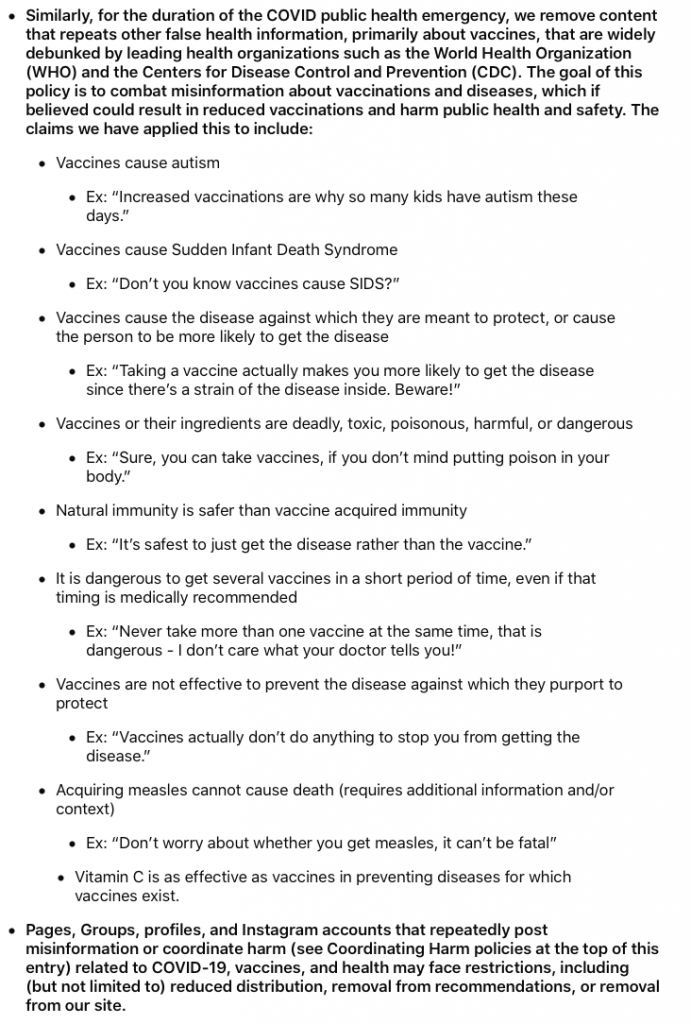 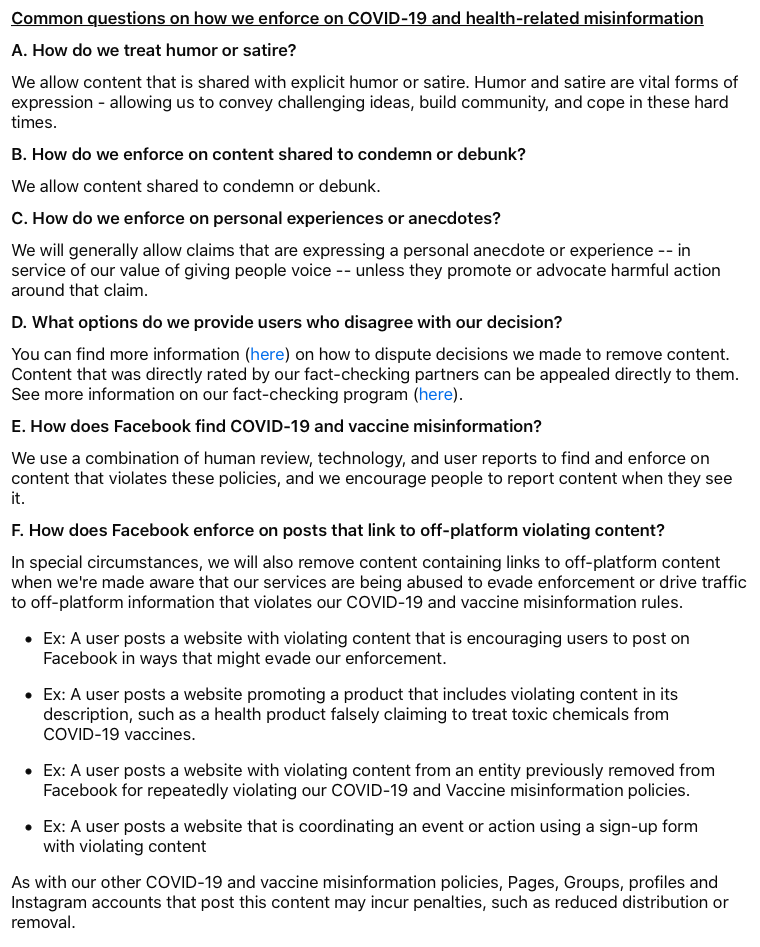 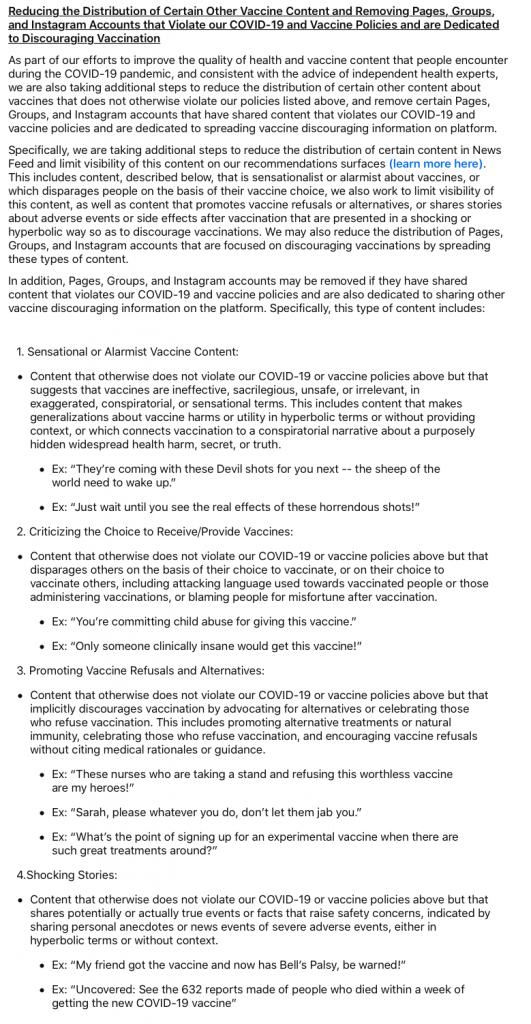