A post shared on Facebook claims the Clinton Foundation used a ship named “Evergreen” to transport and traffic children. 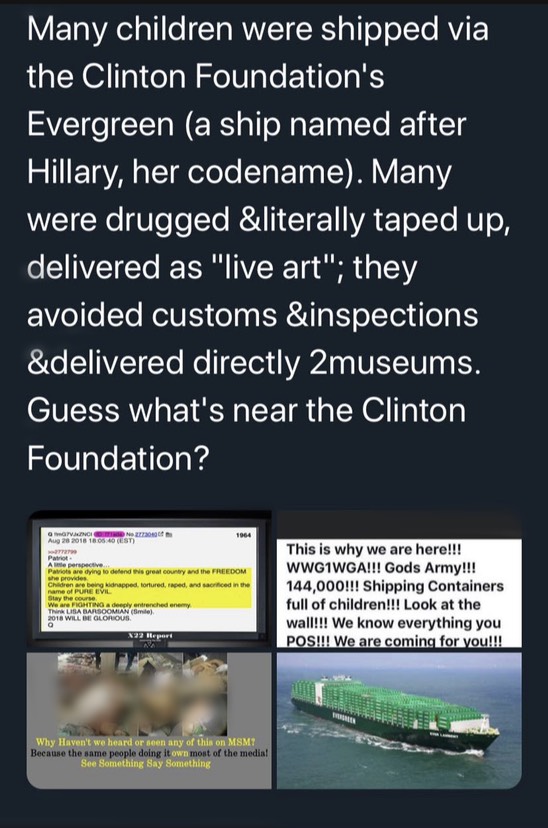 Check Your Fact found no evidence to support the post’s claim. The Clinton Foundation confirmed it does not own any cargo ships, and the photos come from unrelated events.

The screen grabbed tweet, which includes several photos, reads, “Many children were shipped via the Clinton Foundation’s Evergreen (a ship named after Hillary, her codename). Many were drugged &literally (sic) taped up, delivered as ‘live art’; they avoided customs &inspections (sic) &delivered (sic) directly 2museums (sic).” (RELATED: Did Anthony Fauci Sit On The Clinton Foundation’s Board For 20 Years?)

While former Secretary of State Hillary Clinton’s Secret Service codename was Evergreen in 2016, there is no evidence to support the post’s claim. It appears to be linked to the QAnon conspiracy theory, which “centers on the baseless belief that Trump is waging a secret campaign against enemies in the ‘deep state’ and a child sex trafficking ring run by satanic pedophiles and cannibals,” according to The Associated Press. The photos also have no apparent connection to the Clinton Foundation.

The photo of multiple children lying on a floor shows children that died in a suspected chemical weapon attack in Syria in 2013, according to The Quint. Lead Stories in September linked the three other photos in the bottom-left panel to the murder of a 9-year-old girl in Indonesia. Out of respect, the photos have been blurred.

Check Your Fact found the photo of the cargo ship on the Facebook page of the Evergreen Line South Philippines. It shows the “Ever Lambert,” the first L-type containership in the Evergreen Line fleet, according to a press release from Evergreen Marine Corporation.

The Clinton Foundation confirmed via email to Check Your Fact that it does not own any ships, just as it told PolitiFact in 2017, when another claim linking the foundation to using cargo ships to illegally transport people circulated. The fake story in 2017 alleged that over 400 refugees were discovered on a Clinton Foundation ship named “Chelsea” after authorities raided it at the Baltimore port. The Port of Baltimore denied the allegation on Twitter in May that year.

A story was published on websites mentioning the Port of Baltimore & a cargo ship raid. It is false. None of the events it cites took place.

That story originally appeared on the satire website TheLastLineOfDefense.org, which Zeke Wilekenmeyer created to troll conservatives, according to Snopes. The satire article redirected readers to a “Forrest Gump” meme.