An image shared on Facebook claims rapper Lil Baby was shot and killed in late June. 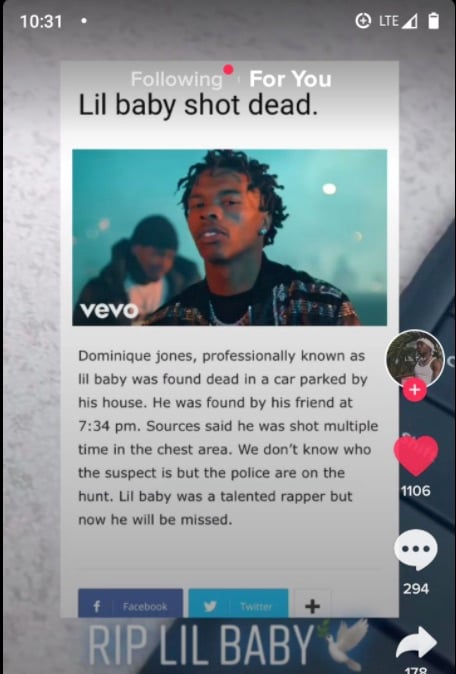 There is no evidence Lil Baby was fatally shot in late June. The claim appears to stem from a prank website.

Lil Baby, whose real name is Dominique Jones, is a Grammy-nominated rapper known for songs such as “Woah” and “The Bigger Picture,” according to Billboard. (RELATED: Did Rapper XXXTentacion Tweet That He Faked His Death?)

The image shared June 26 shows what appears to be a screen grab of an article alleging that Lil Baby was “found dead in a car parked by his house” and that anonymous sources said the rapper had been “shot multiple times in the chest area.” Police are “on the hunt” for the alleged shooter, the text goes on to claim.

There is, however, no evidence Lil Baby was killed. Quality Control, the label to which he’s signed, has not put out a press release announcing Lil Baby’s death, nor has anything to that effect been posted on the rapper’s website.

Further adding to the claim’s dubiousness, Lil Baby has posted on his verified Instagram account multiple times since June 26, the date the image was shared on Facebook. In addition, he performed at the June 27 BET Awards, and tickets for his upcoming shows are still available for purchase.

The text in the Facebook image matches that of a prank article posted on Channel 22 News, a website that allows users to create their own fabricated news articles for the purpose of pranks. Yet, while Channel 22 News clearly discloses that it is a prank website, the image in the Facebook post does not include a similar disclaimer.

What Of Afghan Journalists?

Why Did Donald Trump Take The Fifth?

What Of Afghan Journalists?

Why Did Donald Trump Take The Fifth?