An anti-Trump tweet made by the moderator of the upcoming second presidential debate has prompted speculation the next face-off will be unfair towards the president.

The tweet, made in March 2016 by C-SPAN’s Steve Scully, highlights a New York Times opinion piece titled, “No, Not Trump, Not Ever,” in which editorial columnist David Brooks encouraged Republicans to steer clear of Trump after he won the GOP nomination. 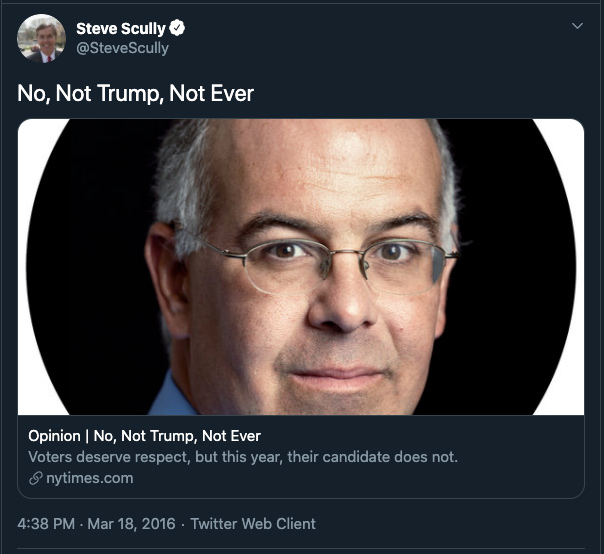 Here’s a small excerpt from the anti-Trump piece:

Donald Trump is epically unprepared to be president. He has no realistic policies, no advisers, no capacity to learn. His vast narcissism makes him a closed fortress. He doesn’t know what he doesn’t know and he’s uninterested in finding out. He insults the office Abraham Lincoln once occupied by running for it with less preparation than most of us would undertake to buy a sofa.

On social media, many took Scully’s tweet as an indication of his political sentiment, claiming the odds will be stacked against Trump at the next debate, similar to moderator Chris Wallace’s bias toward the president at debate no. 1.

Anyone think this hack is going to be fair and balanced for Debate #2? https://t.co/yXdroU0UZq

How are you going to be a debate moderator if your blatantly biased against one candidate…????

The fix is in.

Plus, it remains to be seen whether the debate commission will allow Scully to mute the president’s microphone mid-debate, effectively giving him the power to derail Trump’s trademark quick comeback attacks.

And this is the man who will be given the power to cut Trump’s mic? Ok then. ?

Interestingly, Scully as a college student also interned for Biden during his tenure as a Delaware senator, and is good friends with the former Vice President as evidenced in the photo below:

Gotta love the @VP at the Biden Beach Bash ’16 pic.twitter.com/Z9gdC6Cmi1

The second presidential debate will be held on Thursday, October 15 at the University of Michigan in Ann Arbor.

Alex Jones and Deanna Lorraine cover and comment on the first presidential debate between President Donald Trump and Vice President Joe Biden. If you looking for Alex and Deanna’s thoughts and analysis live and to the moment, look no further!