While hockey icon Don Cherry was fired after leftist backlash this week, the former Coach’s Corner co-host has been a thorn in the side of the Canadian left for years.

Widely regarded as one of the last true conservatives left in the Canadian mainstream media, Cherry was fired from Hockey Night in Canada on Remembrance Day on Monday after he suggested that more recent immigrants to Canada should pay a few dollars for a poppy to respect the country’s veterans.

The comments, which led to a massive outrage mob of leftists online calling for his dismissal from the airwaves, are not the first time Cherry has earned the scorn of Canada’s left-wing elites in the media and elsewhere. Here are five reasons the left in Canada has hated Cherry for a decade or more.

In 2010, Cherry was a special guest of then-Toronto mayor Rob Ford and was allowed to put the ceremonial chain around the neck of the controversial populist mayor whose brother Doug is the current Premier of Ontario.

Known for his extravagant dress sense, Cherry wore a pink jacket to the event saying, “I’m wearing pinko for all the pinkos out there that ride bicycles and everything, I thought I’d get it in.

“I’m being ripped to shreds by the left-wing pinko newspapers out there — it’s unbelievable. One guy called me a jerk in a pink suit so I thought I’d wear that for him too today,” he said and added, “This is what you’ll be facing, Rob, with these left-wing pinkos — they scrape the bottom of the barrel.”

After calling Ford, the greatest mayor Toronto had ever seen, he concluded, “As far as I’m concerned you can put that in your pipe you left-wing kooks.”

Last year in February, Cherry faced backlash from many in the Canadian establishment during a Coach’s Corner segment in which he asked if co-host Ron MacClean and his “left-wing pinko friends” could explain why the weather was so cold if the temperatures across the globe were rising.

“I’m just asking you, the cuckaloos are always saying there are warming trends — we’re freezing to death,” Cherry said.

Among his critics was Liberal Party Environment Minister Catherine McKenna who wrote on Twitter, “For hockey you can turn to Coach’s Corner if you want, for climate change, Canadians turn to scientists.” Others called for Cherry to be fired over the comment. 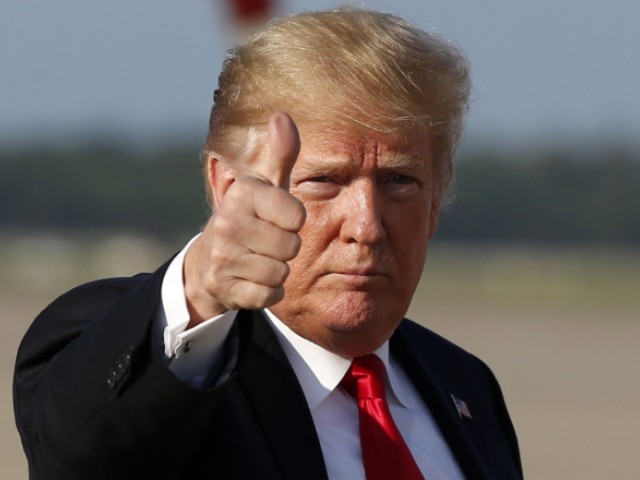 Cherry has made no apologies about being a supporter of President Trump, justifying his support to Entertainment Tonight Canada following the 2016 election.

“I tell the truth too and I know Trump’s not very well thought of in Canada and what am I gonna say? I don’t like Trump? I like Trump, I like the blue-collar guys that voted for him, middle-class guys that worked on construction. My whole life was that up until I was 36, why wouldn’t I like him?” he said.

“I like the guy and always have liked him,” he added.

In another interview with the New York Times in 2017, Cherry commented on the scorn poured on him by the Canadian left saying, “When I get a bad write-up, it doesn’t bother me anymore,” and went on to note, “A lot of people don’t like me. I’m right-wing. I’m Donald Trump.”

Cherry Tells American Leftists To Stay Out of Canada

In the aftermath of President Trump’s 2016 election win, many left-wing U.S. celebrities such as Barbra Streisand, Bryan Cranston, Miley Cyrus, Lena Dunham,  Amy Schumer and more, threatened to leave the country and move north to Canada.

Cherry, in his usual bombastic style, commented on the phenomenon saying, “The left-wing kook entertainers and the left-wing weirdo’s in the media in the US have said if Trump wins the presidency they will move to Canada. Please, we have enough of these type here now.”

Leftist commentators often scorn the Canadian armed forces for things like not doing enough to root out white supremacists, while Prime Minister Justin Trudeau told a veteran last year that veterans were, “asking for more than we are able to give right now.”

Cherry, on the other hand, has celebrated the men and women of Canada’s armed forces for years, telling Canadians to support the troops in an emotional plea following the killing of Cpl. Nathan Cirillo by an Islamist terrorist in 2014.

“If you think so much of those guys and I know you do,” Cherry said during Coach’s Corner, “let’s help the wounded. Help the guys that are trying to get jobs. … Send the money.”

“What a beautiful guy, that’s a rescue dog, that dog would have been put to death if Nathan hadn’t got hold of him …people that rescue dogs like that, unbelievable,” Cherry said while looking at pictures of Cpl. Cirillo and added, “Doesn’t he look like a guy you’d like to sit and have a pop with?”