First of all, a politically incorrect statement. The people who are rioting over the death of George Floyd, who are destroying businesses and homes and property of people who had nothing to do with this unfortunate man’s death, should be punished according to the law just as you or I would be if we were to do these things. There should be simply no tolerance for such actions. Yet in these cities the posture of law enforcement is to stand down and let these people rampage and destroy things, as though they have some special privilege to do so. In fact the stance of the liberal governments in these cities, in letting the riots continue, only further entrenches prejudice. This is a bait and switch to be perpetrated on the African-American community and it is a travesty that they continue to be taken in by such optics and “expressions of outrage.”

Dr Steven Turley gives a phenomenal breakdown of this spate of recent and current events and we feature his video in this article.

However, we want to make some other observations about this new wave of riots:

One city, Memphis, is in the former South. But what do the demographics show about the political alignment of these places? Well, in these following maps Democrat is blue and Republican is red:

Here is Memphis, courtesy of the Five Thirty-Eight Project: 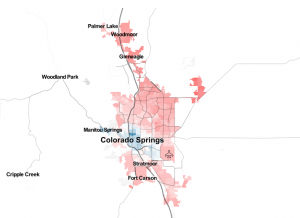 piece linked here have this headline:

‘We don’t have law and order’: Black and Latino business owners face destruction in Minneapolis

This exposes the lie. The violence is certainly not against white “racists”, it is being directed against other blacks and Latinos, who had nothing to do with the killing of George Floyd.

It is further reported that Black Lives Matter has been spotted in these rioting centers, but strangely, they are equipped with various tech that allows them to coordinate their “work” which has in the past resulted in race riots having extreme levels of rage. This has yet to be confirmed, but it fits the pattern.

One thing of peculiar note: Look at the photo that heads this piece and look at the first several seconds of the video below. These were taken at the same exact location. Somehow the word “staged” leaps to mind.

Now for Dr Steve, whose commentary is stellar, as usual:

Now, one of the most successful by-lines used to justify the riots is you do not understand the plight of the black people. You are not black. You are white and therefore privileged… and so on. This makes it supposedly impossible for anyone who is not black to speak out in opposition to what the black people are doing.

Dr Steve is the first person I have heard give a real name to this phenomenon. He terms it the “power-plus-prejudice definition of racism.” This is the notion that non-white people cannot possibly be racist. They cannot be racist because they do not have political power, so the notion states.

It works! It got Chris Cuomo admitting to being racist, and it is used to cow non-minorities into silence for fear of being seen as “racist” by others who really are  racist, in this case the activists themselves.

In other pieces I make note that this sort of racist activism actually does further damage to the African American community. In other words, there is not one shred of effort spent to show that:

Now were any of these things not empirically true, then yes, we would have the need of a protected class for a certain group of people. But Doctor Martin Luther King, Jr. himself noted that the judgement of character ought to be the only one used, and nothing else, and he was a black man. He sought no handouts. He sought opportunity for everyone to be the same.

It is astounding how many civil rights leaders since then, including members of his own family, have failed to hold that concept. Now, we have race riots the same as in the sixties, but these are fabricated causes.

Liberals promote this decay through their social Marxist views. The real tragedy is that so many people do not see this for what it is; they do not realize that such Marxists only see you as the means to their end. No person has intrinsic value in Marxism. Every person is just a tool to be used to gain the end, whatever that end may be.

It also comes as no coincidence that the surge in cultural Marxism is amplified this week as churches have been closed or denuded of parishioners. Prayer is less, so the sense of God is less and there is that much more room for evil to flow in and fill our lives and our world.

This is what has happened.

Unemployment MUCH Worse Than Claimed as We Enter Phase 2 of the Recession!