The inertia system is nothing new, as it was first developed by and used in Danish gunsmith Carl Sjörgren’s Normal shotgun in 1903, the same year John M. Browning’s Automatic-5 hit the market. In function it’s a simple system with few parts. When the gun is fired, it begins to move rearward; within the bolt is a strong spring that holds the rotating bolt head firmly in battery with the locking recesses at the barrel’s breech. By the time the spring’s tension is overcome, the ejecta (shot and wad) have exited the muzzle, and the bolt begins moving rearward, driven by the remaining recoil.

Thanks to the simplicity of its inertia-driven action, the EAA MC312 is easy to disassemble into a few subassemblies for routine cleaning. Sights consist of a serrated, ventilated rib with a red fiber-optic pipe near the muzzle (r.).

–
The bolt then extracts the fired shell, which is kicked out by the ejector nub, and, if a fresh shell is present in the magazine, it triggers the bolt release, reloading the gun. The bolt locks open when the last shell is fired. When empty, the two-piece carrier necessitates the tripping of the carrier latch, located on the right side of the forward portion of the trigger guard, allowing the bolt to be locked open.

Employing an inertia-driven operating system, EAA’s MC312 is one of the least expensive shotguns of its type on the market.

This style of action is very easy to clean, as there are few parts, and the MC312’s owner’s manual includes exploded drawings to provide sufficient guidance in the disassembly of the gun. With the barrel removed, the handle is pulled away from the bolt, allowing it to then slide out of the receiver. At the rear of the bolt is a cross pin that is drifted out while the firing pin is held in its forward position, and is then released slowly—as the tension provided by the spring can propel the firing pin across the room if you’re not careful. Following removal of the firing pin and spring, the bolt index pin is removed and the bolt head slides out. The MC312 can be cleaned, lightly lubed and re-assembled in the reverse order.

Drifting out a one-way pin releases the trigger group. The guard is of a composite material with metal working parts. The cross-bolt-style, trigger-block safety is located in the guard immediately behind the trigger. Of real interest is that the trigger of the test gun was amazingly crisp, breaking cleanly at an average of 5 lbs., 3 ozs., as measured with a Lyman Digital Trigger Pull Gauge, with absolutely no preliminary take-up.

–
The polymer stock and fore-end have molded checkering, and that on the fore-end is sufficiently coarse to enable a good grip—less so on the semi-pistol-grip stock. Also molded into the buttstock is a sling swivel that mates with another on the magazine cap for hands-free carrying. The ventilated rib mounts a luminescent bar-style front sight. Our test sample was the black model, however, a camouflage version is also offered by EAA. 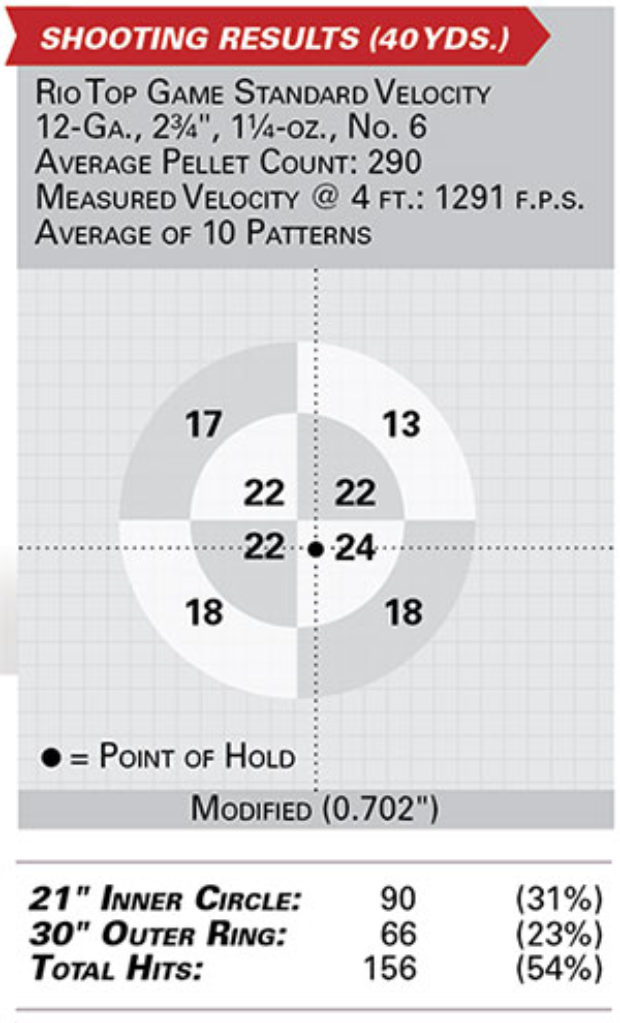 We took the MC312 to the range and first shot it at the 16-yd. fitting plate. We found this gun shot about 3″ high and 3″ to the left, indicating a correction of 3/16ths more cast off and perhaps an 1/8″ more drop. This gun does not include stock-adjusting shims, but add-on stock pads can be used to change the point of impact. We then shot patterns using Rio 1¼-oz. No. 6 lead game loads, a popular pheasant and rabbit shell. The MC312 comes with five choke tubes marked with both names and stars that also match notches at the muzzle for quick recognition. We measured their constrictions based on the cylinder bore of 0.724″ with a digital bore micrometer: cylinder, 0.004″; improved cylinder, 0.011″; modified, 0.022″; improved modified, 0.031″; and full, 0.038″—all very close to standard specifications.

For pattern testing we used the modified tube, as it would best match hunting conditions. The patterns were quite uniform, with center density. One could expect good results hunting with this combination. We also shot some clay targets, and compensating slightly for the higher pattern placement, scored very well. Although this is a 3½”-chambered semi-automatic, it bears mention that it functioned very well shooting clays with 2¾”, 7/8-oz. No. 8 Rio light target loads.

We did notice a good bit of recoil with the heavier loads due to the light weight of this aluminum-receiver gun, and the solid rubber recoil pad didn’t do a great deal to soften the recoil. One might consider adding a pre-fit high-performance pad, especially if one is bold enough to shoot 3½” magnums.

For the low MSRP of $399 the EAA MC312 would be a good gun to take into rough elements or to keep in the truck’s tool box just in case you spot a pheasant in a brushy corner or geese coming into the field.

‘It’s Ravaging Our People’: John Kennedy Holds Nothing Back With Powell, Yellen Over Skyrocketing Inflation