Economical and absolutely on target, the Savage B22 Precision redefines the affordable match rimfire rifle.

What Makes The B22 Precision So Accurate:

By any measure, NRL22 (National Rifle League .22-caliber competitions) is the fastest-growing shooting sport in the country, if not the world.

What started as a few small matches three years ago has grown to 189 registered clubs in 44 states and five countries. Most hold monthly matches, the course of fire for which is posted online in advance. As a result, thousands of shooters are lining up at the exact same stages—whether they’re in South Dakota or South Carolina. All it takes is a .22 rifle, some ammo and a 100-yard range.

Savage Arms is no stranger to NRL22. Its lineup of affordable rimfires has dominated the NRL22 base class, for which the combined cost of the rifle and scope can’t exceed $1,050. At the 2019 national match, where the top shooters in the country competed head to head, shooters running the Savage B22 took home three of the top four base class trophies. 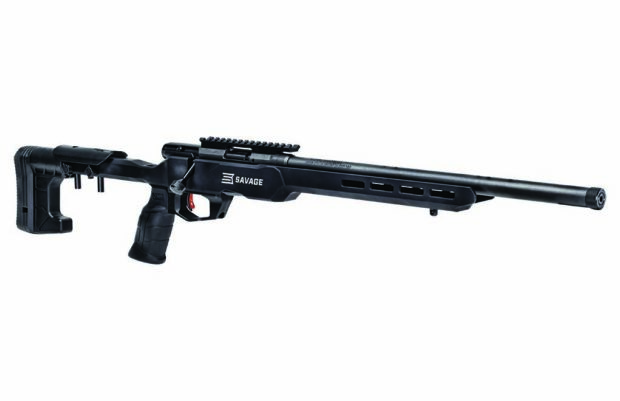 This year, the Westfield, Massachusetts, gunmaker has doubled down on that dominance over affordable rimfire accuracy. The B22 Precision, clearly an NRL22-inspired rifle, pairs the successful B22 action and magazine system with a heavy target barrel, chassis rifle and target trigger—all at an MSRP of $599.

The B22 Precision was born out of a partnership between Savage and British Columbia chassis builder Modular Driven Technologies (MDT). The chassis is one-piece machined aluminum from buttstock to forend (there’s no swapping buttstocks as can be done on MDT’s other designs). A spacer system allows length of pull adjustments from 12.75 to 13.75 inches. There’s an adjustable cheek riser. There are four M-Lok slots on the forend at 3, 6 and 9 o’clock. There’s a forward sling stud and M-Lok slot in the buttstock for a rear sling attachment. The rifle comes with an angled MDT grip with a large palm swell.

The chassis-to-barreled-action fit is exceptional. Torqued down, there’s zero wiggle or flex, and the barrel centers perfectly in the channel. However, finding the best way to torque them together took some experimenting. 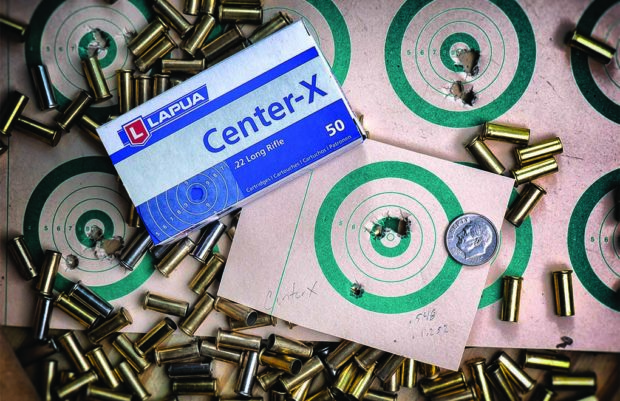 Here’s a typical cold bore group. Note that the first shot is low by about an inch. The rest of the shots cluster well. Center-X shot low from a cold bore every time. Others, such as Greentag, shot high by about an inch before returning to center.

With the Savage actions, MDT recommends starting the action screws and then lightly pushing the action forward into the recoil lug before torquing down to about 65 in-lb. When I did this, one of my two B22 magazines no longer “clicked” into the rifle. It fit, but not well. This also threw off the bolt timing a bit. Every 30th or 40th shot didn’t clear the action on ejection, tumbling into the open air between the bolt face and breech and then settling atop the magazine.

Some bullets also caught on the edge of the chamber, shaving some of the soft lead nose—which is detrimental to accuracy. This was especially the case with the flat-nosed bullets I tested. The situation felt dire, but all these issues went away by resetting the action with some rearward pressure. The rifle has performed exceptionally well and without issue since.

Lesson learned: Take your time setting action to chassis and experiment with placement – or, don’t take it apart in the first place. 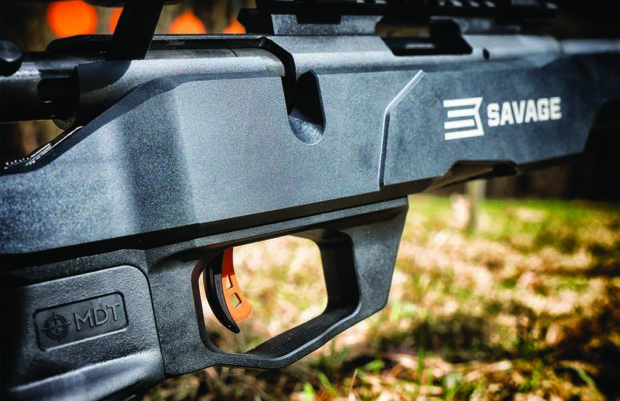 The aluminum MDT chassis has the fit and finish we’ve come to expect from this British Columbian precision builder.

Besides the chassis, the trigger is what really sets this rifle apart. Rather than the standard rimfire AccuTrigger, Savage developed a new .22 LR target AccuTrigger. The break is crisp and clean, with zero creep or crunch. Mine measured 2 pounds out of the box.

The button-rifled, 18-inch barrel is threaded for a suppressor. There’s an oversized, tactical-style bolt knob that makes the short bolt throw feel even shorter.

The B22 magazines aren’t perfect. I did notice some bullet shaving on the lip of my magazines after about 200 rounds, but at the end of the day, the overall rifle build proved especially accurate, handy and ready to compete—all for a real-world price of under $500.

This test rifle was topped with a Vortex Diamondback Tactical 6-24×50 scope on the provided zero MOA Picatinny rail—an NRL22 base class favorite. To familiarize myself with the particularities of the gun, 300 rounds of CCI Standard ammunition were sent down the barrel. My very best .22 LRs have not shown their true accuracy potential until the 300- to 500-round mark, so it was important to break in the rifle before proper group shooting. 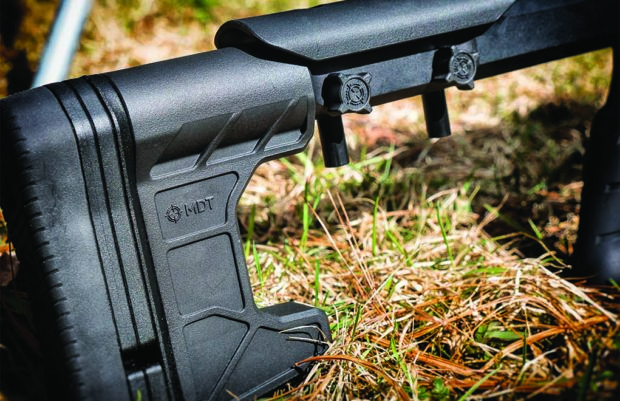 The buttstock is made by MDT and attaches directly to the chassis. Just about the only things on the whole rifle that feel “price point” are the knobs on the cheek riser.

The best chassis/action fit was determined, as explained above, and the 2-pound factory AccuTrigger pull weight was turned back to 1.5 pounds, according to my mechanical Timney pull weight gauge. This is a bone-simple process: Simply turn the target spring clockwise on the.22 LR target AccuTrigger. There’s no adjustment screw as is found on other AccuTrigger models, so the adjustment can be made by hand.

In order to let the rifle settle into that new bullet and lube, the first 10 shots of each type were not measured. The five-shot groups of record were measured from the outside edge, and .224 inch (the width of a .22 bullet) was deducted for a final on-center figure. All told, I put 600 additional rounds through the gun while accuracy testing. 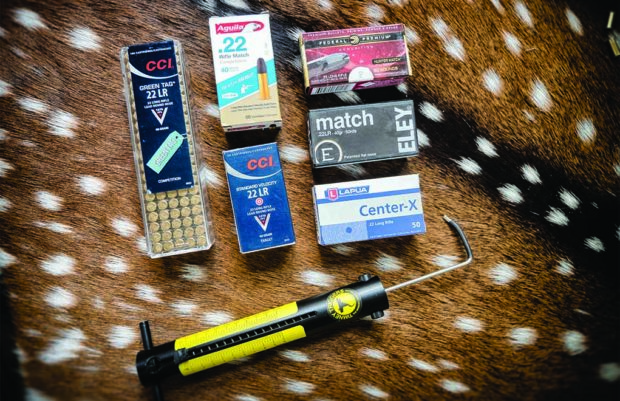 All the ammo that was tested. Everything except the Aguila shot acceptably well.

CCI Greentag proved the most accurate on average, with just over half-MOA performance at 0.529 inch. The best group was an absolute stunner—0.268 inch with CCI Standard. Was that group an exception? Yes, but it goes to show the rifle can shoot inexpensive ammo very well. CCI Standard averaged a group size of 0.661 inch. Higher-dollar ammo did well too: Lapua Center-X came in second only to Greentag. Eley Match produced many tiny clusters and showed the best standard deviation (SD) of 9.5—a critical metric if you hope to shoot very long-range.

While every individual rimfire rifle has its own ammo preferences, I know of other Savage B22 Precisions in the world that also shoot CCI Greentag remarkably well. So, if you get this rifle, Greentag should be your first ammo consideration.

If you’re looking for a sharp-shooting .22 LR that won’t break the bank, the Savage B22 Precision is your next rifle. It’s match-ready out of the box, spits affordable ammo into teeny-tiny groups and looks like a rifle worth twice the price.

While I laid down some very good averages and a few stunner five-shot groups, .22 LRs barrels are like wine—typically improving with age. I have every reason to believe this rifle will shoot even better as the round count eclipses 1,000 (and, as usual, the “monkey” behind the trigger better learns the gun!).

My guess is that this rifle will soon come to dominate base class NRL22 meets. Topped with the likes of a 6-24 Vortex Diamondback Tactical or Athlon Argos BTR, it’s an excellent precision rig for shooters, both new and old. This would make an excellent club rifle as a rig effectively waiting in the wings for new shooters who want to try NRL22 without immediately investing in new kit.

And, while the B22 Precision fills a competition niche wonderfully, that’s surely not the only job you can find for a tack-driving .22 LR. It’s perfectly suited for less-formal precision rifle practice or even small-game duty. I plan to do just that with mine: compete with it all summer and then, come September, lay down a few tree squirrels with it.

There isn’t another .22LR on the market that packs so much into what is effectively a $500 rifle.

For more information on the Savage B22 Precision, please visit savagearms.com.

The article originally appeared in Gun Digest the Magazine.