We’ve got a history in my family with shotguns in less-than-12-gauge. The first firearm I ever shot was a Stevens 311 side-by-side in .410-bore. My grandfather, not the largest guy on the planet, was an absolute sucker for the 16 gauge. I’ve got a safe full of shotguns in that now-rare gauge, from a genuine Winchester 1897 pump-action to a Remington Model 11 and others. Today, it seems as though 20 gauge has usurped the 16 in the “not quite 12 gauge, but nearly as powerful” category, and for good nreason—it has 66 to 75 percent of the muzzle energy of the 12 gauge, but with significantly less felt recoil.

So, that’s how we came to have a pair of new 20-gauge shotguns in EAA’s Churchill line to review. New for 2021, these defense-oriented scatterguns are offered in a semi-automatic version and a pump-action model. Both offer a pistol-grip stock, “breacher” muzzle device and an EAA house-brand red-dot sight. Maneuverable 18.5-inch barrels grace both shotguns, as does five-round capacity, and each also has a red fiber-optic front sight and a short section of Picatinny rail for mounting the red dot. How the guns operate is the only significant difference between the two.

We’ll start with the obvious: Yes, these are Turkish shotguns. EAA makes no secret of the origin; if you visit the Turkish website for Akkar, you see the same shotguns; in fact, the Akkar website is printed on the box in which the guns are shipped. With Remington’s (likely temporary) egress from the marketplace, there’s a rather serious shortage in available, American-made, shot-delivery-device options. While I understand and endorse buying American goods whenever possible, circumstances may dictate other options. In the case of the EAA Churchill line, these tactical models have two salient features in the current market: they’re affordable and available.

–
How affordable, you ask? The semi-automatic 220 model has an MSRP of $561, which includes the red-dot sight. The 620 pump-action comes with the same red dot at a price of $427. For a gun that’s ready for defensive-duty right out of the box, that’s a great price for a truly convenient package. While there are a fair number of folks who enjoy tinkering, customizing and changing components on their firearms, there are plenty of people who just want something that works that they don’t have to think about. It’s analogous to factory-available pickup trucks that come with big tires and beefed-up suspensions. While some motorheads prefer to spec out their own off-roaders, there’s a definite market for turnkey variants. Think of EAA’s Churchill Optics Tactical line of shotguns as turnkey defensive scatterguns. 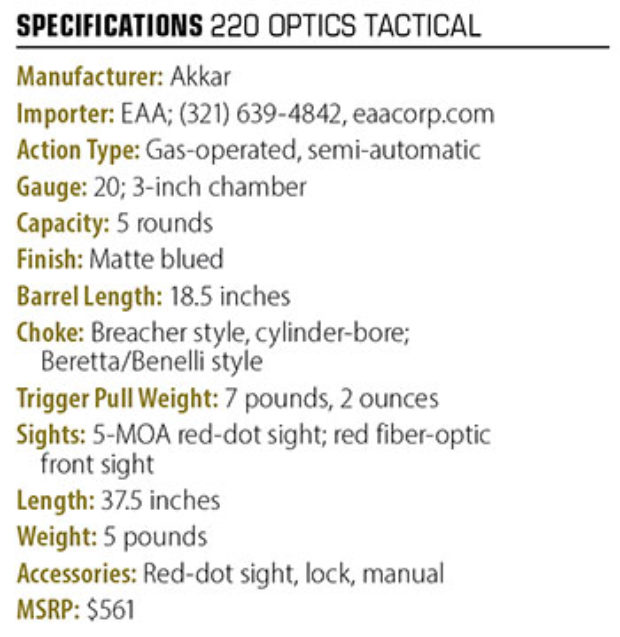 Let’s also not lose sight of the 20-gauge advantage here, either. With a significant reduction in felt recoil thanks to the milder 20 gauge, this line is friendlier to new shooters, smaller-stature folks and anyone who isn’t a big fan of massive recoil. While the 12 gauge might be the king in the realm of fight-stopping and overwhelming muzzle energy, it’s less-than-ideal for someone starting out their shotgun experience. For a modest investment, one might choose to add a Churchill 220 or 620 to their defensive armory to expand the circle of potential allied defenders in their home, for example, while at the same time having a lower-recoiling option for spreading the “gospel of the gauge” to the large number of folks new to shooting.

Looking at the Churchill Tactical line, there’s a word for both guns, and that word is “utilitarian.” Furniture is nondescript polymer; not good or bad, just, well, plastic. It’s good for weight reduction and helps keep costs down, but isn’t going to grab your attention like polished hardwood. This is hardly a knock on the line, mind you; it’s a testament to the task for which these guns were designed. The receiver sports a matte-black finish while the barrels wear bluing, and the match between the two finishes is even and congruent. There’s no significant change from the receiver to the barrel to jar one’s aesthetic senses—if one were to concern oneself with the aesthetics of tactical shotguns, that is.

–
Differences between the pump-action 620 and semi-automatic 220 are limited mainly to the function of the shotgun. Areas where the function is identical, such as the buttstock and pistol grip, barrel, top rail, etc. are essentially indistinguishable. Minor differences, such as the bolt handle on the 220 or the slide-release lever on the 620 are certainly present for obvious reasons, but for the most part, the two shotguns could pass for twins. Fraternal twins, obviously, as the open section of tubular magazine that shows on the pump does make it easy to tell the two apart, but you might not immediately recognize which is which on a crowded gun rack. Granted, most people are going to buy one or the other, so telling them apart really isn’t a big deal. 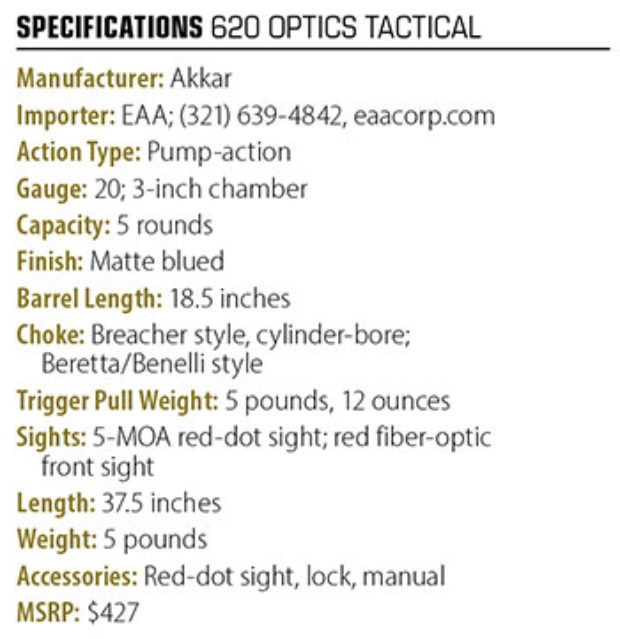 Operationally, both shotguns are run pretty much like every other shotgun of their respective type out there. Both load through a loading gate located on the bottom of the receiver, both have magazine tubes capable of holding five rounds, both have a pushbutton safety at the rear of the trigger guard and ejection occurs on the right side of the receiver. Press the bolt release or release the slide to chamber a round, the rest should be familiar (and if not, avail yourself of some quality shotgun instruction). It boils down to whether you want to work the action yourself, or let the gas operation do the work for you.

The addition of the 5-MOA red-dot sight to the top of each shotgun speaks to the simplicity—and ubiquity—of the red dot. In addition to keeping the aiming sequence similar to the carbine (and now pistol) with which many are familiar, the red dot allows both-eyes-open for increased visual information. In a home-defense situation, getting as much information to the brain as quickly as possible is an exceedingly good thing. Now, granted, the house-brand dot that comes with either Churchill Tactical shotgun isn’t a Trijicon, Aimpoint or EOTech, but you shouldn’t expect it to be (and, all of those optics cost more than the 620 shotgun). However, both dots on both shotguns held up in our testing, and while it wasn’t as exhaustive as some would like, if the optic was going to exhibit problems, we’d have had a chance to notice.

Speaking of testing, that’s the real proof. With recent events, finding a wide selection of ammo—especially in 20 gauge—was a little more challenging than in years past, but we managed to pull together a decent assortment of birdshot, buckshot and even slugs. Testing was weighted a little more heavily on the semi-automatic 220 Tactical, because with the pump-action 620, it was either going to work or not. Semi-autos are obviously more complicated and sensitive to ammunition variation, so we felt the focus should center on running a wider range of projectiles through the 220.

Initial results were, well, there’s no way to put this differently—discouraging. Both models exhibited a glitch where two shells would exit the tubular magazine at the same time, fully jamming the lifter in the down (empty) position. This meant the action could not be closed until the two shells were pried apart, a complicated task given the tight confines of the receiver. It happened repeatedly, enough to give pause that this was a significant problem and not just a slight glitch to work out. A call to EAA and replacements were on the way. 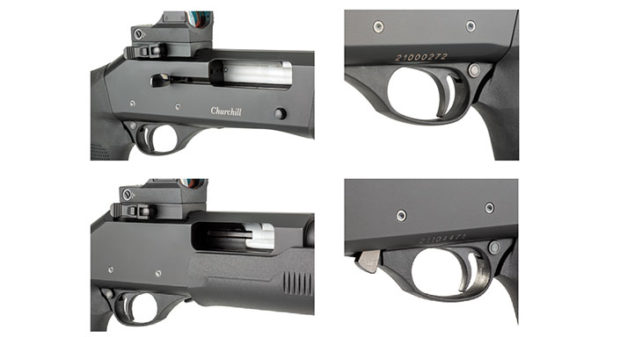 Slight differences between the semi-automatic 220 and the pump-action 620 are evident in the receiver, where the 220 has the requisite bolt handle and bolt-release button featuring prominently as distinguishing factors • Also differentiating the two models is the trigger guard, where the slide-release lever on the pump-action 620 sits forward of the guard itself; however both shotguns share the same crossbolt safety mechanism.

This does drive home two salient points: One, that you should absolutely test any new firearm for function. I don’t care how reliable the action is supposed to be. I don’t care how flawlessly it ran in an online review, test it yourself. Two, even the vaunted pump-action shotgun can malfunction. Where EAA’s Churchill Tactical line is set up as a turnkey defensive arm, one may be tempted to forgo some of the necessary testing. Again, don’t. For those of us steeped in the firearm culture this is second-nature. However, with literally millions of new gun owners joining our ranks lately, it’s good to repeat this advice.

Prominent and polymer, both models include the same pistol-grip stock • Offering six brightness levels and night-vision compatibility, the 5-MOA, house-brand red- dot sight also has a quick-release mount. Generous and forgiving, the rubber buttpad soaked up recoil, even from 3-inch shells

–
EAA’s replacement shotguns worked near-perfectly, and more meaningful data was achieved. With the “breacher” choke tube installed, the pattern of No. 3 buck at 10 yards stayed entirely on an 11×17-inch sheet of paper, a quick-and-dirty test for maximum-spread distance. Assuming that target is representative of center-of-mass on a standard-issue bad guy, find the farthest distance at which all pellets remain on paper—any pellet or pellets that fall outside that area are potential hazards to innocents. As the pump-action 620 and semi-auto 220 have the same barrel length and choke pattern, it was not surprising to find the two shotguns had the same 10-yard maximum. Slightly surprising, in a good way, was both red-dot sights being darn close right out of the box. At the 10-yard distance, one was spot on, and the other needed only a slight elevation adjustment. This surprised me, because it’s good luck, something of which I have little.

Slightly sleeker, the 220 semi-auto variant features a trim fore-end, while the 620 pump’s is more utilitarian, with plenty of space to grip

–
With the ammunition situation the way it is, we had to take what we could get for 20-gauge shells. Most of the rounds fired in testing operation were birdshot, with Winchester, Rio and Remington Nos. 7½ and 8 loads with velocities from 1,200 to 1,300 fps. Only Remington No. 3 buckshot  was tested, simply because that’s all the 20-gauge buck we had. Winchester PDX1 Defender slugs were available, but in such small quantity that we could only verify that they would work in the Churchill shotguns and were accurate out to 20 yards. Overall, nearly 200 rounds of various-weight birdshot, 50 rounds of buckshot and 20 slugs were fired through both guns, with no problems other than the initial jamming experienced in the first pair. We did note that the semi-auto 220 preferred the lighter, faster No. 7½ shot at 1,250 to 1,300 fps rather than the heavier No. 8 at 1,200, although it would run them under protest (hand-cycling the second round in the magazine was necessary for the first two magazines). Semi-automatic shotguns, even high-end models, are notoriously finicky with some loads, particularly lighter-weight ones. This is not a problem for those using buckshot for home-defense.

Cylinder bore and tactical in appearance, the breacher choke is the same on both models • Protected by stout ears, the red fiber-optic pipe offers a backup-sight option.

Bottom line, EAA’s Churchill Optics Tactical line of shotguns represents an affordable, out-of-the-box offering with lower recoil for any shooter. As with any new firearm, test thoroughly to ensure proper operation, find a defensive load it likes and keep it clean and well-lubricated. A red-dot sight gives rapid target acquisition, ideal for defensive scenarios, while the 20-gauge chambering offers reduced recoil. Check out these Churchills to defend hearth and home.

Both loading gates are slightly enlarged to facilitate faster reloading, but can still pinch your thumb. With practice, loading either shotgun was simple.

FACT CHECK: Does This Video Show Russians Running Away After A Ukrainian Strike?