In the San Francisco Bay Area of California, where racial justice protesters are calling for defunding the police, the homicide rate has risen 14 percent so far in 2020. 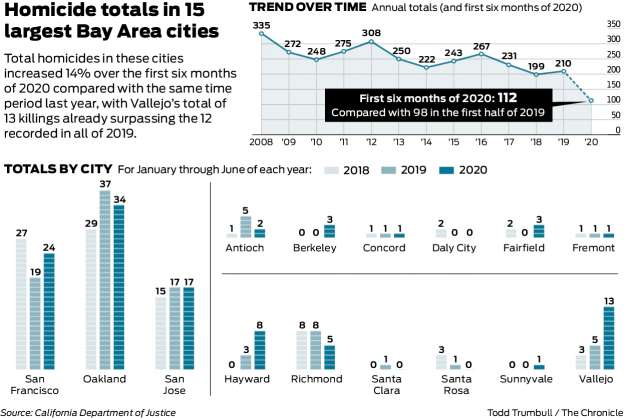 One member of the city council in Vallejo, which has the highest number of murders, blames the increase on “systemic racism.”

“I think it’s the chickens coming home to roost,” said Hakeem Brown, who is running to be mayor of the city, said in a San Francisco Chronicle report. “I think it’s a lack of investment in our youth, a lack of opportunities … systemic racism in Vallejo and generations of poverty among poverty.”

The Chronicle reported on its analysis of the increasing crime rate:

While reports of robberies, rapes and smash-and-grab auto burglaries fell in the region’s largest cities, the most serious of violent crimes — homicides — crept up 14% over the first half of 2020, stalling a broader historical trend of fewer killings, a Chronicle analysis found.

Some of the increase can be traced to bloodshed in Vallejo. By the end of June, that city’s 13 killings were nearly triple the five recorded over the first six months of last year, and had eclipsed the 12 total people slain there in all of 2019. On Thursday, the city recorded its 14th killing of the year when a 21-year-old man was shot to death.

Overall, killings in the region’s 15 largest cities increased from 98 to 112 compared to January through June of last year. But while cities like San Francisco, Hayward and Berkeley witnessed more deadly violence, nowhere in the region experienced a spike as stark as Vallejo.

The Chronicle interviewed David Abrams, a University of Pennsylvania Law School professor, who said his study of crime trends found significant drops among several types of crime in many major cities.

“Homicides are the exception,” he said and noted that crimes have either climbed or stayed flat in most cities he studied. “COVID has definitely had a major impact on crime, with the exception of homicides and shootings.”

“The Chronicle’s homicide counts do not include killings by police or those deemed by authorities to be in self-defense, which aligns with state and federal figures and allows for historical comparison,” the news outlet reported. “According to police crime data compiled by the Chronicle, six of the area’s largest cities experienced an increase in homicides over the first half of 2020, five cities recorded a decrease, and four cities’ counts stayed the same as the first six months of 2019.”

Biden Dismisses Question on Whether Vaccine Goal Is Improvement: ‘Come on, Give Me a Break’