An undercover cop was attacked in Hong Kong amid backlash over a new law prohibiting the use of masks in public, according to a newly-surfaced video from the region.

The video shows a plain-cloths officer being petrol bombed and struggling to gain control of a firearm late Friday night.

A clip online shows a police officer being attacked by protesters. A petrol bomb was thrown at him and his shoes were briefly on fire. He dropped his gun as he got away.
As a protester tried to grab the gun, the officer rushed at him and kicked it aside.

The riots began Friday after Carrie Lam, Hong Kong’s Chief Executive, invoked a colonial-era emergency powers law intended to stop the protests by banning the use of masks.

“As the current situation has clearly given rise to a state of serious public danger, the executive council decided this morning to invoke the power under the emergency regulations ordinance and make a new regulation in the prohibition of face-covering – which is essentially an anti-mask law,” said Lam. “It is essential for us to stop violence and restore calmness in society as soon as possible.”

“We hope that the new legislation can help us to achieve this objective.”

Now in effect, the ban makes it illegal for anyone to cover their face with a mask or paint while attending an unauthorized assembly or a public gathering of 50 or more people.

Now on Pedder Street, Central: crowd gathering after the HK government announced a face mask ban in public gatherings at 3pm. The ban is going to go live at midnight today. Nearby malls are closing now and many office workers have left early. Really felt ppl’s anger in the air. pic.twitter.com/Z6SqZj0nLM

Backlash in the region has only intensified since the ban as more assaults on officers have been reported, a Hong Kong police statement condemning “rioters for attacking officers and risking the lives of others” explains.

Matt Bracken joins Savanah Hernandez and Greg Reese to break down the protests in Hong Kong against a Chinese communist invasion. 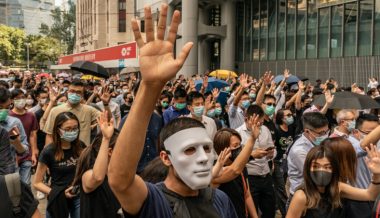 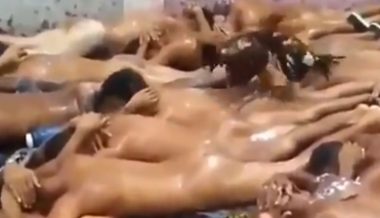