During the second day of her confirmation hearing before the Senate, Jackson answered a question from Sen. Chuck Grassley (R-IA) about a D.C. District Court ruling in which she bypassed federal statute to declare that former President Donald Trump’s administration could not expand expedited deportation.

“Expedited removal … a way in which Congress had given the authority to the Department of Homeland Security to make a decision about how to deport people, who are noncitizens,” Jackson stated, opting for President Joe Biden’s preferred characterization of illegal aliens.

In the 2019 case, the pro-mass immigration group Make the Road New York sued the Trump administration for its expanded expedited deportation of illegal aliens.

Jackson issued a preliminary injunction to halt the policy on the grounds that the administration violated the Administrative Procedure Act (APA) and did not sufficiently weigh the impact that the policy would have on illegal aliens. 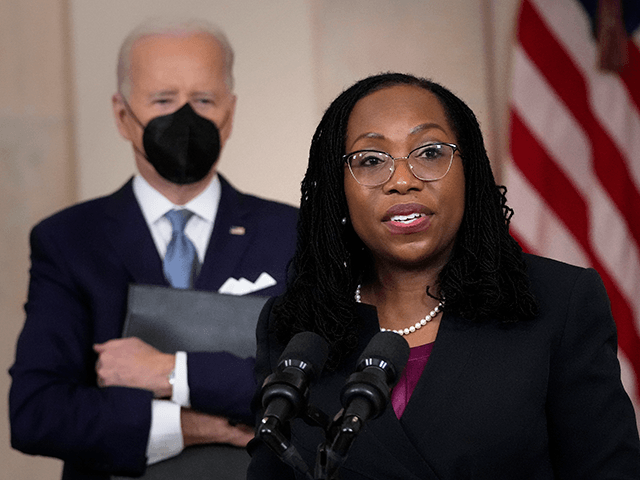 Judge Ketanji Brown Jackson makes brief remarks after U.S. President Joe Biden introduced her as his nominee to the U.S. Supreme Court during an event in the Cross Hall of the White House February 25, 2022, in Washington, DC. (Drew Angerer/Getty Images)

The U.S. Court of Appeals for the District of Columbia Circuit reversed, telling Jackson that she exceeded her legal authority because the statute left this matter to the discretion of the Department of Homeland Security (DHS) and did not empower a federal judge to override that judgment.

Grassley noted that Congress gave DHS “sole and unreviewable discretion whether expedited removal would apply to an alien who has not been paroled or admitted to the United States.”

“The law specifically says that Homeland Security, not the courts, was responsible for making that decision. Could you please explain why you believe a federal court could review something congress called ‘unreviewable?’” Grassley asked.

The challenge was not about the actual determination. The challenge was about the procedures that the agency undertook to make that determination. And so that statute said … that the agency had ‘sole and unreviewable discretion to decide and in interpreting that, I took into account the language of that statute and the language of another statute that Congress has enacted to direct agencies with respect to the manner in which they exercise their discretion. [Emphasis added]

“We hold that the district court properly exercised jurisdiction under 8 U.S.C. § 1252(e) over the Associations’ claims, but that there is no cause of action under the Administrative Procedure Act to scrutinize the Secretary’s designation decision so long as it falls within statutory and constitutional bounds,” the court stated.

As Breitbart News previously reported, Jackson has used the terms “noncitizen” and “undocumented non-citizens” in prior rulings rather than using the terms “alien” and “illegal alien,” which are regularly used in court and federal statutes.

How Will The Democrats Get Rid Of Biden?