Former FBI lawyer Lisa Page has emerged after two years of silence to whine about President Trump’s attacks against her and her then-lover, colleague Peter Strzok.

In an attempt to play the victim ahead of the Inspector General’s imminent FISA report release, Page unloaded on President Trump’s attacks against her and said she decided to speak out after he acted out a fake orgasm mocking her texts with Strzok during a rally last month.

“Honestly, his demeaning fake orgasm was really the straw that broke the camel’s back,” she told the Daily Beast. “I had stayed quiet for years hoping it would fade away, but instead it got worse.” 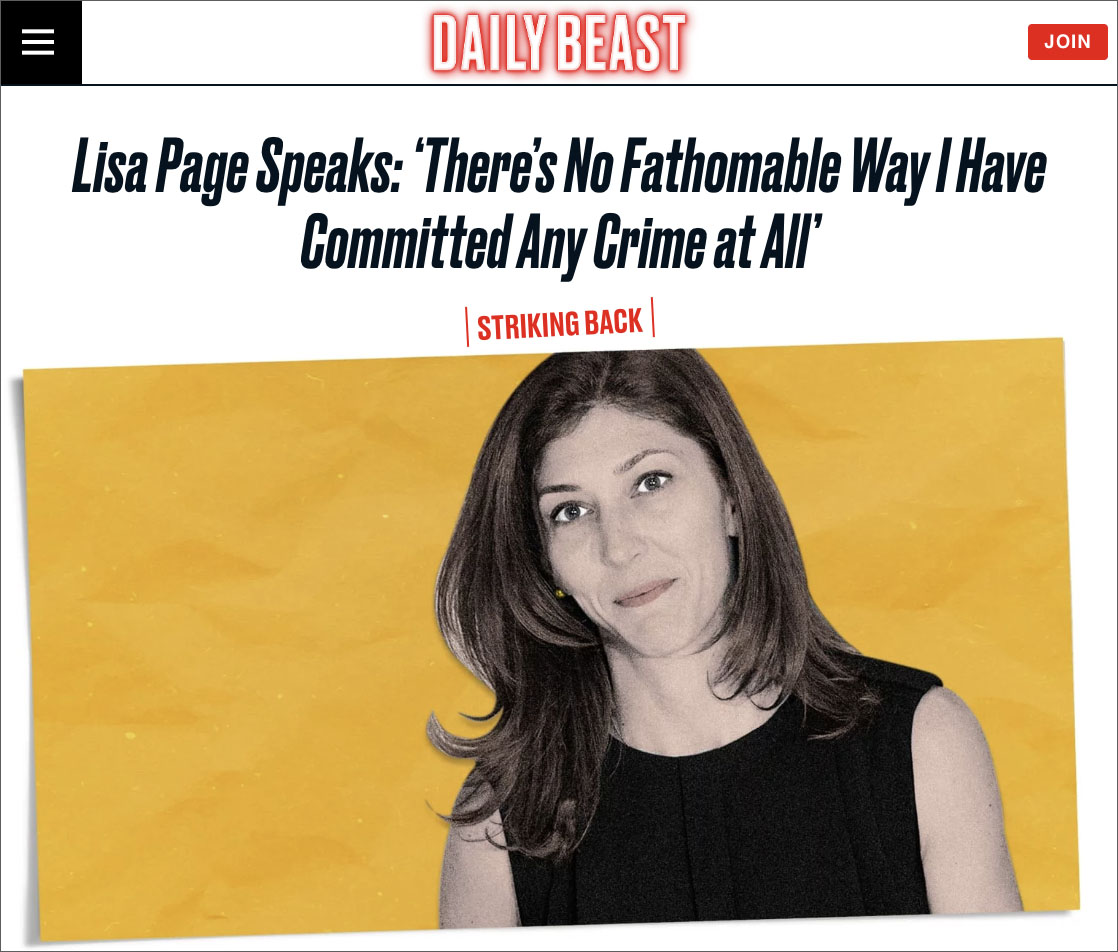 “It had been so hard not to defend myself, to let people who hate me control the narrative. I decided to take my power back,” she added.

“It’s almost impossible to describe” what it’s like, Page said of Trump’s scathing criticisms. “It’s like being punched in the gut. My heart drops to my stomach when I realize he has tweeted about me again. The president of the United States is calling me names to the entire world. He’s demeaning me and my career. It’s sickening.”

“I’ll get a text from a friend alerting me to an outrageous tweet by the president and my first question is always—is it about me? Often the answer is yes,” she said.

Page then complained about the Justice Department’s decision to release her text messages with Strzok, saying they “lacked context” despite the fact she testified to investigators that her biased anti-Trump texts “mean exactly what they say.”

“So things get worse,” Page said. “And of course, you know, those texts were selected for their political impact. They lack a lot of context. Many of them aren’t even about him or me. We’re not given an opportunity to provide any context. In a lot of those texts we were talking about other people like our family members or articles we had sent each other.”

Page also tried to spin the facts about what exactly launched the FBI’s counterintelligence probe into Trump’s campaign, claiming the FBI received a “predication” from Trump associate George Papadopoulos.

“There are two things that happen in the late summer of 2016,” Page says. “The first, of course, is that the FBI gets the predication [courtesy of loose-lipped George Papadopoulos], which starts the Russian investigation. We learn about the possibility that there’s someone on the Trump campaign coordinating with the Russian government in the release of emails, which will damage the Clinton campaign.”

That is a lie. Papadopoulos didn’t meet with Russian government officials in 2016 — he was set up by the FBI to meet with their asset, a professor named Joseph Mifsud in London.

FBI agent Strzok even admitted to Page in a 2016 text that “there’s no there there” regarding Russia collusion evidence.

Page also claimed the notion the FBI was spying on Trump is “just false,” despite extensive evidence showing FBI spying.

“We were very deliberate and conservative about who we first opened on because we recognized how sensitive a situation it was,” Page says. “So the prospect that we were spying on the campaign or even investigating candidate Trump himself is just false. That’s not what we were doing.”

This is another lie — court documents from 2018 revealed that the FBI employed multiple spies to infiltrate the Trump campaign, including Cambridge professor Stefan Halper, who approached both Papadopoulos and Trump campaign associate Carter Page in an undercover honeypot operation.

Page even lamented how “devastating” it was for her when FBI Deputy Director Andrew McCabe – who is now under criminal investigation – was fired in 2018 for lying to investigators.

“It was horrible,” Page said. “It was a devastating moment at the FBI. It was like a funeral, only worse, because at least when someone dies, you get to come together and celebrate and talk about that person. He was still alive. But he was inaccessible to us. It jolted the ranks and the investigation. It was so abrupt. He was there one day and gone the next.”

Page is simply trying to get ahead of the damaging fallout from IG Horowitz’s upcoming FISA report, which will likely implicate her in FBI wrongdoing pertaining to unlawful spying of Trump’s campaign that was predicated on the Steele dossier paid for by Hillary Clinton’s campaign and the Mifsud/Papadopoulos set-up by the FBI.

President Trump reacted to Page’s interview on Monday, reminding voters to take a look at her and Strzok’s text messages speaking of an “insurance policy” should he win the 2016 election.

“When Lisa Page, the lover of Peter Strzok, talks about being ‘crushed,’ and how innocent she is, ask her to read Peter’s ‘Insurance Policy’ text, to her, just in case Hillary loses. Also, why were the lovers text messages scrubbed after he left Mueller. Where are they Lisa?” Trump tweeted.

When Lisa Page, the lover of Peter Strzok, talks about being “crushed”, and how innocent she is, ask her to read Peter’s “Insurance Policy” text, to her, just in case Hillary loses. Also, why were the lovers text messages scrubbed after he left Mueller. Where are they Lisa?

Evelyn Farkus has now admitted that the Obama administration spied on the Trump campaign. Alex Jones exposes the Deep State actors that seek to abuse their authority to gain power.