A Loudoun County Sheriff blasted Loudoun County Public School (LCPS) Superintendent Scott Ziegler for accusing the Sheriff’s department of shirking its responsibilities regarding a sexual assault that took place in a high school bathroom, according to correspondence reviewed by the Daily Caller.

“We are committed to providing our community with good, solid information as we work to provide all students with a safe learning environment,” Ziegler said. “During the quarterly crime update to the Loudoun County Board of Supervisors on November 3, Col. Mark J. Poland of the Loudoun County Sheriff’s Office suggested that your offices notified the Loudoun County Public Schools of charges in the Stone Bridge High School sexual assault case.”

“LCPS cannot confirm that we have received the required notification of charges from the Loudoun County Sheriff’s Office regarding this case,” Ziegler concluded.

Sheriff Chapman denied Ziegler’s accusations and said that the superintendent was “unmistakably aware” of the assault as Ziegler “personally reported” the offense to school board members, as previously reported by WTOP.

Chapman included a timeline in his Nov. 10 letter that detailed how Virginia Department of Juvenile Justice Officer Jason Bickmore was in charge of informing the school district, not the Loudoun County Special Victims Unit investigator.

The Sheriff told Ziegler that he appears to have lied to the school board and public about his knowledge of sexual assault taking place in an LCPS bathroom.

“Nothing in your letter addresses the following facts. That you knew of the alleged sexual offense the day it occurred. That despite a public statement at a School Board meeting on June 22, 2021 denying any knowledge of sexual assaults in any LCPS bathrooms, you sent an email on May 28, 2021 to members of the school board advising them of the incident — thus invalidating your public statement,” Chapman wrote. 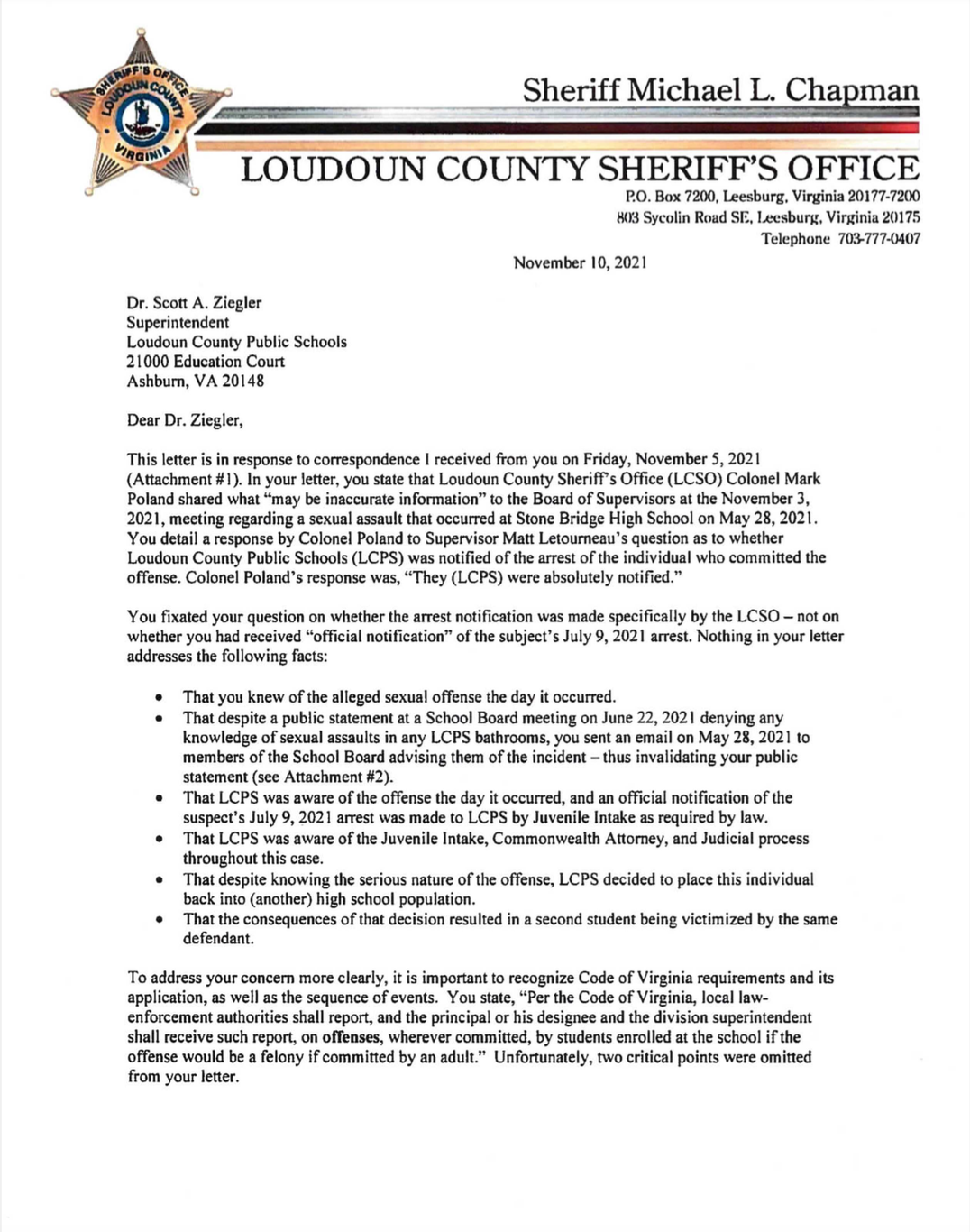 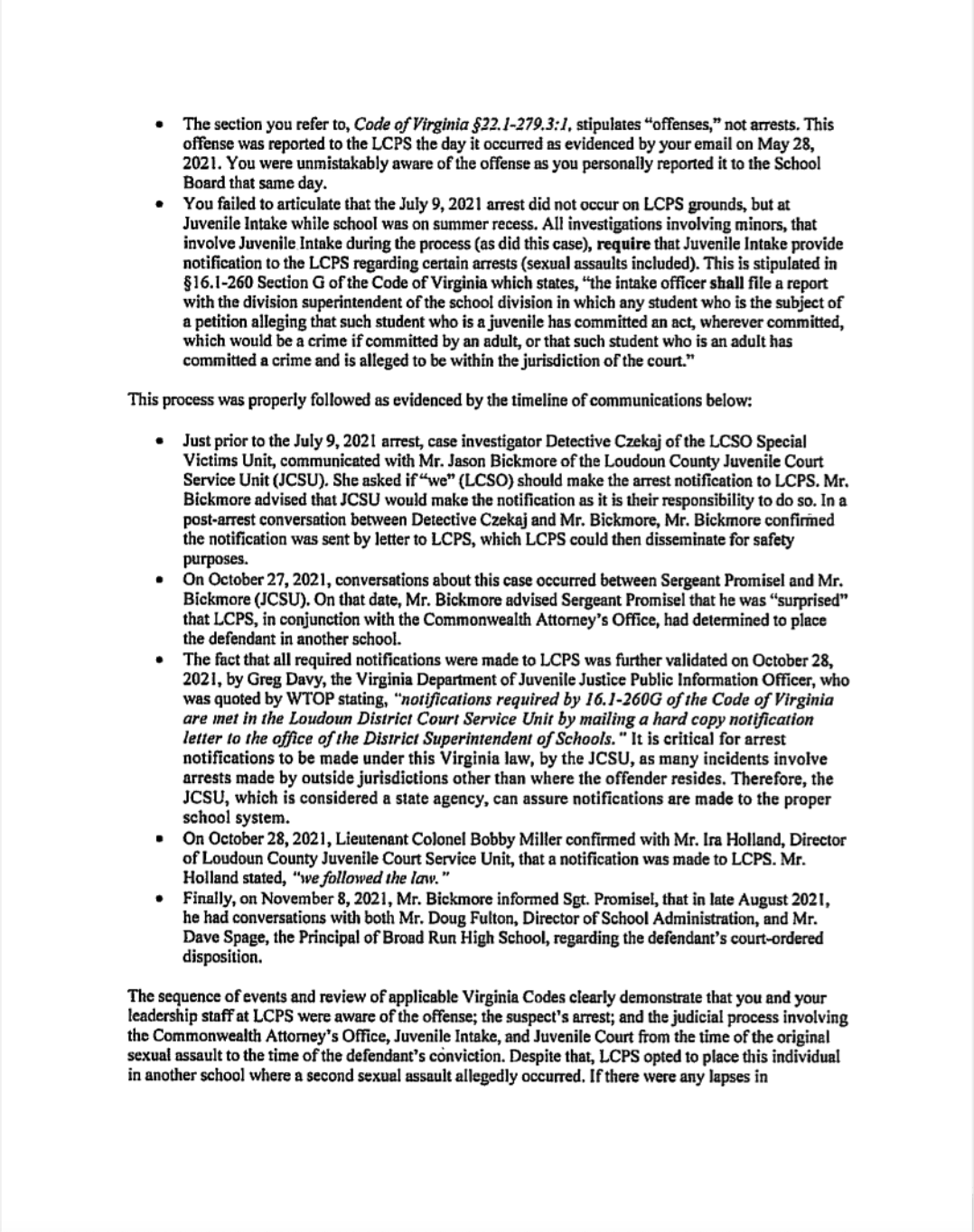 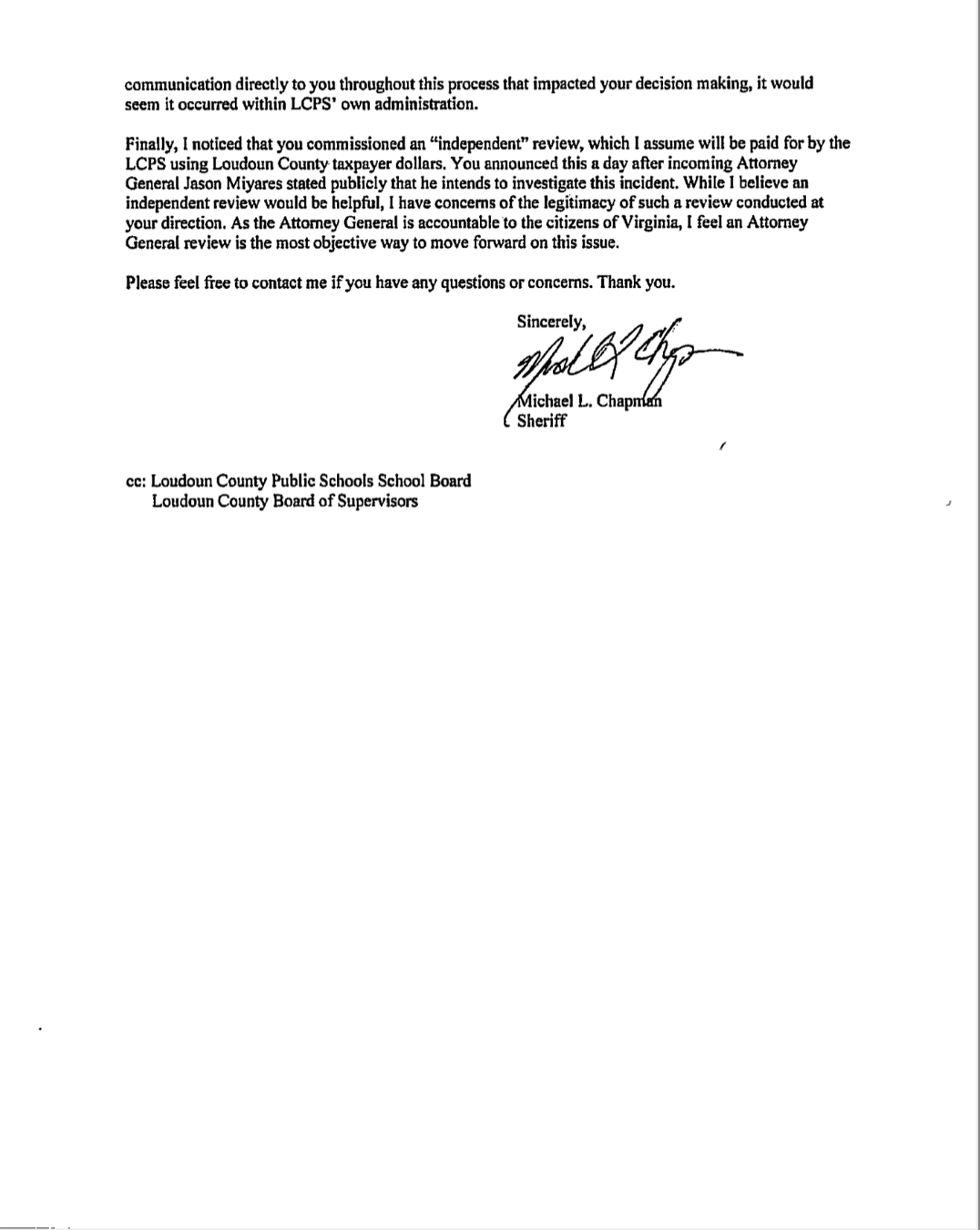 LCPS, under the guidance of Commonwealth Attorney Buta Biberaj, transferred the student accused of rape from one high school to another where he went on to commit a second assault. Chapman implied that the district is responsible for the second assault due to the “serious nature” of the first offense. (RELATED: Loudoun County Attorney Tried To Prosecute ‘Domestic Terrorist’ Parent, Despite Pledging To End Mass Incarceration)

“The consequences of that decision resulted in a second student being victimized by the same defendant,” Chapman said.

The Sheriff also slammed Ziegler for the district’s “independent review” and questioned its legitimacy.

“I noticed that you commissioned an ‘independent’ review, which I assume will be paid for by the LCPS using Loudoun County taxpayer dollars. You announced this a day after incoming Attorney General Jason Miyares stated publicly that he intends to investigate this incident,” Chapman said. “I have concerns of the legitimacy of such a review conducted at your direction. As the Attorney General is accountable to the citizens of Virginia, I feel an Attorney General review is the most objective way to move forward on this issue.”