Phil Rockstroh muses on how the impulse to possess an unlimited number of firearms fits into the late-imperium scheme of things.

Tucson, Arizona, shopping center where U.S. Rep. Gabrielle Giffords and more than a dozen others were victims of a shooting attack on Jan. 8, 2011. (Steve Karp, CC BY 3.0, Wikimedia Commons)

The U.S.  is less of a nation than a collective, psychotic episode.
Within day-to-day life in the nation, a cultural aura exists that shifts, mingles and merges between a sense of nervous agitation and displaced rage, in combination with a sense of weightlessness. The fragmented quality of daily life imparts an insubstantial, unreal quality wherein the citizenry of the capitalist/consumer empire of hungry ghosts drift through a nadascape comprised of ad hoc, fast-buck-driven, suburban/exburban architecture and the ersatz eros of constant, consumer come-ons.
Yet beneath the nebulous dread and nettling angst of it all, there exists the primal human imperative for connection and social communion i.e., authentic eros. The most lost among the lost in the ghostsphere of the collective mind attempt to animate the realm of shades with libations of blood. The gods of the capitalist death cult demand no less.

Where does an impulse to possess an unlimited number of firearms fit into the scheme of things?  A firearm’s heft, for one. The weapon’s substantial feel, when held and hoisted, serves, provisionally, to mitigate a psychical sense of weightlessness. The act of engagement eases nervous agitation.  Gun reality offsets the weightless content of media reality. Focus is achieved when one aims the weapon on a target. Nebulous dread transforms into adamantine purpose. The presence of an Angel of Death will focus the mind. The ground, for the moment, feels solid beneath one’s feet. Hence, there arrives a craving, in the sense of addiction, to hoard the object that provides relief; in addition, massive quantities of ammunition must be stored as emotional ballast.

The mystifying, rankling, uncontrollable criteria of this weightless Age and the white noise of uncertainty seem to yield to the clear and decisive crack of a rifle shot. Relief is imagined in the concomitant carnage. The late British author Rebecca West captures the phenomenon in her book, “Black Lamb and Grey Falcon:”

“Only part of us is sane: only part of us loves pleasure and the longer day of happiness, wants to live to our nineties and die in peace, in a house that we built, that shall shelter those who come after us. The other half of us is nearly mad. It prefers the disagreeable to the agreeable, loves pain and its darker night despair, and wants to die in a catastrophe that will set back life to its beginnings and leave nothing of our house save its blackened foundations.” 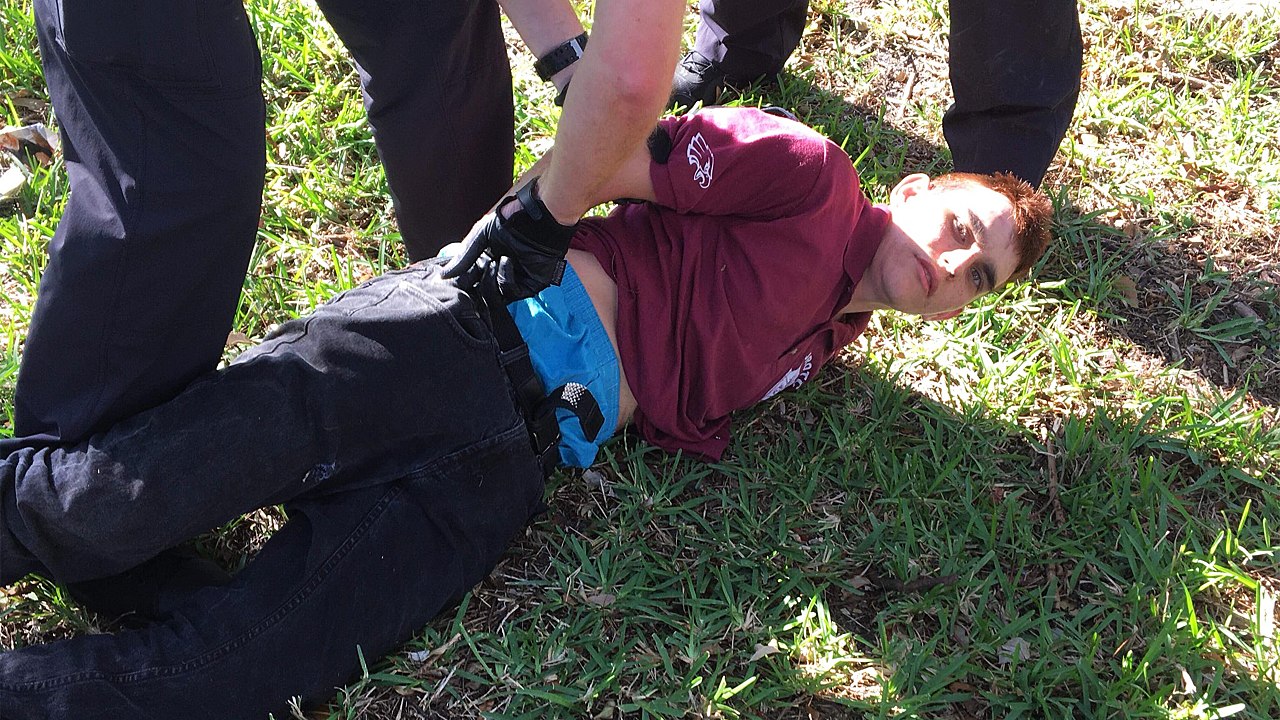 Because we, on a personal level, in most cases, choose the primary option, our hidden, shadow half will live out the latter on a collective basis. During the blood lust on display at President Donald Trump’s rallies, the mob finds a collective comfort zone in catastrophic longings. The domestic landscape of paranoia works on behalf of the profiteers of perpetual war, perpetrators of the U.S.-created deathscapes overseas, and vice versa, in a self-resonating feedback loop of carnage.

In our era, in which, the U.S. empire is in decline and the white supremacist order is giving way, Trump’s frightened legions feel as if their identity is under siege. Seal off the nation’s borders. Construct an unscalable wall. Create a cordon sanitaire to protect and preserve racial purity. A strong authority figure is craved to set the world back in order. The phenomenon could be termed, Authoritarian Simpatico Syndrome (ASS) — a pathology manifested in personality types who have been traumatized by the authoritarianism of the U.S. socio-political milieu but who seek to assuage their hurt and humiliation by identification with the very forces responsible for their torment. It’s the stuff of a cultural nervous breakdown.

To that end, according to its own laws, the nation’s citizenry, sufferers of mental distress, should be restricted from purchasing a gun. Yet without a doubt, the most disturbed of all are the nation’s political class, those responsible for gun legislation. There is compelling evidence that they present a clear and present danger to themselves and others. The political class is a menace to society; they make decisions, more often than not, based on delusional thinking, that are responsible for harm on a massive scale. They should be subject to institutional-style restraint, within the confines of the most heavily secure, lockdown ward in an asylum for the criminally insane. 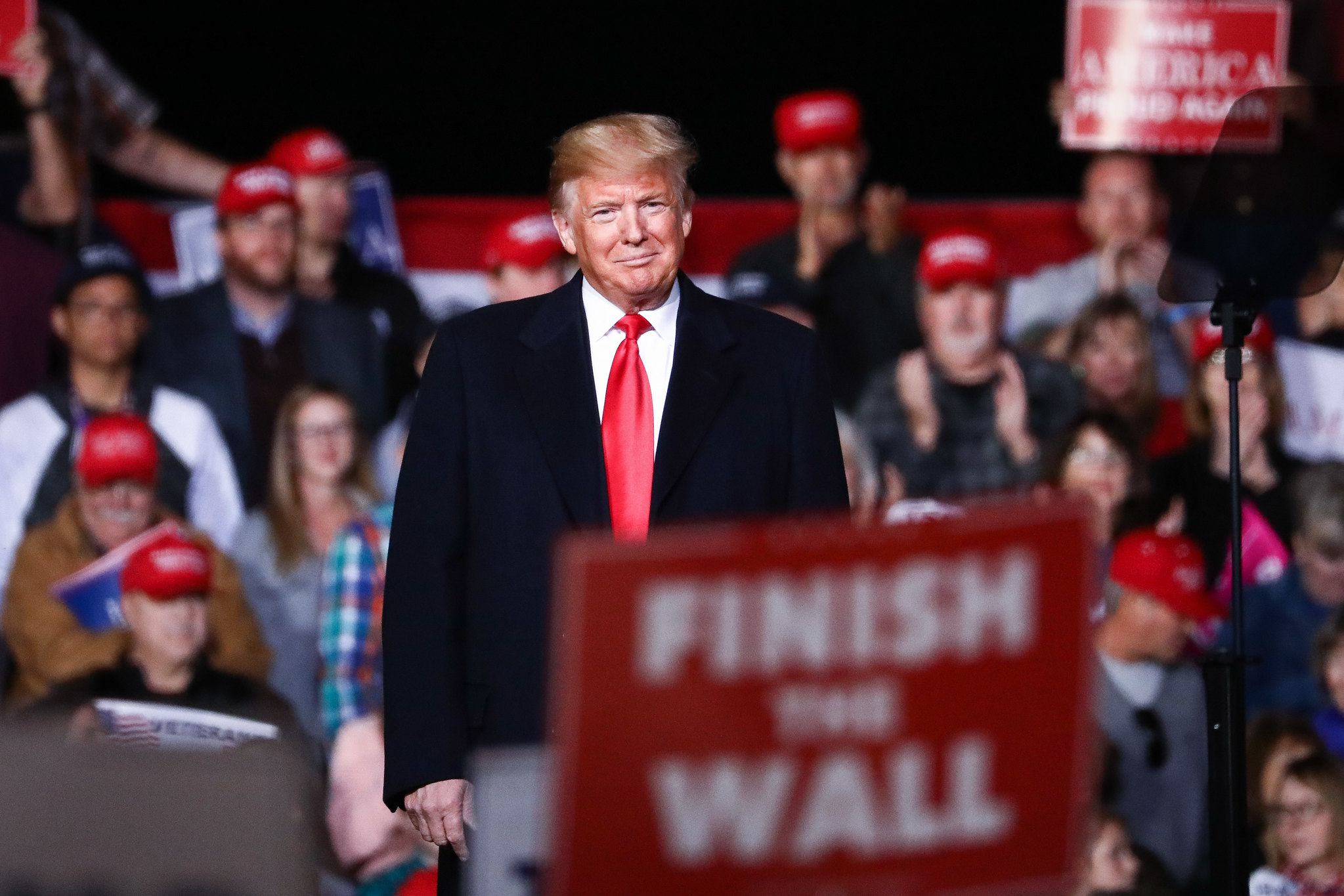 Although the so-called mentally ill, as a rule, are not any more inclined to commit violent crimes than are the general population of capitalist dystopias. The U.S. was founded in genocidal violence and the fortunes of its ruling class’ are protected by the state sanctioned violence of the police and are bloated by the violence inherent to imperialist shakedown operations.

It comes down to this: In our emotionally brutal era, those deemed mentally ill are suffering from capitalism. The pummeling stress and boot-in-the-face, hierarchy-inflicted humiliations inherent to the system inflict trauma on large swathes of the citizenry.

Epidemic levels of middle-aged U.S. citizens are dying with needles in their arms. The inherent and internalized white supremacy of the societal order has been exacerbated by Trump’s self-serving, reckless agitprop and acts in a drug-like manner causing dopamine levels to rise in those experiencing emotional torment due to humiliation-caused despair. Demagogues such as Trump are aware and exploit the manner in which despair can be mitigated by the emotional displacement of rage.

Fascist insignias rise when the hopes and aspirations of the working class lie shattered across a capitalist economic wasteland. Hoisted torches provide the illusion that dark despair has been banished. The fascist mob becomes possessed by a belief that they, en masse, can ascend into the precincts of heaven by scaling a mountain of corpses comprised of outsider groups.

Fascism acts as an anesthetic to the wounds delivered by capitalism. It is also a psychoactive drug; its incantatory rhetoric and imagist psychical material provides an intoxicating, crude allure.

Capitalism is borne on manic wings. The economic elite move from corporate skyscrapers and high-rise rooftops in order to travel by helicopter, where upon landing, they board private, luxury jets, then, whereupon landing again, they are transported by helicopter to corporate skyscrapers and high-rise rooftops. Touching the Earth is a fleeting experience. The ruling class have lost touch with ground-level verities. In a classical sense, such displays of hubris were understood as the progenitor of madness. The gods first elevate those they drive mad. 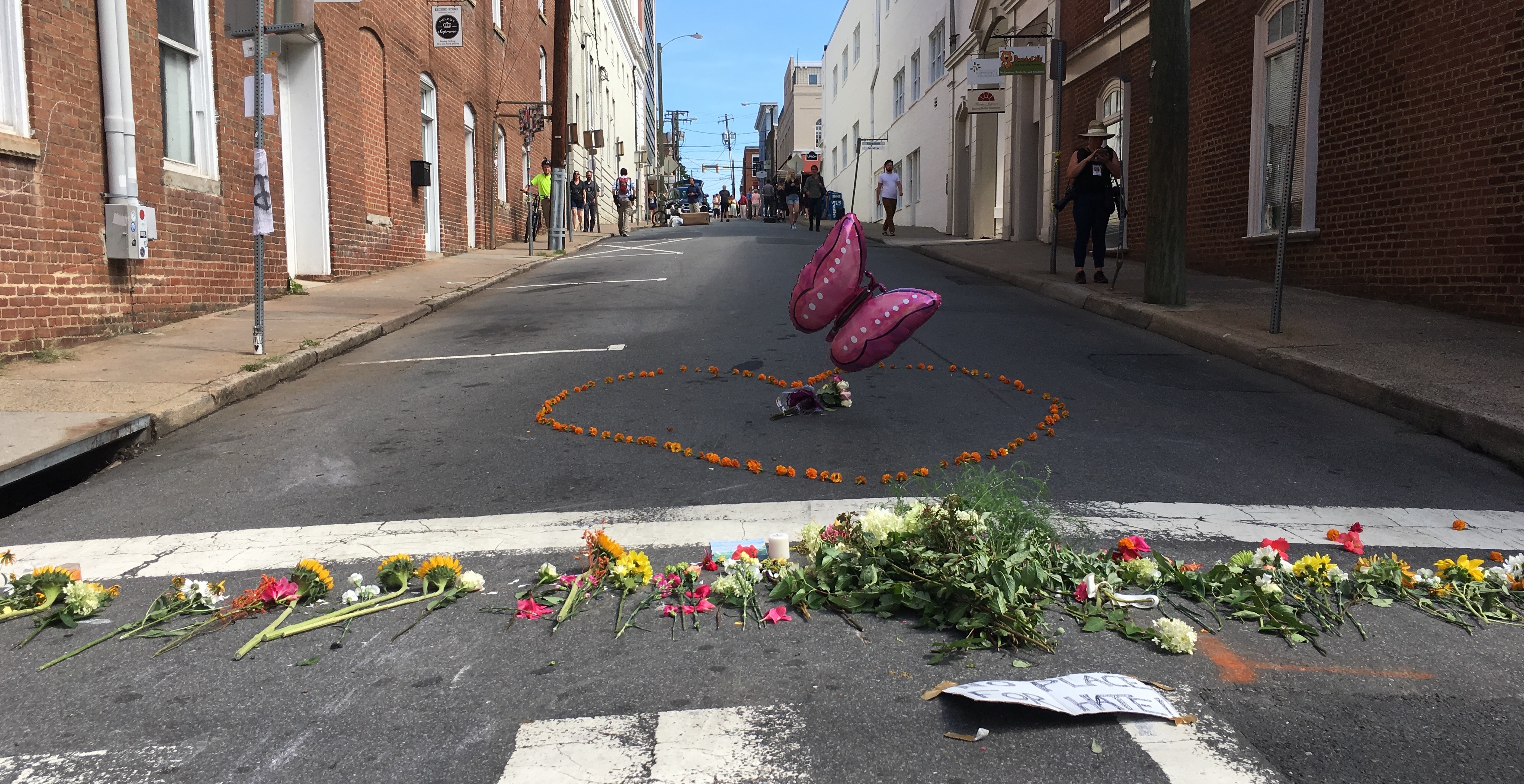 Memorial in Charlottesville, Virginia, for Heather Heyer at the site of her death during a white supremacist rally. (Evan Nesterak. CC BY 2.0, Wikimedia Commons)

And, yes, race-based fears and animus are in play.  Racism engendered mass murder has been coming to pass since armed Europeans trudged ashore in the Americas, with their blood-sodden religion and their murderous craving for gold and land. Of course, the racist demagoguery of the Bloated Orange Tub of Nazi Goo oozing into and agitating the limbic systems of violent cretins during homegrown Nuremberg Rallies and his compulsion to blitzkrieg the pixel-sphere with Der Stürmer tweets is fomenting racist mayhem that includes bacchanals of blood. U.S. mythos is rancid with the reek of the corpses of the innocent slaughtered by white men brandishing firearms. Mass murderers have been and continue to be enshrined as heroes, from Wounded Knee to Afghanistan.

The nation was established by gun-enabled genocide and the intimidation of African slaves held at gunpoint on capitalist plantations. The truth has never been faced e.g., the suppression of the Nixon tape in which Ronald Reagan displayed his racist mindset.

The U.S. citizenry thanks the soldiers of its racist wars of aggression for their “service.” The origins of perpetual shooting sprees can be traced to the heart of darkness of the nation and its concomitant white supremacist creed. The killings happened long before the rise and election of the Tangerine Tweet Führer. Of course, the racist shit-heel Trump has exacerbated the situation. He deserves all scorn cast his way. It is obvious his capacity for malice does not possess a governor’s switch.

Trump is a two-legged emblem of the hypertrophy at play in late U.S. imperium. Gun-inflicted violence is steeped into the blood-stained fabric of the U.S. (sham) republic. Withal, Trump is not an anomaly; he is an emblem. Gun-strokers are no more going to shed their mythos than liberals and progressives are going to shed theirs that the U.S. is a democratic republic, governed by the rule of law, and progressive reforms will be implemented by its High Dollar owned and controlled political class that will serve to turn around the trajectory of the blood-built and maintained U.S. empire.

Phil Rockstroh is a poet, lyricist and philosopher bard living, now, in Munich. He may be contacted: philrockstroh.scribe@gmail.com and at FaceBook: http://www.facebook.com/phil.rockstroh