“There is a crisis in the Queens and the Bronx and it’s called AOC,” Scherie Murray told the Daily Caller.

That crisis inspired Murray to announce her candidacy as a Republican candidate for New York’s 14th congressional district this July.

“I’m running to put the issues we face on the forefront and make sure there is positive change in our community,” Murray said.

Murray has an impressive background. Her website states that, after being born in Jamaica, she “came to New York City with her family when she was nine” and grew up in Southeast Queens. Scherie taught gymnastics for an after-school program in Far Rockaway, Queens. She started her own company, The Esemel Group in 2004, that focused on “the lack of minorities in media.” Esemel helped “generate employment opportunities for minorities in New York City.” (RELATED: This Jamaican Immigrant Is Running As A Republican Against Ocasio-Cortez)

Given her roots, her entrepreneurship, and her history of helping her community, Scherie Murray would seem like an ideal candidate in her district. After witnessing Ocasio-Cortez’s victory over the Democrat establishment, Murray soon found herself “appalled at the self-promoting, socialist agenda she brought.” 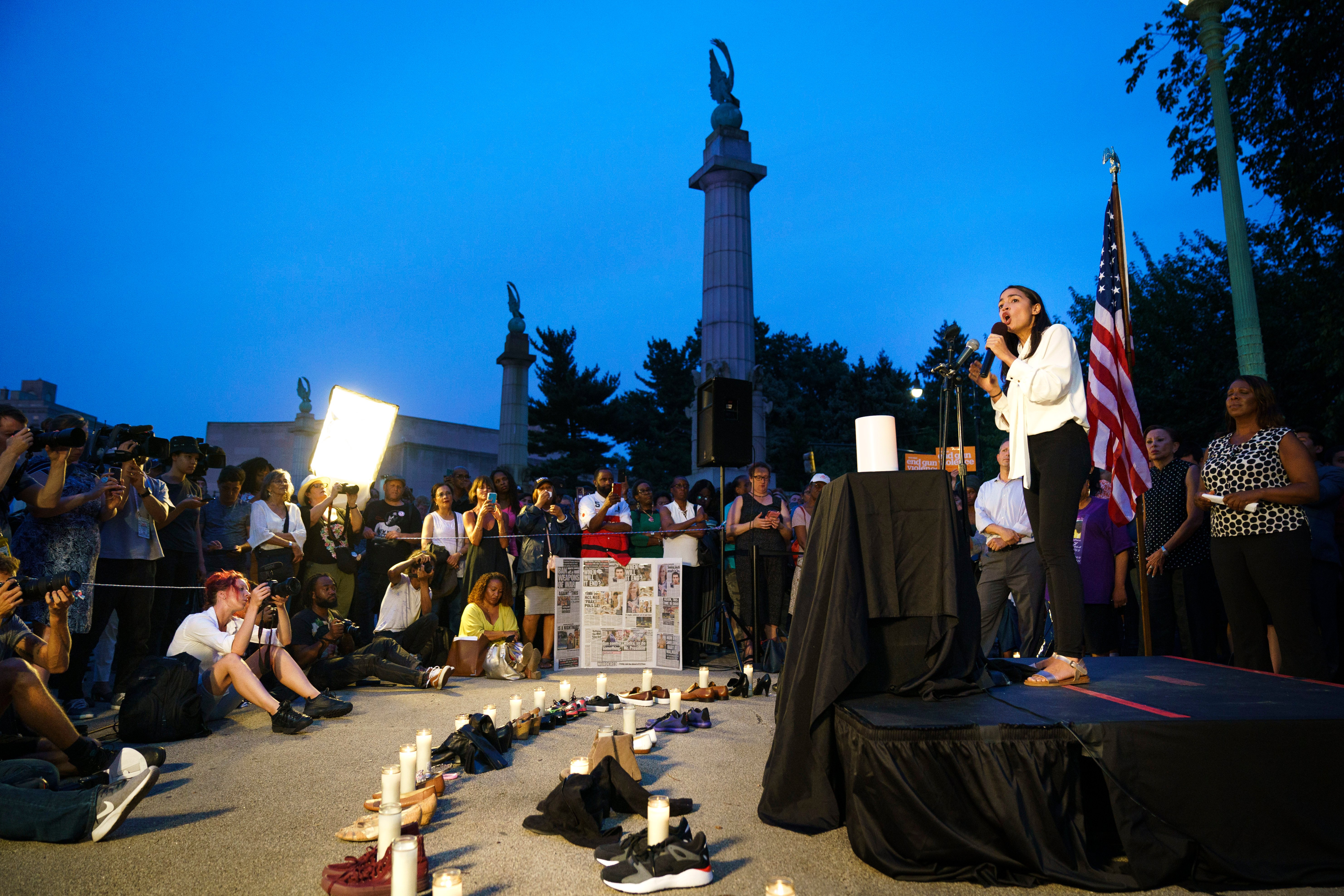 NEW YORK, NY – AUGUST 5: U.S. Rep. Alexandria Ocasio-Cortez (D-NY) speaks during a vigil for the victims of the recent mass shootings in El Paso, Texas and Dayton, Ohio, in Grand Army Plaza on August 5, 2019 in the Brooklyn borough of New York City. Lawmakers and local advocates called on Congress to enact gun control legislation and encouraged citizens to vote for politicians who would support those measures. (Photo by Drew Angerer/Getty Images)

In contrast to Congresswoman Alexandria Ocasio-Cortez, Murray believes she offers a better option for New Yorkers in her district. “I’d focus on immigration, infrastructure, and education – actually focus on them,” Murray told the Daily Caller. “I watched AOC take out the Democratic establishment, but nothing has changed. She has demonstrated time and time again, with the job killing Green New Deal and dangerous rhetoric, that she cares more about her Twitter account than her community.”

As a Republican candidate, Murray faces an uphill battle. She is running in a district that has had only one Republican representative in nearly 100 years, Guy Molinari (and his daughter Susan Molinari who was elected to finish her father’s third term). That being said, Murray feels she offers a Republican alternative that will focus on the constituents rather than partisan political games.

“We will show how Republican ideals are better for NY14 and will campaign door-to-door in the district for each vote. Republican and conservative policies help develop strong families and stronger communities. I plan to articulate that throughout my campaign,” Murray told the Daily Caller. “Step one is showing up. Step two is showing that we understand and care. We can’t expect a vote we don’t ask for, and we can’t expect to make a friend with someone we never reach out to. Queens and the Bronx will absolutely hear from me, see me in the community, and our campaign will ensure that the community has a seat at the table in Washington.”

The demographics of New York’s 14th congressional district is comprised of mainly minorities — nearly 50% Hispanic, 16% Asian and 11% African-American. As a Republican candidate, Murray will have to sell the Republican Party to them, and she’s trying her hardest.

“President Trump’s economic policies have made huge gains for minorities across the country,” Murray added. 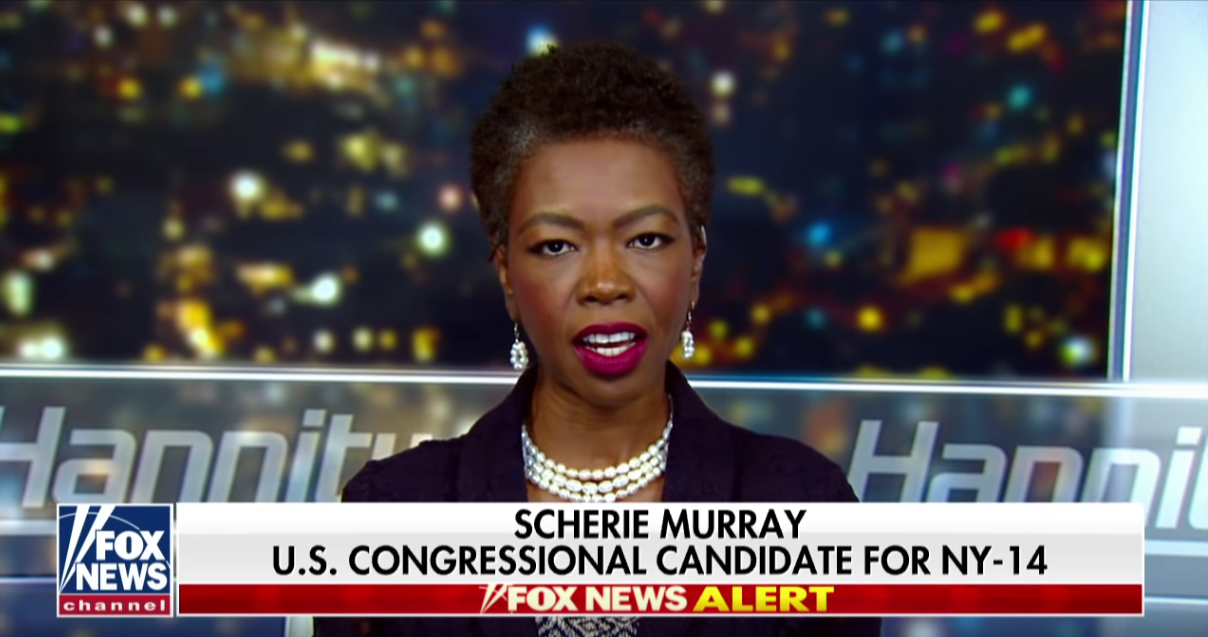 Strong family values are important to her, and she believes they are vital to the success of minorities in this country. “I am pro-life. I also understand that abortion is having a devastating effect on the African-American population, with abortion rates on the rise over the last decade. I strongly believe that just because the start of a family isn’t planned, we as a community must not give up on developing stronger families,” Murray said. “Life is beautiful, and to give life is a gift from God. Abortion should never be seen as the only option, and if we are going to grow as a community it starts with making sure there is every chance and opportunity to grow strong families.”

While Murray has expressed strong, conservative values, some are skeptical of her conservatism based on her previous tweets and voter registration. “Look this is the same tired play from the same tired insider, cocktail crowd playbook. They tried the same thing with Donald Trump in the presidential primary when they said he was really a Democrat – in fact they tried the same thing with Ronald Reagan,” she said. “I was a Democrat and changed my registration to Republican over a decade ago. I vote for the person. I was inspired by President Obama, but there were things he did I was disappointed in. I voted for President Trump and support him 100% today.”

And about her tweets congratulating Ocasio-Cortez? (RELATED: Ocasio-Cortez Takes Another Whack At Electoral College, Calls It ‘Affirmative Action’ For Rural Americans)

“When did we get to the point where you cannot congratulate each other? I have never supported nor have I ever endorsed AOC. After she won, I rose above party differences and congratulated her,” Murray told the Daily Caller. “I was hopeful she would bring change to the district and have been appalled at the self-promoting, socialist agenda she brought instead.”

“I am a Republican and an advocate for conservative ideals because I believe we must preserve the Party’s rich anti-slavery history and advance policies that better the lives of all Americans,” Murray said. “Republicans are the party of opportunity and self-sufficiency. Most liberal Democratic policies result in a greater dependency on government and higher taxes. ‘Free’ health care, ‘free’ education, ‘free’ housing isn’t free.”

Murray is determined to mount a significant challenge to the socialist tyro in the upcoming election. Some speak of breaking glass ceilings in politics, but in a heavy Democratic district, against a media darling incumbent, Scherie Murray is looking to shatter them.