Prince Harry and Meghan Markle will no longer use the titles His/Her Royal Highness as they “are no longer working members of the Royal Family”, according to a statement released by Buckingham Palace.

After speculation in the recent weeks following the Duke and Duchess of Sussex’s surprise announcement that they will be stepping back as “senior” royals, Buckingham Palace has released briefings over the couple’s official position within the Royal household.

In a statement from Her Majesty The Queen published on Saturday night, Queen Elizabeth II said:

Following many months of conversations and more recent discussions, I am pleased that together we have found a constructive and supportive way forward for my grandson and his family.

Harry, Meghan and Archie will always be much loved members of my family.

I recognise the challenges they have experienced as a result of intense scrutiny over the last two years and support their wish for a more independent life.

I want to thank them for all their dedicated work across this country, the Commonwealth and beyond, and am particularly proud of how Meghan has so quickly become one of the family.

It is my whole family’s hope that today’s agreement allows them to start building a happy and peaceful new life.

A further statement from Buckingham Palace clarified the statuses of the couple, including that they will no longer be receiving public funds, and will no longer be using the titles His Royal Highness, which implies Harry’s princely status, and Her Royal Highness, which was bestowed upon American former television actress Meghan Markle when she married Prince Charles’s younger son. 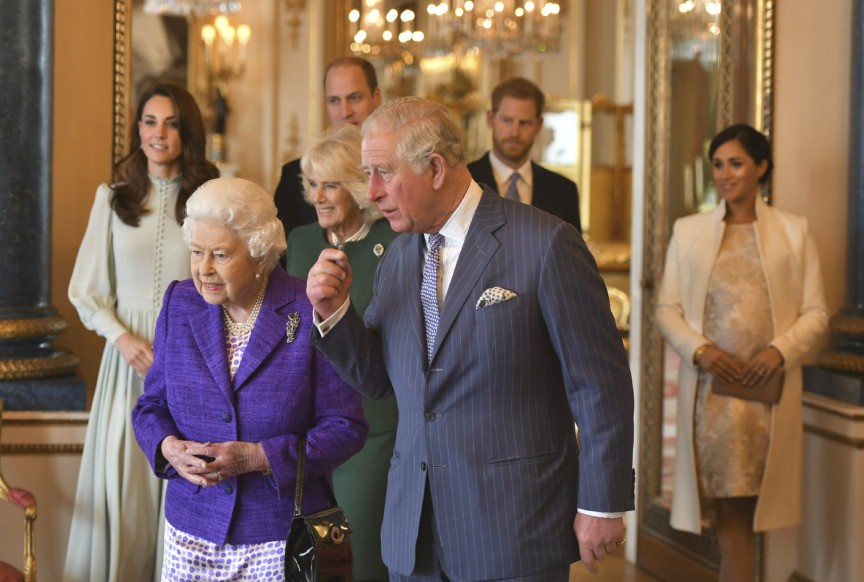 In this March 5, 2019 file photo, Britain’s Queen Elizabeth II is joined by Prince Charles, the Prince of Wales, and at rear, from left, Kate, Duchess of Cambridge, Camilla, Duchess of Cornwall, Prince William, Prince Harry and Meghan, Duchess of Sussex during a reception at Buckingham Palace, London to mark the 50th anniversary of the investiture of the Prince of Wales. In a statement issued on Monday, Jan. 13, 2020, Queen Elizabeth II says she has agreed to grant Prince Harry and Meghan their wish for a more independent life that will see them move part-time to Canada. (Dominic Lipinski/Pool via AP, File)

“As agreed in this new arrangement, they understand that they are required to step back from Royal duties, including official military appointments. They will no longer receive public funds for Royal duties,” the statement said.

“The Sussexes will not use their HRH titles as they are no longer working members of the Royal Family.”

In terms of financing the couple post-Megxit, as well as no longer receiving funds from the Sovereign Grant, the couple has said they will repay the expenditure for the refurbishment of Frogmore Cottage, which cost taxpayers £2.4 million. The property “will remain their UK family home”.

“Buckingham Palace does not comment on the details of security arrangements. There are well established independent processes to determine the need for publicly-funded security.

“This new model will take effect in the Spring of 2020,” the statement concluded.

Sources speaking to Sky News have said that the couple will retain their titles the Duke and Duchess of Cambridge. Prince Harry, born a prince to the Prince of Wales, will remain a prince.

Bernie Sanders Received Briefing On Russian Attempts To Help Him In 2020 Election And Sow Further Discord Among U.S. Voters