Border officials are trying to manage an influx of migrants at the southern border, and a growing number are of Mexican origin, a Pew Research survey showed.

Although many media outlets have focused on Central Americans as making up most apprehensions at the U.S-Mexico border, this demographic is shrinking as Mexican migration grows, according to Pew.

Forty-two percent of people apprehended at the southwestern border in February were of Mexican origin, a 13% increase from May 2019. People from El Salvador, Guatemala, and Honduras accounted for 46% of apprehensions that month, a decrease from 78% in May 2019. 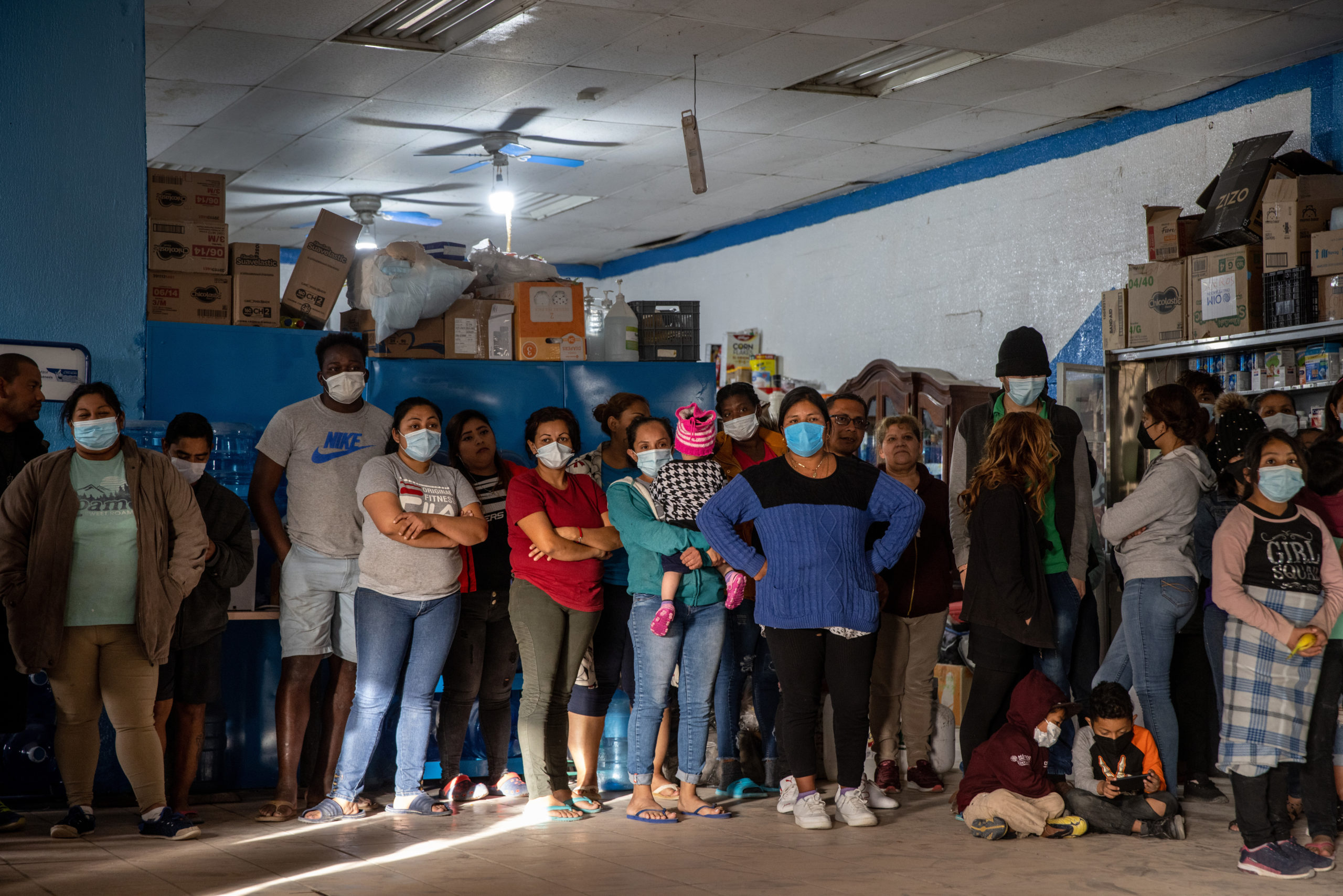 Asylum seekers attend a meeting at an immigrant shelter on March 16, 2021 in Ciudad Juarez, Mexico. A surge of immigrant families and as many as 13,000 unaccompanied minors now in U.S. custody, according to CBS News, is causing a humanitarian crisis at the U.S.-Mexico border. (Photo by John Moore/Getty Images)

Many media outlets have focused on migration from Central America rather than Mexico, often citing natural disaster and other hardships as among the reasons people fled the region.

“Most are fleeing violence, natural disasters and economic hardship in Central America,” the Guardian reported in the context of a Biden administration official’s visit to Mexico and Guatemala to discuss the increase in migrants.

“Central America has recently been battered by hurricanes and slumping economies in the wake of the COVID-19 pandemic, which has spurred more migration,” according to a Reuters report explaining why so many unaccompanied children come to the U.S.

A CNN report from mid-March similarly focuses on Central Americans: “And when asked whether Biden was worried that letting more refugees in now would signal to people in Central America that the US is open to more immigration, [White House press secretary Jen Psaki] reiterated the sentiment that the administration wants its actions to be effective.”

More than 100,000 illegal immigrants were encountered by Customs and Border Protection in February, according to acting commissioner Troy Miller. Nine thousand of those were unaccompanied minors, which is nearly triple the amount that tried to cross in February 2020.

Republicans have accused Biden of fueling the ongoing crisis at the southern border by dismantling Trump-era migration policies.

Among the policies the Biden administration has rolled back is the Trump administration’s Migrant Protection Protocols (MPP), which was launched in 2019 and forced individuals entering or seeking admission to the U.S. from Mexico to be returned there to wait for immigration proceedings, according to the Department of Homeland Security.

Under the policy, 65,000 non-Mexican migrants were sent back to Mexico, according to Reuters. Biden suspended new entries into the program when he took office, and the officials announced in February they would begin processing about 25,000 migrants with active claims in the program.

Although the Biden administration suspended new entries into the program, it was unclear how people enrolled in it would be brought into the U.S. 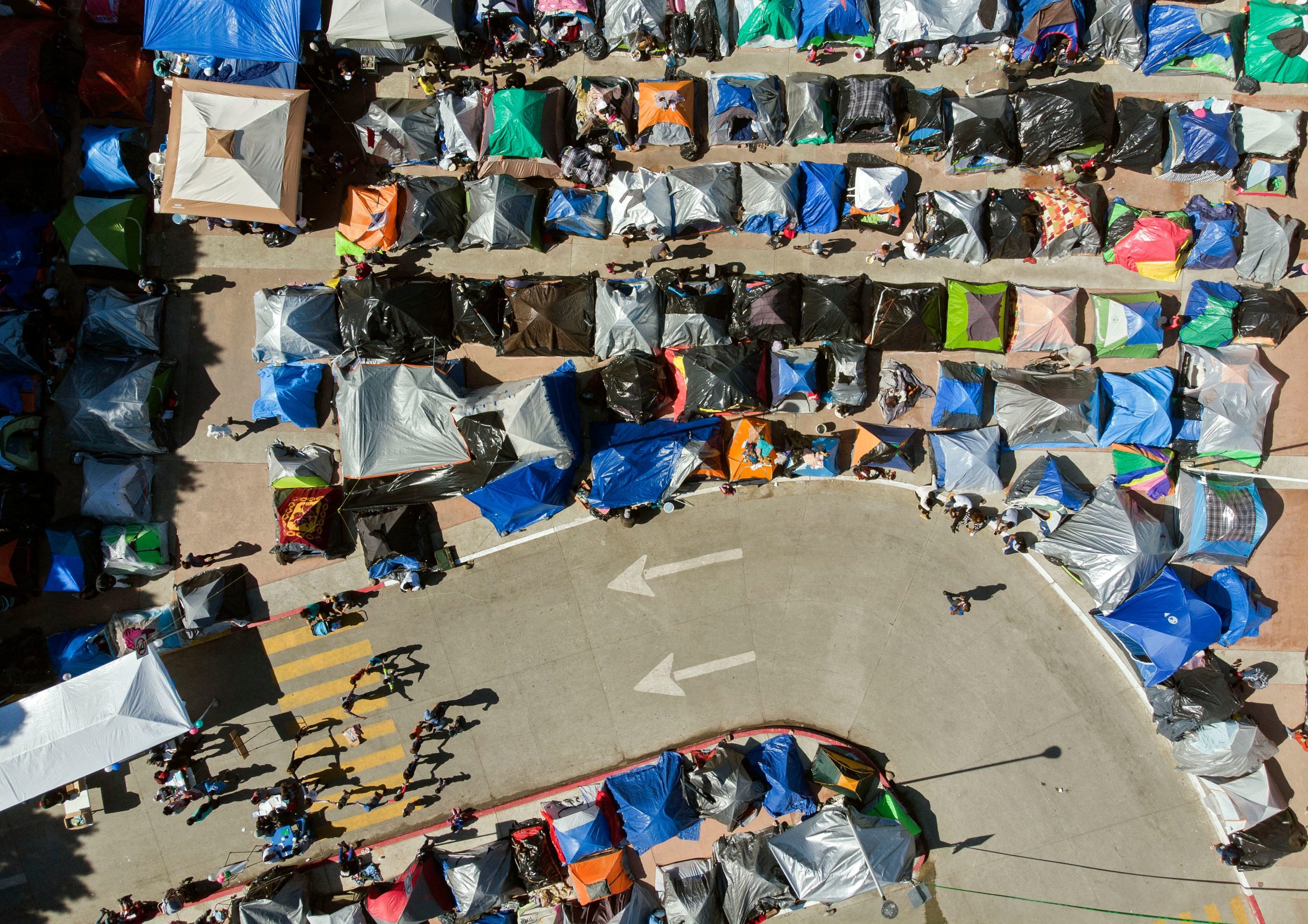 Aerial view of a migrants camp where asylum seekers wait for US authorities to allow them to start their migration process outside El Chaparral crossing port in Tijuana, Baja California state, Mexico on March 17, 2021. (Photo by GUILLERMO ARIAS/AFP via Getty Images)

The migrants’ claims would initially be heard at three ports of entry along the border, but the administration declined to identity which ports due to concerns that migrants would rush to the locations, according to Reuters.

The Biden administration has emphasized that migrants should not attempt to come to the U.S. due to the pandemic and limited capacity to process asylum seekers. Mexican President Andres Manuel Lopez Obrador urged migrants to not believe human smugglers who say the “gates of the northern border are open,” according to Reuters.

The U.S. House passed two bills Thursday which would provide a pathway to citizenship for “Dreamers” and legal work status to illegal immigrants currently working on American farms.

Too woke for the Pope? Pope Francis nixes mass with Joe Biden [Video]