According to a new LendingTree study, Michigan has the highest probability of entering an economic downturn later this year. 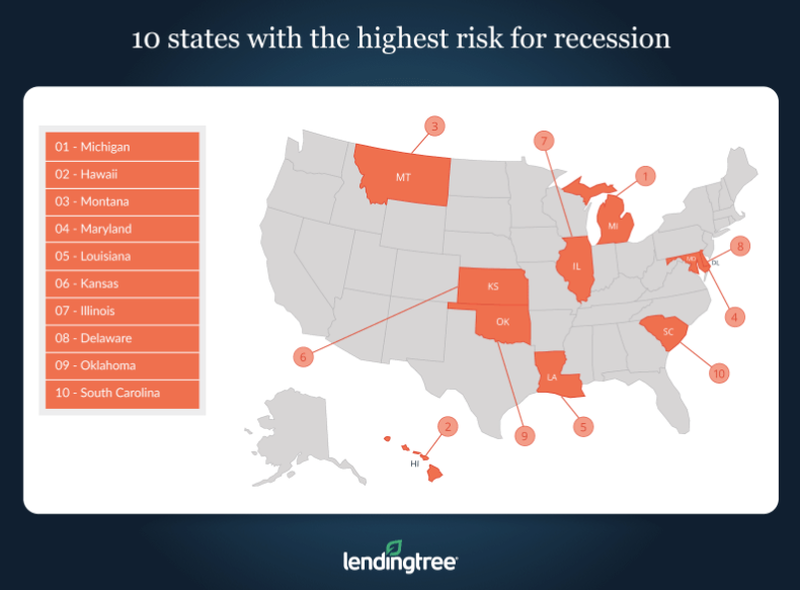 If the coincident index, created by the Federal Reserve Bank of Philadelphia to gauge economic development in a state’s economy, has YoY growth rates for two or more consecutive quarters, then LendingTree said a recession would be imminent.

Michigan is expected to be a big 2020 election battleground for President Trump. He unexpectedly won Michigan in the 2016 presidential election by telling voters he was going to make manufacture boom again.

However, President Trump faces tremendous headwinds with a rapidly slowing economy in Michigan ahead of the election year. Nevertheless, the country’s overall economy is faltering, now suffering from growth rate cycle downturns in industrials, inflation, and employment.

It’s not just Michigan, but the rest of the country has been battered by a manufacturing and transportation slowdown this summer. The slowdown started before the trade war but has been certainly amplified by the escalation of tariffs on Chinese imports, and even retaliatory tariffs on US exports to China, such as automobiles from Detroit.

LendingTree said Hawaii and Montana have the next highest probabilities of recession risk for 4Q19. Nebraska, Oregon, and Idaho had the lowest chance of recession.

The study said most states aren’t facing significant recession risks in the next several months, but with consumer sentiment starting to turn and an economy that continues to slow, recession risks for individual states will likely continue to increase into 1H20.

With manufacturing and transportation recessions festering across the country, the last domino to fall has been the consumer, which continues to prop up the overall economy. The belief is that a strong labor force will power the economy through 2020. But it’s the slowing job growth factor that could soon wane on animal spirits and shift consumer sentiment lower.

That said, the dominos of a more widespread economic downturn are starting to materialize. Nearly 60% of Americans now say a recession is “very likely” or “somewhat likely” in the next year, according to a new Washington Post-ABC News.

A much broader slowdown, if not recession, is likely coming to the US. It should now make sense why President Trump is on Twitter begging every day for 100bps rate cuts, quantitative easing, and emergency tax cuts – that is because the cycle has already turned down.

As some have said, the weakest fall first. Michigan could be the first state to drop the ball on the “greatest economy ever,” likely damaging President Trump’s chances of winning the state during the 2020 election. As for the rest of the country, a recession could be here as soon as late next year.

GOP Rep. Kinzinger: Trump’s Behavior Has ‘Definitely Been Erratic at the End’