The letter, a copy of which a Republican Hill staffer received in an email and provided to Breitbart News, is typed on USCP letterhead and claims to be from “Proud Members of the United States Capitol Police.”

“We members of the United States Capitol Police write this letter to express our profound disappointment with the recent comments from both chambers’ minority leaders expressing no need for a January 6th commission,” the letter begins. 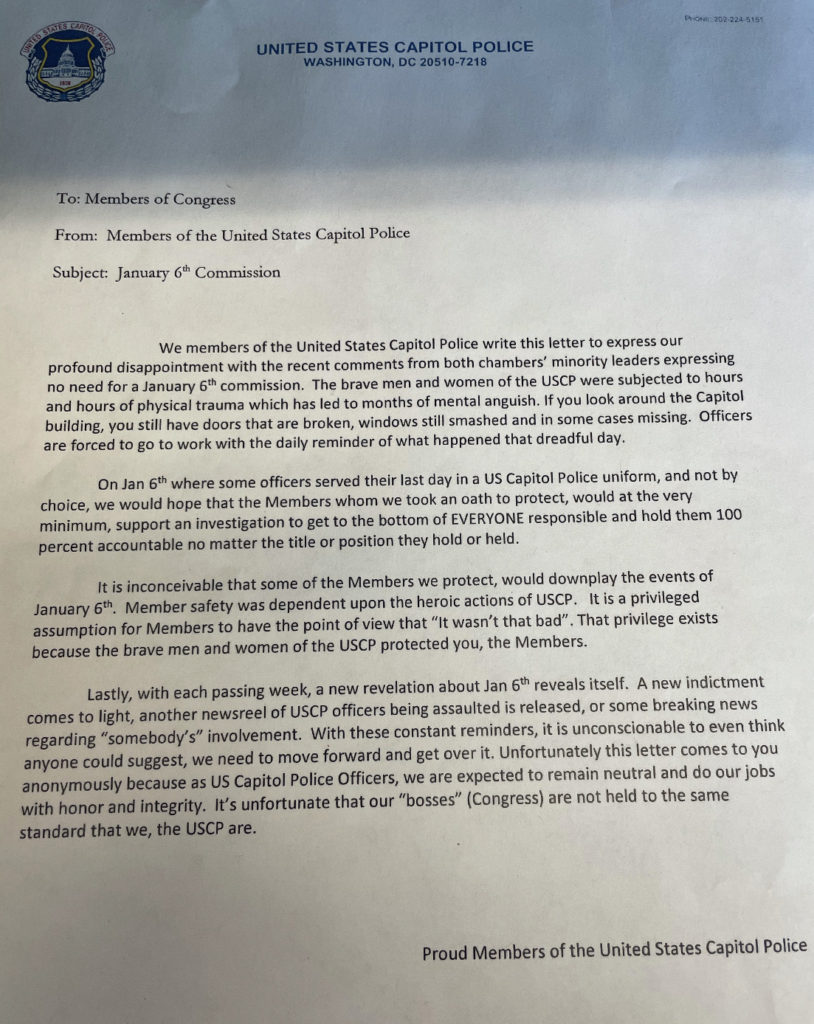 The USCP quickly released a statement as the letter made its rounds denying it supports the letter’s message, saying, “This is NOT an official USCP statement. The Department has no way of confirming it was even authored by USCP personnel,” adding the department “does not take positions on legislation”:

USCP does NOT take positions on legislation. pic.twitter.com/LSu38jbIqd

CNN reported it “spoke to the officer who wrote the letter who said it represents the views of 40-50 officers” but caveated the outlet “could not independently verify other officers supported the letter.”

Rumors that the letter initially came from the office of Raskin, an impeachment manager during this year’s impeachment proceedings against former President Donald Trump, were corroborated by Fox News’s Jacqui Heinrich, who posted to Twitter a screenshot of the original email from Raskin’s office.

The email stated, “Mr. Raskin has been in discussions with several rank-and-file Capitol Police officers who are his constituents. … Attached is a letter from unnamed officers (who remain anonymous because they are afraid of retribution of speaking out)”:

Rep. Raskin COS says Raskin has been in talks w/ USCP officers *who are his constituents* since 1/6- adding letter slamming GOP leaders is anonymous over retribution. It’s unclear if the letter was signed by ONLY or MORE than Raskin constituents. Raskin was an impeachment manager pic.twitter.com/OyyMli4DjO

The January 6 Commission, a proposal from Pelosi designed to investigate the January 6 riot at the U.S. Capitol, was approved by the House Wednesday, 252–175. While 35 Republicans voted in favor of the measure, House Minority Leader Kevin McCarthy (R-CA), Senate Minority Leader Mitch McConnell (R-KY), and newly-elected House Republican Conference chair Rep. Elise Stefanik (R-NY) have been actively advocating against it.

The proposal now awaits a Senate vote and will require 60 votes to overcome a filibuster, but with a 50–50 evenly divided upper chamber and firm opposition from Republican leadership, as well as from some moderate Republicans, the path to obtaining 60 votes is unclear.