An anonymous text message containing deceptive information about Virginia gubernatorial candidate Pete Snyder was blasted to voters’ phones Friday with less than two months to go until the state’s nominating convention to select a Republican candidate for governor.

The message framed Snyder as praising President Joe Biden, pulling out-of-context quotes Snyder made on Fox News in 2012. In reality, Snyder’s full commentary from the segment was an unequivocal condemnation of Biden for the effects his and former President Barack Obama’s policies had on the middle class during their first term in office.

A screenshot of the text message, received by a registered Virginia Republican on Friday and provided to Breitbart News, is below: 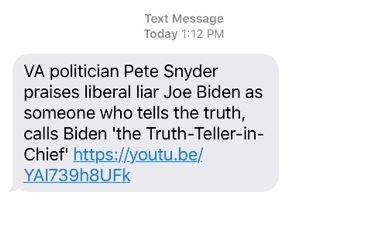 The message directs its recipient to a YouTube clip of Snyder’s Fox News appearance, but that clip cuts Snyder off after 20 seconds.

In the full clip Snyder, who was serving as chair of the Republican group Virginia Victory at the time, actually mocks Biden for a gaffe he made during a speech in which he appeared to mistakenly admit his policies have hurt the middle class. Watch the full clip below:

Snyder’s campaign first discovered the text message after receiving what it described to Breitbart News as dozens of reports from activists who had received it.

It is unclear who was responsible for the attack on Snyder, a frontrunner in a crowded field of potential Republican nominees, and Snyder’s campaign indicated in a statement to Breitbart News it believed Democrats or teachers’ unions were behind the effort.

“These dishonest attacks underscore how afraid Democrats and teachers unions are of Pete’s campaign for governor. In a desperate and amateurish stunt, they’re willing to manipulate videos to try to portray him saying the exact opposite of what he actually said,” Snyder campaign spokeswoman Lenze Morris stated.

“The bottom line: these false attacks from Pete’s opponents, teachers unions, and Democrats are getting more and more desperate because, as they have openly admitted, Pete is the one candidate they fear most in November,” Morris added.

On the Democrats’ side, former Virginia Gov. Terry McAuliffe, a longtime Clinton ally, is the frontrunner as current Democrat Gov. Ralph Northam’s term expires this year.