Scientists at Rice University converted the corpse of a wolf spider into a device used to manipulate and grip objects, according to a study published on Wiley Online Laboratory.

The project, led by mechanical engineering PhD candidate Faye Yap, takes advantage of a basic property of spider biology, spiders’ ability to control the extension of their legs by controlling the amount of blood in them, according to Science News. Spider corpses naturally curl up after death, with no blood to apply pressure to the limbs, but Yap realized that it was possible to inject fluid into a corpse to apply this pressure. (RELATED: Scientists Create Zombie Pigs In Attempt To Revive Dead Organs)

“This area of soft robotics is a lot of fun because we get to use previously untapped types of actuation and materials,” said Daniel Preston, Yap’s PhD advisor and member of Rice University’s George R Brown School of Engineering, in a statement. “The spider falls into this line of inquiry. It’s something that hasn’t been used before but has a lot of potential.”

To develop the “gripper,” Yap’s team inserted the needle of a syringe into the body of a spider, then, by injecting and extracting liquids from the syringe, it was possible to force the legs of a spider to open and close, according to the study. 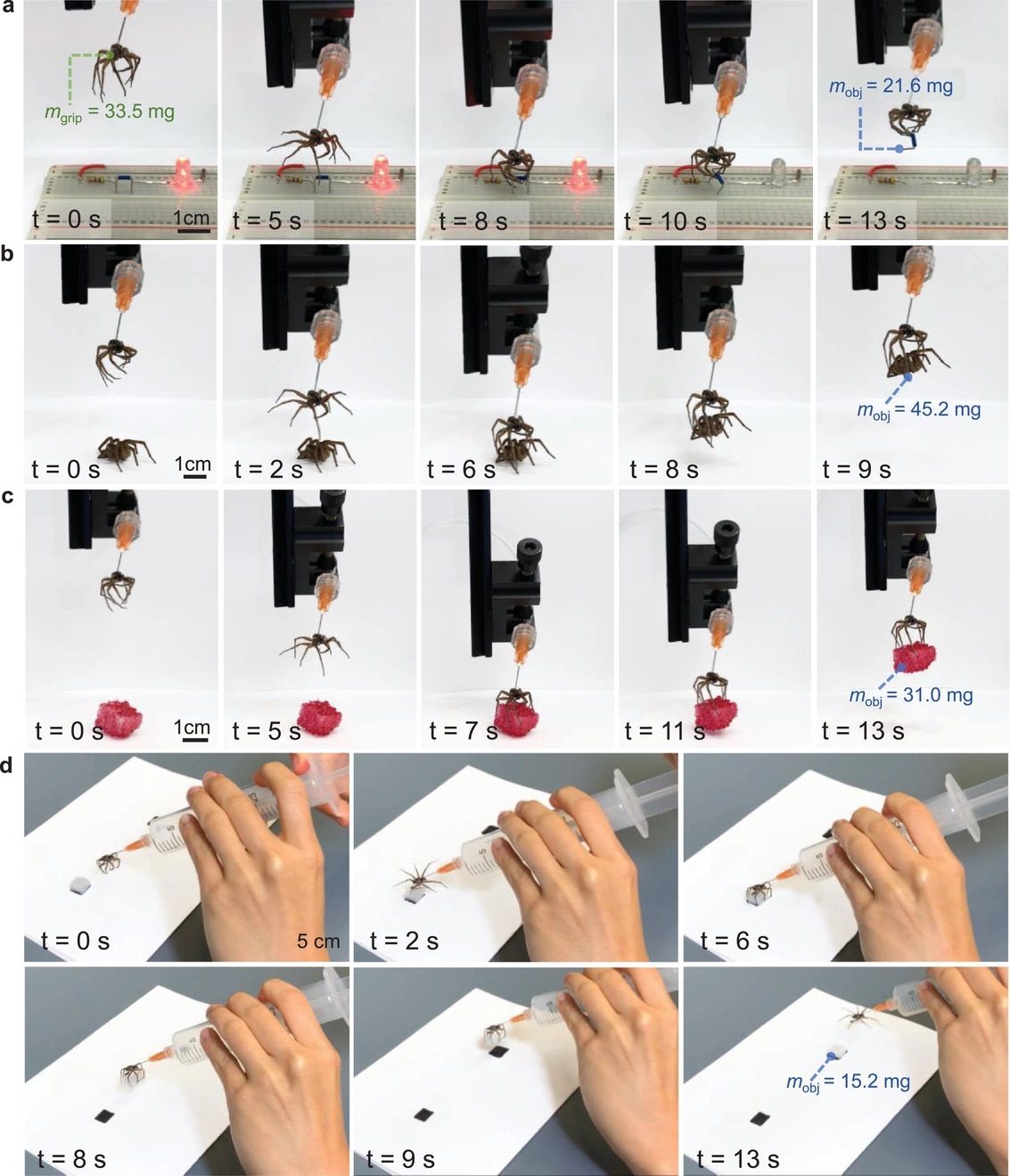 A figure from the Yap et. al’s report, detailing the various ways in which they were able to successfully manipulate the corpses of spiders to lift objects ranging from 21 to 45 mg, with a spider corpse that weighed only 33.5 mg.

Yap and her team argue in their study that the applications of what they have dubbed “necrobotics,” or the use of deceased biological material in robotics, could enable engineers and researchers to develop machines that “will not significantly contribute to waste streams.”

Additionally, since spiders are naturally camouflaged in certain environments, devices based on the “necrobotics” principle could be used to acquire “small and delicate samples in an unobtrusive and ecofriendly manner.”

The team intends to develop devices that allow them to move the legs of a deceased spider individually, and to examine the use of other creatures with similar bodies, such as scorpions, according to the study. They will additionally explore ways to reduce the effects of wear and tear on the spider bodies, investigating ways to apply sealants that will allow them to be used longer, Yap told Science News.

The use of animal corpses in this context is new, and the ethical boundaries are not well defined, Yap told Science News. “No one really talks about the ethics.” she told the outlet.

“Despite looking like it might have come back to life, we’re certain that it’s inanimate, and we’re using it in this case strictly as a material derived from a once-living spider,” Preston said in the University’s statement, stressing that since the spiders remain dead he does not believe there are any ethical concerns like those that may be related to reviving dead creatures.

Yap did not immediately respond to the Daily Caller News Foundation’s request for comment.

REP. JASON SMITH: Democrats Should Heed Their Own Advice — Don’t Raise Taxes During A Recession

New York State Official: Polio Case May Be ‘Tip of the Iceberg’ with Hundreds More Infected