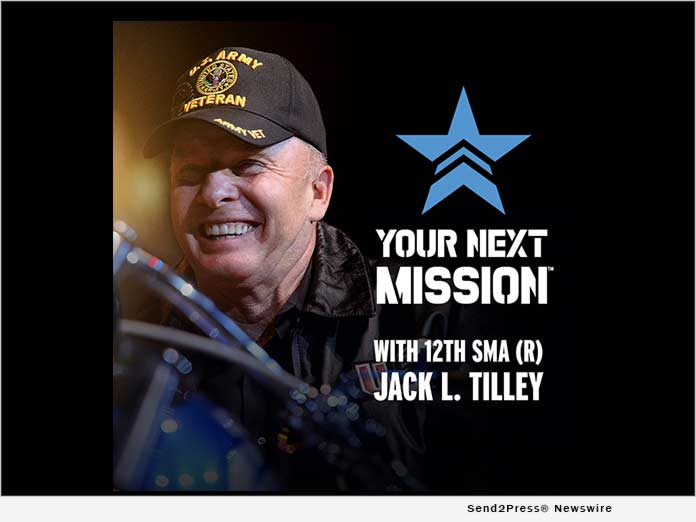 12th Sergeant Major of the Army, Jack L. Tilley, Retired, to Host ‘Your Next Mission’ Podcast Series to Support Warriors Transitioning from Military to Civilian Life

NASHVILLE, Tenn. /CitizenWire/ — The American Freedom Foundation announces Your Next Mission™– a new initiative supporting our Veterans, transitioning service members, and military spouses as they transition from military to civilian life. The goal of Your Next Mission™ is to help our Veterans write the next chapter of their lives and to make a real impact in the lives of those who have served our country.

12th SMA (R) Jack L. Tilley states, “Your Next Mission is an extension of AFF’s long-standing mission of helping Veterans and families. It is something I’ve devoted my life to and will continue until the day I die.”

Your Next Mission™ assistance to Veterans and their families will include:

*The Your Next Mission™ podcast hosted by Jack L. Tilley, 12th Sergeant Major of the Army and Co-Founder of the American Freedom Foundation. Created in partnership with Cloudcast Media, the podcast features insightful conversations with subject matter experts from the military and civilian communities.

*Providing specialized services such as understanding VA benefits and entitlements, employment, healthcare, education, and many others subjects through strategic partnerships with other nonprofit VSOs.

*Creating outreach programs to educate our country about the service and the sacrifice our military service members and their families make each and every day, and the positive difference they can make in the civilian world.

The podcast is available at https://yournextmission.org/ and all of your favorite podcast channels.

For more information, please email us at SMATilley@yournextmission.org, or call (844) 424-1134 and visit www.YourNextMission.org.

In return for their service and sacrifices made for our country, the American Freedom Foundation, founded in 2004, believes Veterans, military service members, and their families are deserving of support that empowers and enables them to lead confident and productive lives. AFF serves and supports them by creating awareness and building support for their service, sacrifice, and needs through partnerships with military-focused organizations and always will be relentlessly driven to bettering the lives of these heroes and their families.

Throughout its short history, the American Freedom Foundation has made grants of approximately $1.2 million to more than 30 military organizations and awarded over 1,200 full and partial scholarships to military spouses and their dependents in 50 states and 8 countries through the AFF/Purdue University Global Military Scholarship program valued in excess of $9.2 million. Through the AFF national Veteran’s employment initiative program, Warriors To The Workforce, thousands of Veterans have been connected to hundreds of participating companies for employment opportunities. Please reach out to us at www.americanfreedomfoundation.org

A native of Vancouver, Washington, Tilley was sworn in as the 12th Sergeant Major of the Army on June 23, 2000, and served until January 15, 2004. A career soldier, he had held many leadership positions within the Department of the Army and Unified Command environments.

As Sergeant Major of the Army, Tilley served as the Army Chief of Staff’s personal advisor on all enlisted-related matters, particularly in areas affecting Soldier training and quality of life. He devoted the majority of his time to traveling throughout the Army observing training and talking to soldiers and their families. He sits on a wide variety of councils and boards that make decisions affecting enlisted soldiers and their families and is routinely invited to testify before Congress.

After retirement, SMA Tilley has continued his advocacy for all service members and their families. He is co-founder of the American Freedom Foundation, a 501(c) 3 public benefit corporation organized to honor, serve and support our Veterans and the families of America’s armed forces and raise money and awareness through partnerships with military-focused organizations.

SMA Tilley has also become a successful management consultant, working with top Fortune 500 companies on a variety of projects and programs that are unique to the military community. He is President/CEO of J.Tilley Inc., founded in 2005. Co-founder of Pinnacle Five, LLC, marketing, consulting, and contracting company, crafted with members who held the senior enlisted position within the Army, Marines, Navy, Air Force, and Coast Guard.

A well sought-after public speaker, whose primary topic raises the public consciousness in support of military service members and Veterans. SMA Tilley is currently Senior Vice President for Leadership Development with NewDay USA, a senior advisor to the American Security Council Foundation, and a member of Mission Readiness: Military Leaders for Kids. He is also the author of his book “A Soldier’s Life.”

News: Owner of AJ’s Seafood & Oyster Bar Ranked as one of the Country’s Most Influential Restaurant Executives | CitizenWire